Wildlife Wednesday: what came first, the polar bear or the grizzly?

One question, two contrasting answers. Two studies examining the remains of polar bears that lived hundreds of thousands of years ago have found evidence of mating and substantial genetic mixing between ancient polar bear and brown bear populations. Interestingly, they disagree on the direction in which the gene flow occurred.

The first study, published in Nature Ecology & Evolution and co-authored by Canadian polar bear expert Ian Stirling, looked at DNA taken from the tooth of a polar bear that lived over 100,000 years ago on the Beaufort Sea near Point McLeod in Arctic Alaska. Their analysis showed massive amounts of prehistoric mixing between the two species took place during this time, around 400,000 years after the two species diverged, when climate change caused their ranges to overlap. Evidence of this today, according to their research, can be found in all brown bear genomes, but not in those of living polar bears. They also found the direction of gene flow to have been one way — from polar bear to grizzly.

The second study, published in Proceedings of the National Academy of Sciences, also examined DNA taken from an ancient polar bear tooth — this one taken from the skull of an approximately 100,000-year-old polar bear found in Norway’s Svalbard archipelago. The researchers, however, concluded that gene flow between the two species was far more complex and intertwined than the Nature study suggests, similar to that seen in human evolutionary history. And, strikingly, that gene flow ran primarily from brown bears to polar bears.

It’s well known that these two sister species of bear have historically mated. As climate change once more causes their ranges to overlap, their future may become as intertwined as their past. Although the new findings are somewhat contradictory, scientists will now be in a better position to understand the history between the polar bear and the brown bear as well as anticipate what might happen in the future.

A new, genetically distinct population of polar bears has been discovered in Southeast Greenland. They are isolated, thriving and — unlike any other polar bear population — inhabit an area totally devoid of sea ice.

The newly discovered Southeast Greenland polar bears exist in a world that closely resembles the High Arctic of tomorrow — or the late 21st century, to be exact. With no sea ice in sight, they hunt year-round on the freshwater ice at the foot of marine terminating glaciers, also called glacial mélange. The discovery, published in the journal Science, provides a ray of hope for the future of an iconic species that mostly relies on rapidly disappearing sea ice to hunt.

Hunting from freshwater ice at marine terminals is a previously unreported behaviour, and an important one too, as doing this allows polar bears to feast on seals, their prey of choice, year-round. Whereas other bear populations must traverse over land or follow receding sea ice into less productive polar areas during the ice-free season, this adaptation allows the Southeast Greenland bears to succeed in an otherwise inhospitable place.

While these habitats are uncommon in most of the Arctic, they exist in places like Greenland and Svalbard. Could such glacial mélange habitats one day serve as climate refuges for the polar bear populations of the future?

It’s a nondescript butterfly — small and dusty-white — that lives in the Arctic. But on a summer’s day in 2019 eagle-eyed butterfly spotter Siaja Parceaud-May noticed a Booth’s sulphur butterfly (Colias tyche) that had some “noticeable differences.”

Parceaud-May was about an hour north of her home community of Kuujjuaq in Quebec’s Nunavik region, working with a team of entomologists and researchers from the Montreal Insectarium to learn how to identify and collect butterflies.

She was butterfly watching on that fateful day as part of the Nunavik Sentinels program, a community science project and training program with the Insectarium in which Inuit and Cree youth aged 12-30 take part in documenting the natural world around them. The program teaches participants about insect monitoring, identification, preservation and the ecosystem of the North so they can join in amassing a much-needed inventory of the thousands of insect species in the region.

The butterfly was captured and sent it to Montreal for further analysis, then named this past spring in Parceaud-May’s honour — Colias tyche siaja — when it was confirmed that it was, indeed, a new subspecies.

The “breadbasket” of the Dehcho

Canada’s newest National Wildlife Area is Edéhzhíe, an enormously vast wilderness in the Dehcho Region of the Northwest Territories, more than twice the size of Banff National Park.

Edéhzhíe, a Protected Area since 2018, is made up of over 14,000 square kilometres of forest, lakes, rivers and uplands. This makes it a great home for Canadian wildlife, with many migratory bird species’ breeding grounds situated there, alongside classic Canadian fauna such as bears, lynx, caribou, moose and bison.

Edéhzhíe’s protection was initiated and currently managed by the Dehcho First Nations through guardian programs. One program in particular is Dehcho K’éhodi Stewardship and Guardian Program, with “Dehcho K’éhodi” translating to “taking care of the Dehcho”, which is what the program aims to do.

The permanent protection and designation of Edéhzhíe as a National Wildlife Area prevents any future energy or mineral development in the area. Support won’t be lacking either, with the federal government budgeting $10 million towards management and research in the area as well.

What do Canada’s High Arctic and Mars have in common? Quite a lot, actually — at least in the extremely salty, very cold, and almost oxygen-free environment under the permafrost of Lost Hammer Spring. Located on the remote, uninhabited island of Axel Heiberg, Nunavut, the spring’s extreme conditions were identified by McGill University researchers as a good place to learn more about the kinds of life forms that could once have existed — or may still exist — on Mars.

Their search was a fruitful one, as the researchers not only discovered never-before identified microbes, but were able to use new genomic techniques to gain insight into the microbes’ metabolisms. Their recent paper on the subject described, for the first time, that microbial communities found in Canada’s High Arctic can survive by eating and breathing simple inorganic compounds of the kind found on Mars.

So compelling were the findings that samples from Lost Hammer have been chosen by the European Space Agency to test the life detection capabilities of the instruments they plan to use on the next ExoMars Mission. 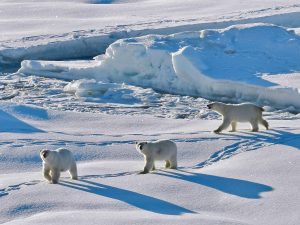 Sinking or swimming? The challenges of polar bear research in a changing Arctic

The latest population statistics reflect the expensive, dangerous and complex nature of polar bear research — but innovative new techniques may offer a solution