Resurgence of the wood bison

The wood bison population is recovering, thanks in part to a 1957 discovery

Decades of over-hunting had slashed the once-great wood bison population of North America to about 300 animals by the beginning of the 20th century. It’s believed that at one point this wild ruminant, North America’s largest land mammal, numbered about 168,000, with a range that stretched from northern Saskatchewan to the Yukon and Alaska.

In 1893, the hunting of wood bison was prohibited in Canada, and the beleaguered species began to recover. Almost 20 years later, rangers were hired to better enforce the hunting ban, and by the time Wood Buffalo National Park was created in Alberta and the Northwest Territories in 1922, the wood bison population had increased to around 1,500.

The species had another setback when tuberculosis and brucellosis were introduced into the park with several thousand plains bison, brought in from Wainwright, Alta., between 1925 and 1928. Those diseases trouble the Wood Buffalo herd to this day. Things were further complicated when the wood and plains species interbred, but the 1957 discovery of a healthy, isolated herd of about 200 wood bison in the park helped save the purity of the species. In 1978, the Committee on the Status of Endangered Wildlife in Canada listed the wood bison as endangered, and by 2000, a recovery plan had helped downgrade that status to threatened.

Today there are an estimated 10,000 wood bison in Canada, including free-range and captive herds. Wood Buffalo National Park is home to around half that number, including the largest free-roaming, self-regulating herd in the world. 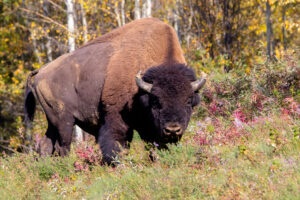 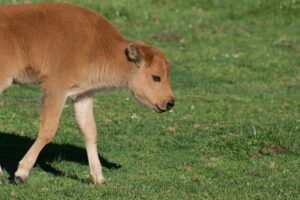 Plus: “bees of the sea” are pollinating underwater plants, snow geese are bouncing back hard, Greenland sharks are appearing in unlikely waters and birds are proving smarter than ever