Over the next few weeks, some three to five billion birds will begin their annual migration south from their nesting grounds in the boreal forest to their winter homes in southern Canada, the United States, the Caribbean and South America.

Some will fly nonstop for days over open ocean, dodging weather systems and riding prevailing winds to conserve energy. Others will stream by the thousands over international borders under cover of darkness, stopping to rest and feed in woodlands and wetlands during the day. All face a perilous journey that speaks to the resilience of nature, but a new report warns that migratory birds are facing increasing pressure from human-caused threats, and that international cooperation is needed to protect their habitats.

The report, Charting a Healthy Future for North America’s Birds, is co-authored by representatives of Ducks Unlimited, the Boreal Songbird Initiative, the Cornell Lab of Ornithology, Environment for the Americas and the University of Manitoba, and calls on the governments of Canada and the United States to strengthen conservation efforts, invest in bird research and empower indigenous people to be stewards of bird activity on their traditional lands.

Jeffrey Wells, science and policy director with the Boreal Songbird Initiative and one of the report’s authors, says while it was groundbreaking in its time, the Migratory Bird Treaty signed by Canada and the U.S. a century ago doesn’t address the challenges birds face today or accurately reflect what we now know about bird behaviour thanks to technological advancements.

“Back then, the biggest problem was unregulated hunting,” Wells says, noting the treaty was signed about two years after the passenger pigeon went extinct.

“Today’s problems are completely different; the birds are facing habitat loss and degradation as a result of everything from housing developments to agriculture, forestry, mining, roads, power lines, etc.”

Improvements in satellite and radar technology as well as wearable GPS tracking devices have allowed scientists to gain a better understanding of where birds go on their migratory journey. It was previously assumed that birds more or less stuck to a few predictable flyways and that therefore, as long as habitat was preserved along those corridors, bird populations would continue to flourish. However, Wells says the reality is that birds will roam over broad areas in search of food or to avoid bad weather, and their route may vary widely from migration to migration.

“It means we have to protect a vast amount of habitat across different areas, and that we have a shared stewardship responsibility,” Wells says. “We have to protect the birds’ nesting grounds in Canada, but also their overwintering grounds and the stopovers in between.”

Wells suggests bird conservation efforts must begin with North America’s “bird nursery”: the boreal forest. One of the largest and last intact forest areas on Earth, the boreal supports thousands of breeding bird species, yet the Boreal Songbird Initiative estimates that the footprint of natural resource extraction industries within the boreal region already encompasses an area of at least 730,000 square kilometers, largely from forestry, hydropower, mining, and oil and gas extraction.

The report recommends that Canada’s federal, provincial and territorial governments take action to protect at least 50 per cent of the boreal forest and incorporate it into a continental network of conservation areas that are free from industrial disturbance. The report further suggests that indigenous communities and governments should take the lead on land-use decisions within the boreal forest region of Canada and Alaska.

“We really want to see more and more governments at all levels raising the benchmark of protection, and along with that increasing efforts at managing land that’s used for industrial purposes,” Wells says. 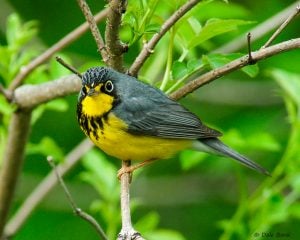