After working three summers on Halifax’s Harbour Hopper, Jeremy Tupper could probably give you a city tour in his sleep. Fortunately he won’t have to because there is a web app for that. And he made it.

When the city held its Apps4Halifax competition to showcase the release of a large amount of municipal data, the Dalhousie University computer science student fused his interests and came up with his prize-winning Historic HaliTour. It is a web-based application featuring some of the city’s historical locations plotted on a map.

This application, like so many recent web and mobile apps, was made possible by open data. It is a simple concept: public institutions that have been collecting data for their own internal use are making this information available online. Not only are vast amounts of information available to the public, but users are free to modify, repackage and redistribute it. It’s not a new idea, but one that has slowly caught on at various levels of government. Increasingly, municipalities throughout Canada are opening their troves of data. Even the federal government is getting on board.

“It’s usually raw data,” says Richard Akerman, a volunteer with Open Data Ottawa, a group that works with the municipality to promote open data. Available datasets can contain everything from locations of bike routes to real-time bus updates to incidents of reported crimes — information ripe for plotting on an interactive map or mobile app.

“All of that geographic data the city has, all of that information that it has for different reasons, the idea of open data is you share that in a public catalogue,” says Akerman. “Sometimes, it is just an Excel spreadsheet or it might be a text file. You need some application or some programming to go from that file to a map on the screen.”

The huge amount of data can be cumbersome in its raw form. That is where developers like Tupper come in. For his Historic HaliTour web app, he sifted through the recently released data from the Halifax Regional Municipality and found the building footprints of historic locations he wanted to highlight. He plugged the data he isolated into a system called Esri which gave him a base map of Halifax and outlines for creating a virtual tour.

“They provide some wicked templates to work with. I barely had to write any code at all,” says Tupper of the Esri technology. “That’s the beauty of it. You don’t really need to be a computer science student to do what I did.”

When the app was ready to go, Esri also allowed Tupper to host his website on their cloud.

But not all technologies are so straightforward. If you are just starting out, Akerman recommends you try your hand at making these types of website-based applications rather than “jumping into the deep end” of smart phone apps.

There are so many uses for the public data aimed at easing the hustle of private lives. Whether you are from London, Ont. and need a reminder of your garbage day, need to catch a bus in Vancouver, or are looking for the perfect dog park in Ottawa, there is probably some open data that can help you out. And odds are there is a map app for that. 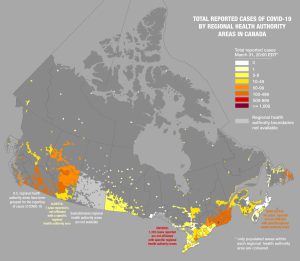