Inuit, injustice, and the trial that changed everything

In his new book, Thou Shalt Do No Murder, historian Kenn Harper explores how the killing of a trader in 1920 set off a clash of cultures in the Canadian High Arctic that still resonates today

Isolation, abandonment, greed, madness — oh, and a tussle over a woman.

Those themes alone suggest a compelling read, but set the story in Canada’s High Arctic nearly a century ago, a time of social upheaval as local Inuit and colonial powers struggled for sovereignty over the region, and you’ve got the makings of a truly fascinating tale that still resonates today.

Thou Shalt Do No Murder: Inuit, Injustice, and the Canadian Arctic, a new book by northern historian Kenn Harper available now from Nunavut Arctic College Media, tells the story of the show trial of an Inuit elder accused of murder in Pond Inlet in 1923, and the clash of cultures and concepts of justice it symbolized. Drawing on a rich combination of oral testimony, archival research, and his own experiences from 50 years of life in the Arctic, Harper reveals how the incident marked the end of the traditional way of life for the Inuit, and ushered in a new era of reluctant dependence on police, traders and a distant government in the south.

Coincidentally, Thou Shalt Do No Murder is not Harper’s only offering this fall. Minik, The New York Eskimo, also published this month by Steerforth Press, is a revised and updated version of Harper’s earlier book about Minik, one of six Polar Inuit who were taken from Greenland to New York City in 1897 as live “specimens” to be exhibited at the American Museum of Natural History. It’s an equally heart-wrenching story of betrayal, but also resilience in the face of unimaginable hardship.

In the excerpt below, from Thou Shalt Do No Murder, Harper sets the scene for the murder that changed everything.

With Jimmy Etuk, speech was volcanic. Words rumbled with increasing volume from a spot deep within his ample girth until they erupted with reverberations that filled my small living room. A full head of grey hair topped a weathered face marked by eyes that shone gently at the memories accumulated over seven decades. He had come to tell me stories, and had begun one that required him to abandon his usual levity, for this was a tale of events that changed forever the lives of his people, the Inuit.

“The Qallunaaq—the white man called Sakirmiaq—had been too long away from his own people,” he began. “His ship didn’t come. And the other white man, Kapitaikuluk, refused to take him south. We Inuit thought that shocking, that Kapitaikuluk would leave him near Pond Inlet, with no way at all to get back to the land of the white men, even after he had cried and begged for passage. I was just a boy and I had never known that white men could cry. My parents told me that Sakirmiaq seemed to really lose his mind after that. They said he had been a good man and they felt sorry for him, but now they were afraid of him at the same time. They were relieved when they heard, later that winter, that he was going south by dogsled.

“That’s how he ended up at Cape Crauford in the spring. And that’s where the Inuit killed him.”

Etuk reached for the rum bottle and poured another tot. His liking for the drink, he assured me, was hereditary, for his real father— not the Inuit man who had raised him—was a Scottish whaler. He prided himself on being able to understand the ways of the white men better than his countrymen in Arctic Bay did.

He continued the story that he had started so spontaneously.

“One of the men went to Sakirmiaq’s igloo and asked him to come outside. He told him some of the other Inuit had fox pelts to trade. The white man picked up his pipe—all the men and even some of the women smoked pipes in those days—and crouched low through the doorway of the snowhouse. It was getting late but it was spring and so it was still light. It was the time of year when people usually start to feel more cheerful, with the dark of winter behind them. But nobody was feeling happy in this camp because everyone was afraid. Outside, Sakirmiaq headed for Nuqallaq’s igloo. Nuqallaq could talk some English and used to help the white man when he wanted to buy from the Inuit. Then Nuqallaq appeared—he had been hiding—and shot him. The white man stumbled. His pipe fell from his mouth. He saw Nuqallaq but didn’t realize that that’s who had shot him, and he called to him for help. But Nuqallaq aimed and fired a second time. Sakirmiaq staggered, but still he didn’t go down. Then another man, Aatitaaq—you know his son, Oyukuluk—rushed up from behind and grabbed him and pushed him, and Sakirmiaq tripped over a sled and fell. He tried to get up but couldn’t. He was mumbling something in his own language. Other men had heard the shots and they came and stood around him. Nuqallaq was the leader and he was the only one carrying a gun. He looked down at Sakirmiaq and then he put the gun near the white man’s head and killed him.”

Etuk had told the story matter-of-factly, but the sparkle left his eyes and his conclusion resonated with sadness and regret. “That was the only time,” he said, “when my people ever killed a Qallunaaq. That’s why more white men came. That’s why they never left our land again.”

Excerpted from Thou Shalt Do No Murder: Inuit, Injustice, and the Canadian Arctic by Kenn Harper, published September 2017 by Nunavut Arctic College Media. Condensed and reproduced with permission from the publisher.
Advertisement
Inuit fur trade 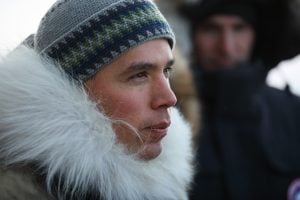