How did a small band of seafaring aboriginals secure to the rights to control land in a remote archipelago on the coast of British Columbia, where they had lived for millennia? A new book by Mark Dowie aims to answer that question. In The Haida Gwaii Lesson: A Strategic Playbook for Indigenous Sovereignty, the award-winning journalist explores the Haida people’s anthropological narrative, examining their half-decade-long campaign for aborginal title as well as the unique beauty and importance of the lands themselves.

Here is an excerpt from the book, which examines the geographical history of Haida Gwaii.

THERE IS something alluring about islands, each of them a small world unto itself. Remote and beckoning, they compel us to come ashore and stay awhile, explore their individuality, and contemplate life in the stream. Jam a hundred or so of them into a dense aquatic archipelago, and you have an irresistible magnet. The wild and lush islands of with their four thousand miles of shoreline punctuated by streams from eight hundred separate watersheds, are as alluring as any on Earth, particularly the smaller, isolated islets that have been given names like 2 The popular translation of Haida Gwaii is “Islands of the People.” But that name is derived from “Xaaydlaa Gwaayaay,” which translates literally from Xaayda Kil, the Haida language, as “Taken out of Concealment.” “Tuft,” “Flatrock,” “Monument,” and (my personal favorite) “All Alone Stone.”

When I first approached the eastern shoreline of the islands in the spring of 2015, I tried to imagine them being seen by humans for the first time. Were ancestors of the Haida as enthralled as I was, as drawn to their mossy intertidal flats, their impenetrable forests rising dramatically to the distant snowcapped San Cristobal Mountains? The place seemed so inviting, so pure and peaceful, until days later when I saw the islands from the other side.

Most of the western shoreline of Haida Gwaii lies at the edge of the continental shelf—an abrupt tectonic scarp rising from nine thousand feet below sea level to the three-thousand-foot peaks of the San Cristobals. The rocky and treacherous coastline is pounded day after day by waves as high as ninety feet, pushed shoreward by violent Pacific storms featuring winds up to one hundred miles an hour. There are few other places on the planet with shorelines as hostile to man and nature. Together, wave and wind toss huge boulders and massive driftwood timbers over tall bluffs, smashing them into spruce forests that have somehow survived centuries of bombardment.

About twenty million years ago, this 3,700-square-mile chunk of volcanic rock broke off from the North American mainland and drifted over countless millennia to the edge of the Pacific continental shelf, where it remains today, resting perilously along the converging Pacific and North American Plates. The islands sit directly over one of the planet’s most seismically active faults, known affectionately as “the Charlotte,” which produces a memorable earthquake every thirty years or so.

The last of twenty or so Pleistocene glaciations began its retreat from the archipelago around 16,000 BCE, about two thousand years earlier than the rest of the North American glacial masses. The retreat ended about thirteen thousand years ago, the same time that humans first appeared on the islands. Because of the way the place was covered with ice, Haida Gwaii is regarded by nature historians as a “partial refugium,” a refuge for plant and animal species that preexisted and survived the Ice Age—at least thirty-nine species, including rare or distinctive subspecies of the saw-whet owl, hairy woodpecker, Steller’s jay, and Peale’s peregrine falcon. Then there are the mammals, each unique in one way or another to Haida Gwaii, which claims its own strains of pine marten, river otter, Haida ermine, dusky shrew, silver-haired bat, Keen’s myotis, little brown bat, deer mouse, and Ursus americanus carlottae, the largest black bear in the world. All of these species have adapted characteristics so different from their mainland counterparts that they are now regarded by wildlife biologists as endemic to Haida Gwaii; they exist only there, in a unique tapestry of life so varied and fecund that biologists have dubbed the islands “the Galapagos of the North.” Add to those species a long list of strange plants and iridescent mosses found only on the archipelago, and you have a truly extraordinary setting—a visual, sonic stage so unique and bizarre in places that it could easily have been the set for Avatar.

Unfortunately, due to a century of heavy forestry inflicted on the islands by the government of British Columbia, the introduction of species like the Sitka black-tailed deer and the common raccoon, and the arrival of Norwegian rats on ships, several plants and animals are on the brink of extinction. Hunting and trapping have also taken their tolls. The Dawson caribou (Rangifer tarandus dawsoni), once unique to Haida Gwaii and a vital source of protein for its only predator, humans, vanished long ago. So too did the sea otter, whose pelts once adorned royalty on every continent. The otters are slowly returning, and there is talk of introducing a small caribou genetically similar to dawsoni, but eighty more local plants and animals remain officially listed as “threatened.”

It’s hard to wander about Haida Gwaii today, fighting your way through one of the densest rainforests in the world, an ecosystem that by weight supports more biomass than any other on the planet, and imagine it without a single tree anywhere in sight. But it was that way even as it was first settled by humans, who evolved so closely for four or five thousand years with primeval conifers like the monumental Sitka spruce and the red cedar that the trees are almost regarded as blood relatives by the Haida today. “An indulgent god could have provided nothing better,” Haida master carver and canoe maker Bill Reid remarked of the cedar, his favorite medium and the botanical fountainhead of his culture.

Between the islands and the mainland lies Hecate Strait, a shallow body of water averaging about fifty miles between shores. Appropriately named after the Greek goddess of witchcraft and sorcery, and renamed “the black bitch” by local sailors, the strait is one of the most treacherous bodies of water on Earth. A combination of shallow water, strong currents, and high winds can change a flat calm into roiling twenty-foot chop in a matter of minutes. There’s a lot of sea wreckage on its floor.

Before the Ice Age, a portion of the strait was exposed and a level grassy plain stretched at least halfway across it. In fact, it seems likely that at one point the islands may have briefly been accessible by foot from the mainland. Such a land bridge would explain the existence of black bears and other mainland species that couldn’t possibly have evolved on or swum to the islands. In small valleys on the submerged plain, robotic submarines have also found convincing evidence of man-made fish weirs dating back 13,700 years.

The warm Japanese current swirls north from the equator and turns a climate that should be barely habitable into something akin to Scotland’s, and which supports one of the most diverse marine ecosystems in the world. The constant upwelling of those nutrient-rich currents provides sustenance to one of the most productive wild fisheries on the planet, food stock not only for the human inhabitants of the islands, but also for the carnivorous salmon, huge colonies of seals and sea lions, over thirty species of whale, dolphins, porpoises, and millions of fish-eating birds. The diversity of intertidal life around the islands draws marine biologists from every university in the world. And that’s just the shoreline.

Inland, there are more endemic and disjunct species than have been found just about anywhere else on Earth… certainly more than the Galapagos. Birders will find a quarter million breeding pairs of seabirds and the world’s largest concentration of Peale’s peregrine falcons. Trumpeter swans and sandhill cranes take refuge in company with tufted puffins, Cassin’s auklets, ancient murrelets, and Leach’s storm petrels, all of them prey to the largest bald eagle concentration on the west coast.

Place is a factor in all struggles for human sovereignty, and a landmass bordered on all sides by water is a huge advantage for any peoples claiming title. The boundary is obvious and incontestable. And it’s unlikely that, before “discovery” and/or “conquest,” more than one community of people ever lived there. Geography provided one of the Haida’s great advantages in their struggle for independence: their land has been theirs forever. Their claim, therefore, seems clear to them.

Excerpt from The Haida Gwaii Lesson: A Strategic Playbook For Indigenous Sovereignty, courtesy of Inkshares
Advertisement 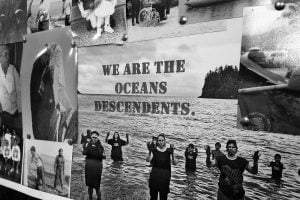