Extensive snow and ice cover, large areas of permafrost and icebergs shaped into incredible forms. These are the hallmarks of the Arctic landscape — but for how long? The northernmost region on Earth, the Arctic is often characterized by vast expanses of frozen land with a climate heavily influenced by sea currents. Because of these unique characteristics, the Arctic is an important region in assisting with our understanding of the Earth’s changing climate. And it’s changing…

Now, typhoons, smoke from wildfires and increased rainfall are some of the several climate-driven phenomena that are altering our perception of how we “think” the Arctic should appear, according to this year’s Arctic Report Card. Since 2006, the National Oceanic and Atmospheric Administration has issued this annual report that pulls together peer-reviewed, reliable and concise environmental information, analyzing various components of the Arctic’s current environment system relative to historical records.

The dramatic environmental changes felt by Arctic Indigenous Peoples were also included in this year’s report, with the 15th chapter being authored by a team including Ahtna Dine’ Storyteller Wilson Justin of the Althsetnay Headwaters People Clan. This chapter describes how warming air temperatures, shorter periods of snow cover, changes in animal migration patterns and increased wildfires are only some issues affecting the economic well-being, health, cultural traditions and other vital aspects of life for Arctic Indigenous Peoples. In the report’s 17-year history, this will be the most comprehensive chapter discussing how these changes affect Indigenous communities and what is being done to address these changes.

Divided into three sections: Vital Signs, Indicators, and Frostbites, the report covers all aspects of change, from new and emerging issues to updates on key topics. With the knowledge of 147 experts from 11 countries, the report card comprehensively depicts how climate change is reshaping what was once a reliably icy expanse but is now Earth’s fastest-changing region. Below are some of the main highlights included in the 2022 Arctic Report Card.

Warming faster than any other part of the world, the Arctic is experiencing increased surface air temperatures with its sixth warmest year since 1900. Ecosystems are very sensitive to surface air temperatures, making it a key indicator of climate change. In the winter (January to March), above-normal temperatures (more than or equal to 3C) were recorded in the Eurasian Arctic and Arctic Ocean regions, contrasting with below-normal air temperatures (more than or equal to 2C) over areas in the North. A large area of low pressure was also observed across the Arctic, with low pressure supporting warmer Eurasian and Arctic Ocean winter temperatures in the eastern Arctic. This means these areas experienced a relatively thin atmosphere which can produce more clouds and, therefore, rain. Also, the Beaufort Sea and Canadian Archipelago experienced warm summer temperatures due to low pressure across the Alaska Arctic and northern Canada. Collectively, the last seven years are the warmest on record.

Covering nearly 80 per cent of the surface of Greenland (1,710,000 square kilometres), the Greenland ice sheet is the largest ice mass in the northern hemisphere. As a result of the ice sheet’s positioning in the Arctic, it is highly susceptible to climate change and is therefore subject to regional intensification of warming. Between Sept. 1, 2022, through mid-August 2022, the Greenland ice sheet experienced a total mass change (a loss of 146 ± 64 gigatonnes) equivalent to a ~0.4-millimetre sea level rise. This represents the 25th consecutive year of ice loss. This increased ice melt contributes to sea level rise and affects the frozen microbial rainforest of life within the ice. The consequences of melting ice impact coastal erosion and increase the chance of floods, inundating saltwater ecosystems with fresh water. As ice is lost, salty ocean water is flooded with freshwater, causing an imbalance for many ocean habitats. Although cold temperatures delayed summer ice loss, the ice sheet still experienced a great melt during 2022.

Between October 2021 and September 2022, wetter-than-normal conditions were experienced throughout the Arctic, making this period the third wettest in the past 72 years. Since the 1950s, Arctic precipitation has increased significantly and is detectable across seasons and datasets. The effects of increased rainfall in the Arctic will affect land and ocean ecosystems in several ways, from reducing the alkalinity of Arctic surface waters to causing larval insects to emerge earlier due to warmer water. Environmental events such as typhoons are also fuelled by warm water, including Typhoon Merbok, which dramatically shaped 2022 in the Bering Sea region by bringing seas of up to 16 metres toward Alaska. In mid-September 2022, this typhoon hit the west coast of Alaska, fuelled by warmer-than-normal water temperatures. Throughout the North Atlantic subarctic, significant increases in heavy precipitation events are detectable, while areas of the central Arctic display increases in consecutive wet days and decreases in consecutive dry days. Increased rainfall in the Arctic can make rivers and waters murkier, blocking light for photosynthesis and even potentially harming animals like sharks and some whales by clogging filters needed by certain species to survive.

While sea ice decreases, maritime ship traffic escalates. The most significant increases occur among ships travelling from the Pacific Ocean through the Bering Strait and Beaufort Sea. Between Sept. 1, 2009, and Dec. 31. 2018, satellite-based records show an increase in maritime ship traffic which also comes with an increase in noise pollution within Arctic waters. With shipping traffic projected to continue to increase, noise levels are exacerbated, affecting species like belugas which rely on sound to communicate, find food and navigate their underwater world.

The Arctic tundra biome is a crucial area where vegetation and underlying permafrost soils are heavily influenced by warming air temperatures and the rapid decline of sea ice, making it a “hotspot” of global environmental change. The vegetation taking over grasslands and tundra, including plants, shrubs and trees, is called “tundra greening.” In 2022, tundra greenness was high in most of the North American Arctic — in contrast to northeastern Siberia, which was unusually low. Satellite data, which is used to measure “greenness,” indicates tundra greenness declined from the record high values of the past two years but was still the fourth highest since 2000. According to the report, disturbances such as wildfires and extreme weather events have become more frequent due to the inconsistency of tundra greenness which is less available as a result of wildfires removing vegetation. Other ecological disturbances that can remove vegetation include permafrost thaw and pest outbreaks.

Despite the prevalent outbreak of the highly pathogenic avian influenza, the population size of Arctic geese remained high with continuously stable or above historical levels. As essential indicators of environmental change, Arctic geese act as critical indicators of environmental changes as they are keystone herbivores and one of the first bird species to return to northern regions in the spring. Some species even have the potential to alter ecosystem processes if populations become overabundant.

Unlike the increased numbers of Arctic geese, seabirds experienced yet another year of mass bird deaths. Since 2017, communities living on the coasts of the northern Bering and southern Chukchi seas have discovered a substantial number of bird carcasses, including ducks, puffins, shearwaters and auklets. This year will have been the sixth consecutive year with higher-than-expected beach-cast seabirds, which was considered a very rare phenomenon until 2015. Carcasses were also reported along Alaskan beaches, and although reports were ~450 carcasses fewer from previous years, this remains a concern for coastal communities — and the ecosystem at large. 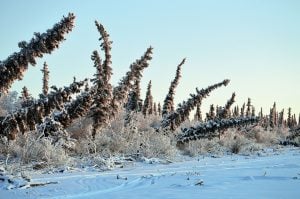 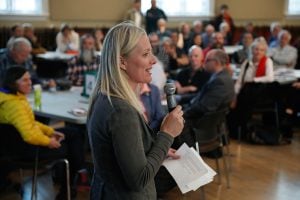