Fires are burning in the Amazon rainforest. Here’s what you need to know

Fire activity in the Brazilian Amazon surged this week; here are some key things to know about the situation

The world’s attention suddenly turned to Brazil this week as international media reported an unusually high number of fires burning in the Amazon rainforest. As of Thursday, Brazil’s National Institute for Space Research, which monitors fire activity across the entire Amazon, had recorded 76,720 fires this year in Brazil alone, an 85 per cent increase over the 2018 fire season.

The news has provoked strong reaction from the international community, with politicians, celebrities and activists rallying on social media around hashtags such #PrayforAmazonia and #ActfortheAmazon. But as concern has spread, so has misinformation, including photos from other significant fire events that are being attributed to the current situation in Brazil. The situation in the Amazon is complex and changing quickly, so here are some facts and figures to help put the story in context.

How serious a problem are the Amazon fires?

Regular readers of Canadian Geographic likely know that the Amazon is hugely important. Spanning some 5.5 million square kilometres in nine South American nations, it is the world’s largest and most biodiverse tropical rainforest. For comparison, Canada’s largest forest biome, the boreal, covers some 2.7 million square kilometres — more than half our country’s landmass.

Forests store carbon dioxide from the atmosphere and release oxygen, making their preservation and restoration a crucial part of efforts to slow the pace of climate change and otherwise ensure that our air is clean and breathable. When forests burn, all that stored carbon dioxide — plus other greenhouse gases such as methane and nitrous oxide — pours into the atmosphere, and large fires can actually have a significant impact on carbon output. For example, the 2016 fire that forced the evacuation of Fort McMurray, Alta., may have released enough carbon to account for 10 per cent of Canada’s total emissions that year.

All of that is why French president Emmanuel Macron struck a chord when he tweeted Thursday that “Our house is burning” and urged world leaders to address the crisis at this weekend’s G7 summit in Biarritz, France.

Our house is burning. Literally. The Amazon rain forest – the lungs which produces 20% of our planet’s oxygen – is on fire. It is an international crisis. Members of the G7 Summit, let’s discuss this emergency first order in two days! #ActForTheAmazon pic.twitter.com/dogOJj9big

Are fires normal in the Amazon?

Fires happen annually in the Amazon, especially during the dry season from March to November, but unlike the boreal, fire is not a natural part of the life cycle of the rainforest. In fact, throughout most of its history, the Amazon was relatively fire-resistant thanks to its natural humidity, according to the North American Atmospheric and Oceanic Association. Deforestation and prolonged periods of drought due to climate change have made the rainforest more vulnerable to fire. Most of the current fires were set deliberately by farmers and loggers clearing land.

If fires are burning all over the Amazon, why is everyone mad at Brazil?

Of the nine countries that share the Amazon, Brazil has both the largest share and the greatest number of fires recorded so far in 2019 — Venezuela is a distant second with 26,495 fires. The country’s new president, Jair Bolsonaro, is a controversial figure who campaigned on a promise to open up more of the forest to commercial development and who has failed to enforce environmental regulations meant to slow the deforestation of the Amazon. Last month, the New York Times reported that since Bolsonaro took office in January, Brazil’s portion of the Amazon has lost more than 340,000 hectares of forest cover. For his part, Bolsonaro has called the fires an “internal matter” and has even suggested that non-governmental organizations are setting fires deliberately in an attempt to hurt his reputation.

What is Canada’s response to the fires?

It remains to be seen what, if anything, Canada will do about the situation in Brazil, but Prime Minister Justin Trudeau tweeted in agreement with French president Macron that the environment needs to be at the top of the agenda for this weekend’s G7.

I couldn’t agree more, @EmmanuelMacron. We did lots of work to protect the environment at the #G7 last year in Charlevoix, & we need to continue this weekend. We need to #ActForTheAmazon & act for our planet — our kids & grandkids are counting on us. https://t.co/KwaR8Eevq5

The Canadian government has been pushing hard in recent weeks to achieve its goal of protecting 17 per cent of Canada’s terrestrial areas and 10 per cent of marine and coastal areas by 2020 as part of an overall environmental strategy. On Wednesday, Parks Canada, the government of the Northwest Territories and First Nations stakeholders finalized the creation of Thaidene Nëné National Park Reserve northeast of Yellowknife, and earlier this month, Trudeau announced plans to protect two key marine areas in the High Arctic. 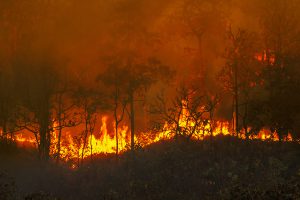