Bioethicist and conservationist Kerry Bowman on the 2020 Amazonian forest fires — as bad, or worse than 2019's — and why Canadians should be very concerned
By Kerry Bowman
Advertisement

I remember the alarm I felt last year, waking up in a deeply remote forest in the western Amazon to the smell of smoke. The only people who might have been anywhere nearby were the “uncontacted” Indigenous people known to the region. But the uncontacted aren’t known to ignite the forest, and Amazon fires are usually much farther east. Could the rainforest really be burning?

Over the past eight years, I have participated in expeditions to isolated regions of the western Amazon around the tri-national borders of Peru, Columbia and Brazil, documenting the relationship between protected Indigenous territories and biodiversity preservation. I have talked to a multitude of people in these areas, including “non-isolated” Indigenous people, Amazon settlers, military personnel, miners and loggers, and even drug traffickers.

Although perspectives are as diverse as the people, virtually everyone wants to see the rainforest protected, yet they feel caught up in forces larger than they have the power to affect. Personal motives to feed families and protect livelihoods balance uneasily with complex, international geopolitical drivers tied to trade politics and food chains. With courage and insight, Amazonian nations have protected large tracts of land as Indigenous territory. Yet in recent years, there has been tremendous pressure from cattle ranchers, loggers, the oil and gas industry, and dangerous incursions by cartels, all of which have a vested interest in clearing sections of the rainforest.

With the onset of the 2019 fire season, things took an even more difficult turn. The extent of the fires was staggering — the piercingly green carpet of rainforest was dotted by thick tufts of smoke as far as the eye could see. Brazil’s political decision to not enforce existing laws created a huge escalation in intentionally caused fires.

The forest fires of 2019 were unprecedented in the scope of their destruction, yet fortunately they received considerable international media attention. In 2020, things are no better, and may in fact be worse. Not only has international attention waned, but according to a report by the Associated Press, the fires burning the western Amazon “increased 28 per cent in July” compared to the 2019 fire season. In fact, AP goes on to report that the Brazilian military, which has been tasked with preventing forest fires, is abetting the blaze by permitting the clearing of roads.

The relative decline in attention is alarming because the Amazon’s vibrant and complex ecosystem provides essential services to all life on Earth. It helps balance the carbon budget and plays a key role in the global water cycle, stabilizing climate dynamics locally, and around the world. In addition, the Amazon releases water vapor into the atmosphere through the process of evapotranspiration, which recycles and transports rainfall across South America and other regions. For this reason, the Amazon rainforest is so thoroughly hydrated that natural fires do not normally occur; virtually all large Amazon fires are man-made.

Many researchers predict that the Amazon is reaching a tipping point, beyond which it will gradually transform into a semi-arid savannah. If the deforestation of the rainforest continues past a threshold of 20 to 40 per cent total deforestation, multiple feedback loops will spark the “desertification” of the Amazon basin. As of 2019, an estimated 17 to 20 per cent of the Amazon’s forest cover has been clear-cut or burned, a proportion that has been rising every year.

As the warming climate exacerbates the desiccation of the Amazon, the destabilized rainforest in turn is exacerbating global warming. As the rainforest bleeds biomass through deforestation, it not only loses its ability to capture carbon from the atmosphere, but also releases carbon through combustion. If the annual fires burning the Amazon are not curtailed, one of the world’s largest carbon sinks will progressively devolve into a carbon faucet, releasing more carbon dioxide than it sequesters. Although the exact point at which this catastrophic cascade will commence is not known, we must not discover where the tipping point is by crossing it.

Clearly, a large part of what makes 2020 unusual is the global pandemic and the related economic and public health emergencies. But a growing body of research, including a prominent article in Nature, suggests that another pandemic could arise from the Amazon or other forest regions if the burning of rainforest continues. Zoonotic diseases, those coming from animals to humans, are on the rise. As roads are built through the Amazon, and forests are cleared for timber production and agriculture, a “checkerboard” of tropical forest edges is created. This checkerboard increases the potential points of contact between humans and wildlife, which in turn increases the likelihood of viral transmission and the emergence of novel human diseases.

Furthermore, these activities result in rapid extinctions and a severe loss of species richness. Currently, the Amazon is home to an astounding amount of biodiversity, which provides a “dilution effect,” whereby higher levels of biodiversity in a region are associated with a lower prevalence and spread of pathogens. The continued scorching of the Amazon will have consequences that are complex, far-reaching and unimaginably dire. The degradation of the rainforest erodes its biodiversity shield, and could catalyse the emergence of the next pandemic. In a world reeling from the impact of COVID-19, the importance of protecting the rainforest and its biodiversity is evident.

The western Amazon is home to the highest concentration of uncontacted people on Earth. Almost all the lands where uncontacted people roam were, until recently, fully protected. The Indigenous People of the Amazon are among the hardest hit populations by COVID-19. This can be attributed to Indigenous people’s relative lack of political protection and access to adequate healthcare and living conditions, which has profound human rights and environmental implications. In fact, many Indigenous groups are on their own when it comes to fighting fires due to Brazilian government cutbacks. Furthermore, some researchers suggest that isolated indigenous groups are forced to become more nomadic during fires, elevating their risk for smoke inhalation and exposure to COVID-19.

Despite the severity of the global pandemic, it is important we keep in mind that the environmental crisis we are facing is a far greater threat to ecological health and human well-being. The degradation of the Amazon has profound consequences, so concerted global attention and action is both a practical and ethical obligation. We must all stand together for the protection of Indigenous territories as a matter of human rights as well as the well-being of all living things. Although Canada has limited direct trade in Amazonian beef or wood, we contribute to patterns of global consumption, which influence trade and political priorities. Interventions are complex, but include the protection of Indigenous territories, the restoration of already degraded lands, and, most importantly, continued international awareness of political dynamics and consumer choices. Political engagement of individuals and governments is of critical importance. 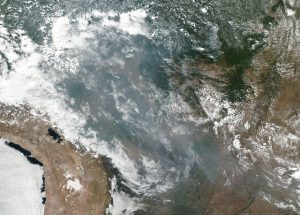 Fires are burning in the Amazon rainforest. Here’s what you need to know

Fire activity in the Brazilian Amazon surged this week; here are some key things to know about the situation