As far as years of my life go, 1998 was a particularly good one. I published my first best-selling book, Journey to the Source of the Nile, was thus invited to speak at many literary festivals as well as various museums around the world, including the British Museum in London – a great honour. It was November and the house was packed with 400 people. Among the many celebrities in attendance was the world’s best-known natural history presenter: David Attenborough.

I started my speech with two carousels containing 120 dramatic colour slides about my journey to the Nile. Things were going well – and did so for the next thirty minutes when the first carousel of sixty slides ended.  The efficient projectionist had been well-rehearsed to change to the second carousel with no time delay ahead of the second half of my lecture.  But then the worst possible thing happened.  There was a long pause – and then an even longer one.  The carousel was not changed and the promised slides did not appear.  Finally the embarrassed projectionist came down from his projection room and on to the stage to explain that the second carousel had jammed in the projector and that by trying to force it out the sixty remaining slides were strewn over the projection room floor.  It was a lecturer’s worst nightmare and I had to excuse myself from my audience to try to re-organise the slides into their proper order.  This would take some time and I had to leave the lecture theatre for an embarrassing silent ten or fifteen minutes.

Luckily for me, Attenborough realized the awkward problem, immediately bounded onto the stage and after explaining the technical disaster to the audience, entertained the crowd with his own personal stories and embarrassing moments.

It did not take me long in the projection room to realise that it was impossible to put my slides in anything close to the proper order.  It would take a good half hour or more.  So I returned to the stage and gave the second half of my lecture without slides.  Thankfully my story could stand on its own merit and I completed my lecture successfully.  But David Attenborough had saved my evening and we had a relaxed and very pleasant dinner together with some excellent wine.  Thanks to him, the event had been a resounding success.

Attenborough was born in Isleworth, West London, but spent his early life on the campus of University College, Leicester, where his father was principal.  Even at a very young age he collected fossils and other natural specimens.  He was educated at Wyggeston Grammar School in Leicester and won a scholarship to Clare College, Cambridge in 1945 where he received a degree in natural sciences.  In 1947 he spent two years doing his national service in the Royal Navy and in 1950 married Jane Elizabeth Ebsworth Oriel.  She died in 1997.  They had two children, Robert and Susan.

After Attenborough left the Navy he edited children’s science textbooks but left disillusioned, and in 1950 applied for a radio production job with the BBC.  He was rejected.  However the head of BBC broadcasting suggested  that Attenborough take a three-month training course, which he did, and in 1952 the BBC hired him full time.  He worked for the “Talks” production department and his early projects included the quiz show Animal, Vegetable, Mineral? and Zoo Quest in 1954.  The BBC Natural History Unit was formed in 1957 in Bristol but Attenborough refused to move there, preferring instead to form his own Travel and Exploration Unit in London, which allowed him to produce documentaries for them including the Travellers Tales and Adventure series.

Attenborough resigned from the BBC in the early 1960s to study for a postgraduate degree in social anthropology at the London School of Economics, but he agreed to return to BBC Two when it was launched in 1964, as the controller.  The TV channel was having serious problems but Attenborough quickly changed the broadcaster’s schedule, establishing a portfolio of programmes including music, the arts, archaeology, travel, sport and natural history.  He completely transformed the station and it became the first British channel to broadcast in colour.  One of his most important decisions was to commission Kenneth Clark to host and narrate the 13-part series Civilisation. It was broadcast in 1969 to universal acclaim and became the blueprint for other documentaries on history and western art. This was followed by his ambitious Life on Earth project which he wanted to present himself. 1969 was also the year that Attenborough was made responsible for the programmes of both BBC 1 and BBC 2.

Three years later it was suggested that he allow his name to be put forward for the post as Director-General of the BBC.  He feared the job would restrict his creative output – so he resigned and became an independent broadcaster.  Eastwards with Attenborough was his first production, after which he started work on Life on Earth co-produced by the BBC and Turner Broadcasting in the US, which was broadcast in 1979.  It broke new ground in wildlife filmmaking, and established the quality of the BBC’s natural history output.  He also achieved his ambition to be the on-screen presenter.  The series was an incredible success and spawned The Living Planet series – another critical and commercial success.  In 1990 The Trials of Life completed his trilogy.

“The growth in human numbers is frightening.  I’ve seen wildlife under mounting human pressure all over the world, and it’s not just from human economy or technology.  Behind every threat is the frightening explosion in human numbers.  I’ve never seen a problem that wouldn’t be easier to solve with fewer people – or harder, and ultimately impossible, with more.”

There followed a series of Life documentaries in the 1990s including The Life of Plants (1995), The Life of Birds (1998), The Life of Mammals (2002), and Life in the Undergrowth (2005).  Life in Cold Blood was broadcast in 2008 and completed his encyclopaedic series titled Life on Land.  When this last documentary was shown Attenborough was quoted as saying: “If you’d asked me twenty years ago whether we’d be attempting such a mammoth task I’d have said ‘Don’t be ridiculous!’ … if people watch it in 50 years time, it will still have something to say about the world we live in.”

Attenborough continued to collaborate with BBC Natural History.  The Blue Planet was presented in 2001, and Planet Earth in 2006 – the most ambitious of all his projects.  On February 22, 2016 the BBC announced Planet Earth II – the sequel to the 2006 television series – with Attenborough again, as presenter.  It has just been released to more acclaim.  Now, ninety years old, David Attenborough has not slowed down, and has received international recognition for his contribution to broadcasting.  He has 32 honorary degrees from British universities, received a Knighthood in 1985, and was made a Companion of Honour (CH) for services to nature broadcasting in 1996.  He is now an Honorary Fellow of Clare College in Cambridge and has been the subject of a number of BBC television programmes which focus on his time at the British Broadcasting Corporation.  Without a doubt he is the most respected wildlife presenter the broadcasting world has ever known, and has the distinction of having at least 15 newly discovered species and fossils named in his honour.

I cannot think of anyone else on earth who I would rather have chosen to fill in for me when my Nile speech was so brutally interrupted on that warm November evening in 1998 at the British Museum. 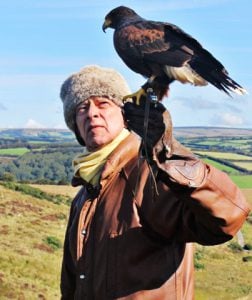