Tracing the history of the United Nations with a map, produced for schools in 1947 to commemorate the momentous coming together of the planet for a greater good

“We the peoples of the United Nations determined to save succeeding generations from the scourge of war … to reaffirm faith in fundamental human rights, in the dignity and worth of the human person, in the equal rights of men and women and of nations large and small.”

—excerpt from the Preamble to the Charter of the United Nations, 1945

The United Nations officially came into existence on October 24, 1945, in response to the Second World War, a devastating conflict that left an estimated 70 million civilians and soldiers dead, saw a genocide that claimed the lives of six million Jews and displaced millions more, and blew European empires to pieces — decimating much of the continent to a pile of smoldering rubble.

The term “United Nations” was first coined by American President Franklin D. Roosevelt in the weeks following the 1941 Japanese attack on Pearl Harbor, which thrust the United States into the war. On New Year’s Day 1942, Roosevelt, along with British Prime Minister Winston Churchill, Maxim Litvinov of the USSR and T.V. Soong of China signed the United Nations Declaration, pledging to use their countries’ full resources to defeat Hitlerism and Axis powers and ensure “life, liberty, independence, and religious freedom, and to preserve the rights of man and justice.” Representatives from 22 other nations, including Canada, added their signatures the next day.

By the spring of 1945, the end of the war was well in sight. Allied forces had invaded Germany, choking the movement of Axis troops. Hitler committed suicide in his underground bunker in Berlin on April 30, and Germany surrendered in Reims, France, on May 7.

During this time, the Charter of the United Nations was being developed to establish a new international peacekeeping organization built on the framework of its First World War precursor, the League of Nations, and to protect against another devastating world conflict. On June 26, 1945, delegates from 50 nations, representing about 80 per cent of the world’s population, filed one by one into the San Francisco War Memorial’s Veterans Building auditorium to sign the charter. The United Nations charter officially came into force on October 24, 1945.

This map, produced for schools in 1947, depicts the 55 member states of the United Nations as of 1946 and commemorates the momentous coming together of the planet for a greater good. It includes major events and quotes from great historical works and figures (from the Bible to Abraham Lincoln), and Canada’s own coastlines are marked with two of history’s many attempts to find the Northwest Passage.

Today, the United Nations has grown to 193 member states representing more than 98 per cent of the world’s population, while Canada has firmly planted itself as a leader in peacekeeping and diplomacy. The country’s intrinsic ties to the United Nations are no more apparent than in its very own 1982 Charter of Rights and Freedoms, a powerful part of Canada’s national identity, inspired by the United Nations’ own guiding principles.

*With files from Erika Reinhardt, archivist, Library and Archives Canada

Canadian Geographic commemorates 2020 is a series of articles, funded by the Government of Canada, celebrating milestone anniversaries of significance to the country’s history. See more stories in the series.
United Nations un map historical map Library and Archives Canada LAC 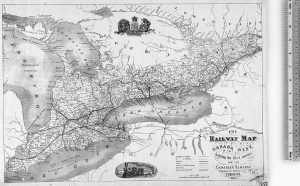 Early maps of the railways that shaped our country