As conservationists sound the alarm about the disappearance of North American birds, a new campaign is asking cat owners to step up and do their part to protect our feathered friends.

The Cats and Birds campaign, an initiative led by Nature Canada, asks cat owners to pledge to take steps to prevent their cats from preying on birds, such as only allowing them outside under supervision — or just keeping them indoors.

Eleanor Fast, Executive Director of Nature Canada, says studies have found that free-roaming cats kill more birds in a year than all other human activities combined, including window and vehicle collisions.

“Cat predation is such a huge factor in bird mortality, and there’s a lot of evidence that our birds are in peril, so we felt it was important to act now,” she says.

But lest cat owners feel their pets are being unfairly targeted, Fast says the campaign is as much about keeping felines safe as it is about protecting birds. Free-roaming cats are more vulnerable to disease, parasites such as fleas and ticks, attacks by other animals, and vehicle collisions. In 2012 alone, more than 1,300 dead cats were retrieved from the streets of Toronto.

“We love birds, but we love cats as well,” Fast says. “We really want to change the way people think of cat ownership so that when we see a cat roaming freely outside, we react with the same concern as if it were a dog.”

Some healthy alternatives to letting your cat roam freely outdoors include:

Fast says the next phase of the campaign will focus on the role of municipalities in protecting cats and birds, while the final phase will involve working with partners to address the problem of feral cat overpopulation in Canadian cities. 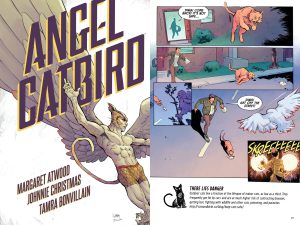 The celebrated Canadian novelist's first foray into comics is for the birds. But also the cats.