Why Jill Heinerth is diving beneath Bell Island, Newfoundland

"Bell Islanders are a picture of what it means to be Canadian," says the underwater diver and RCGS Explorer-in-Residence
By Jill Heinerth
Advertisement

People have often asked me why we explore places like the mine on Bell Island, Newfoundland. The project was named Expedition of the Year by The Royal Canadian Geographical Society, but it is not honor and glory that compels us to explore. For me it was totally personal.

In 2013, my husband Robert McClellan and I bicycled across Canada sharing my film We Are Water in efforts to spread water literacy. When we neared the end of our ride, I phoned Rick Stanley who owned Ocean Quest Adventure Resort in Conception Bay South. Could we complete our ride at his business and home? Could he extend us the generosity of a warm bed at the end of a three month journey. Rick opened his arms wide, helped us arrange more outreach opportunities to tell our story of water conservation and introduced us to Newfoundland at the same time. It was the one corner of my country I knew very little about.

I did not know Rick Stanley, other than by reputation, prior to that phone call. But as with most Newfoundlanders, he practically gave us the shirt off his back and welcomed us in to a wonderful new family. Rick put us in his Zodiac boat and drove us to Bell Island. He showed us the war memorial and told the story of the shipwrecks sunk by Uboats in the nearby harbor. He took us to the mine and described the economic hardships that the islanders had faced. He was a proud, strong and affable character whose personal convictions could not help but sweep you off your feet.

I knew I needed to give back. The people of Newfoundland welcomed me into their homes and lives and now I want to share their story with others and give them more tools to develop their local economy. Fifteen thousand people resided on Bell Island when the mine was fully operational. Three thousand strong souls remain today. Bell Islanders are a picture of what it means to be Canadian. When the mine closed, they struggled on. When the cod fishery collapsed, they helped each other prevail. Each time the economy fails this corner of our nation, they prove what being good neighbors is all about.

I was recently contacted by a man named Paul. He wanted to gift a photo to his mother-in-law Carol, daughter of Harold Bickford who toiled in the mine. Did I have a suitable photo I could share with them that could help her remember her Dad and connect with his sense of place? Carol shared her new picture that is now proudly hung on the wall of her home. It gave me goosebumps. If we can help connect more people with their sense of place and share this gem with more Canadians and the world, then our mission is accomplished. 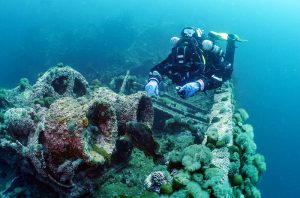 Photos from beneath Bell Island, Newfoundland 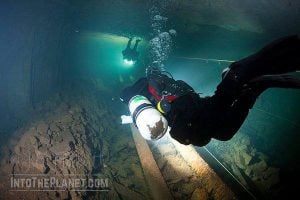