Canada isn’t generally considered a hotbed of historic battles, but we did have a brief and bloody scuffle with the Americans 200 years ago, as most readers and attentive high school students will know, and the musket smoke billowed highest in southern Ontario’s Niagara region, nowadays favoured by tourists for the legendary falls and its wine-country tours.

In the early 19th century, the Niagara River was a key route for trade, connecting Lake Ontario to Lake Erie. As a result, forts were built at both ends of the river, and a great deal of wild-aimed shooting ensued between June 18, 1812, and Christmas Eve, 1814. Roughly 20,000 soldiers died in Niagara and elsewhere before the American aggressors, who had been riding high on their recent revolutionary triumph, essentially said “my bad” and retreated to the other side of the border. Commerce and tourism promptly resumed.

This summer, in that same spirit of commerce and tourism, the Niagara region will dust off many key battle sites for its War of 1812 bicentennial celebrations. Fans of military history can make a fine weekend out of touring the circuit, as I did last summer with my 11-year-old son Geoffrey. We drove from Toronto on a sunny June morning two centuries after the bloodshed and began at the gates of Fort Erie, at the south end of the swift-moving river.

Fort Erie played host to the bloodiest hand-to-hand combat of the war, but today there is little sense of menace. The tranquil fort is most likely to be invaded by teenagers in search of a place to drink beer after dark. A violent past is difficult to conjure, although Niagara’s enthusiastic young guides do their best. What comes across more strikingly when you tour the battle sites is the degree of collaboration between what would become Canada’s three founding nationalities: the British, the French and First Nations. The war was a multi-ethnic effort, and so the country remains.

Four soldiers costumed as an American, a British redcoat, a Mohawk warrior and a French Canadian demonstrate a round of musket shot while new-Canadian tourists from South Asia and China watch curiously from a few metres away, bunched against the high outer wall of the fort. It’s so ear-piercingly loud that my surprised son claps at his ears. One can’t begin to imagine the gory experience of being here with thousands of men shooting.

Easier to grasp are the details of daily life, carefully reconstructed at the fort. In the senior officer’s bedroom, for instance, the guide explains that the ropes underlying the bed were the source of the expression “sleep tight.” I love those kinds of small revelations. She also points out that the reason American West Point cadets wear their famous grey uniform is because during the War of 1812, the Americans declared war on their blue-ink supplier.

After poking through the barracks and kitchens, my son and I enjoy a picnic lunch along the riverbank and talk about musket balls.

“Well, musket balls are like chunks of iron coming at you at 100 miles an hour and ripping out your bones.”

From Fort Erie, it’s a half-hour drive to Niagara Falls’ main drag, Lundy’s Lane, site of a six-hour battle notable mainly for the fact that nobody could see who they were shooting at through the smoke. Here we visit the Battle Ground Hotel Museum, constructed two decades after the war to cater to “battlefield tourism,” according to City of Niagara Falls Museums manager Clark Bernat, who takes us through the restored rooms. “Veterans of the war became the first tour guides,” Bernat explains, “and said that the British won or the Americans won, depending on where the tourist was from.” By the 1850s, there were five observatory towers on Lundy’s Lane and three competing hotels serving up pigeon pie and ale to visitors, who came to dig for souvenirs.

It was this kind of cheerful entrepreneurialism around the war that led to Laura Secord finding new fame as a brand of chocolate. Secord’s newly refurbished homestead in Queenston, Ont., is our next destination. For those who only know her as a brand of confection, Secord was a crazy-tough pioneer woman on the Niagara peninsula who raised seven children, ran a general store and altered the course of Canada’s only home-turf war without losing her muslin bonnet. We learn all about her from a young tour guide in ringlets and period dress, who describes how Secord walked through the region’s marshy, mosquitoridden interior and up and down the limestone ridges of the Niagara Escarpment to warn of an impending American attack.

The homestead has a nice recreation of the bedroom where five of Secord’s children would have slept, two or three to a bed, next to a child-size commode chair. There were no closets, because King George taxed everything that might be considered a room; closets, with three walls and a door, fit the bill.

The kitchen has a variety of period appliances and lamps, from whale oil (the most expensive) to bull rush (free). Bad teeth and white muslin dresses were signs of wealth, for such people could afford to eat their cake and spill it too. The homestead features a small blue cone of sugar placed in a window, the way the status-conscious might park a Jaguar in the modern driveway. One hundred pounds of sugar was equivalent in price to a house.

After leaving Secord’s homestead — without chocolates — we climb the hill above the village to reach Brock’s Monument, originally built in 1853 when neoclassical architecture was all the rage. The tomb of Sir Isaac Brock, commander of the British forces, is set in a lovely leafy park with a gorgeous view of the Niagara Gorge, with its red limestone cliffs and restless aquamarine water. Here we meet a young tour guide named Nathanial, who is about as passionate a war buff as you’re likely to encounter. “My mum read me a story about 1812 when I was six,” he says of his lifelong fascination for all things British and military.

Nathanial leads us on an extremely detailed walking tour from the base of the tomb down through the woods to old Portage Road, providing my fascinated son with every conceivable theory as to where, precisely, on this rocky traders’ path, General Brock was brought down by musket fire on October 13, 1812.

Watching Nathanial wend his way through oak and maple in his candy-red coat, his plumed hat bobbing as he steps lively over logs, it strikes me that camouflage wasn’t the best uniform back then. Soldiers needed less to blend into the forest than to stand out from their foes on the disorienting battlefield. In any event, I wouldn’t be able to lose my guide and my son in these woods if I tried.

Back at the monument, you can climb a tiny, narrow stone spiral staircase to catch a view of the Niagara River from the top. Geoffrey scampers up while Nathanial shows me his personal treasure box, containing found musket balls, officers’ buttons — and a piece of fluff from the carpet of Prince William’s wedding to Kate. “My girlfriend and I snuck into Westminster Abbey after the ceremony,” he proudly explains. The June evening is beginning to glow when we finally part ways with Nathanial and head into Niagara-on-the-Lake for dinner. There are plenty of places to dine in this pretty town, but in 1812, when Niagara-on-the-Lake served as capital of Upper Canada, there was one popular spot that still exists today called the Olde Angel Inn. Geoffrey and I find one of the few remaining empty tables in this historic, boisterously-populated dining room and enjoy delicious traditional pub fare: steak and Guinness pie in puff pastry for me and halibut and chips for my boy, who is still digesting all he’s learned about muskets and cannons and sieges.

Afterwards, we check into the Pillar and Post, a five-star inn within walking distance of the town’s main streets. Guests are enjoying the region’s wine by the swimming pool as the moon rises, but we go straight to our spacious room and wallow in the Jacuzzi.

The next morning, we explore Niagara-on-the-Lake. Unless you’re taking in one of the plays at the Shaw Festival or doing a garden tour, it doesn’t take long to absorb the village’s charms. It’s mostly fudge, strawberry tea and souvenirs in twee shops. We buy a Royal Wedding mug in honour of Nathanial and head over to Fort George on the outskirts of the town.

Fort George, which stands opposite American Fort Niagara on the other side of the river, was the cultural heart of Niagaraon- the-Lake 200 years ago. The townsfolk would come to hear officers play Scottish country dance music with penny whistles and clarinets, or dine on Cornish pasties and drink claret. Given its Anglophile origins, it’s striking to experience Fort George on a day when Parks Canada had brought in 100 new Canadian families to learn how to camp overnight. Men from Somalia and Niger play soccer with their children while immigrants from China pose laughingly with wooden muskets. The families sample an array of Regency-period musical instruments presented by local musicians in costume and listen to a surgeon’s talk about how to stanch the wounds from musket shot.

Geoffrey, much to his delight, is the only one to sign up for a tour of battle fortifications, so he is personally escorted here and there to learn about regency-era military strategy by a perspiring redcoat while I loll in the grass. Swallows dart around the fort’s old stone chapel in the green-gold light of a summer afternoon; the whole place is filled with quiet corners where there is nothing on the wind but birdsong. This peace is its own monument to what the war achieved.

At 6 p.m., we’re all handed “rations” of chicken soup in paper cups, along with buns and juice, after which the Parks Canada folks help set up tents and build little fires for marshmallow roasting. They’re hoping to introduce new Canadians to the fun of sleeping outdoors and eating campfire treats — and to prompt people to seek out more remote Canadian camping opportunities once they’ve settled into the country. To that end, Mountain Equipment Co-op is also on hand, demonstrating their gear. It’s hard to tell from the general air of contentment in the sweet June evening whether the gambit will pay off in the future.

Geoffrey, for his part, is entirely intent on the past. We have been invited to sleep in the soldiers’ barracks, where men would have lain cheek by jowel in low-slung bunkbeds, hearing the creak of the wood and the distant murmur of the river. Will ghosts rattle their ancient scabbards in the night? We roll out our sleeping bags in the long-abandoned barracks; my son seems a little too excited to sleep at first. In the end, he’s so tired that he passes out and doesn’t hear a peep. But I do.

A Muslim call to prayer wafts musically across the dusk air from somewhere within the fort. The bloodied soldiers of 1812 would have been astonished. 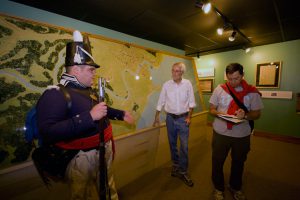 The cannons that fired on September 11, 1814 set off the Battle of Plattsburgh, the last fight of the War of 1812. Two Canadians go south of the border to make things right.