Behold the nation’s most famous slug.

R. Jeanette Martin of Gabriola Island, B.C., might not have expected her time-lapse of a Pacific banana slug devouring a dandelion to rack up almost three million views in less than a week, but it appears that at least some viewers are ready for a break from kittens and predator-prey chases.

These huge gastropods aren’t classically cute or majestic, but as Martin, a former Toronto-based photojournalist, told the CBC, they are nevertheless fascinating — however generally under-appreciated — creatures. “You’re sort of passing them by and you don’t see these moments. [Making this video] also showed me what slugs do to my vegetables every night.”

Pacific banana slugs are common not just around Vancouver Island but in humid forests from Alaska to California, most easily seen in nature attempting to cross pathways to moist, shady safety or feeding voraciously, albeit slowly, on leaves, fungi, feces and other detritus. Martin’s 36-second video is a compression of about 30 minutes of dandelion chewing.

While this especially charismatic banana slug was about 15 centimetres fully extended, the species can reach up to 25 centimetres in length, making it the world’s second-largest terrestrial slug after Europe’s black keelback species.

As many of the thousands of comments on this video prove, slugs are intriguing (some would say in an “icky” way), but they can be rather cute, too.

This large BC slug was consuming a dandelion in my backyard, so I set up a time lapse video of it eating. This is potentially the best thing I’ve ever filmed. Taken over approximately 30 minutes on Gabriola Island, BC. ©2017 shutterjet/R Jeanette Martin 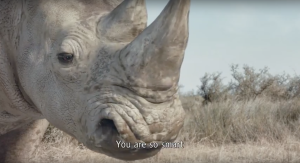 Video of the Week: Rhinoceros talks back in new anti-poaching PSA