The surprising links between people and plants in the North

Just as traditional knowledge of plants is helping northern researchers, the plants themselves have much to teach us about human history in the North
By John Bennett
Advertisement

A visitor to an isolated spot on the coast of Nunatsiavut, the Inuit region of Labrador, might be surprised to discover a patch of rhubarb growing there, but she’d be looking at evidence of a generations-old relationship between people and plants in the North.

Oberndorfer, who earned her PhD in 2016, began her doctoral research by asking people in the Inuit community of Makkovik, on the Labrador coast near the transition from boreal forest to shrubby taiga, for advice on choosing a topic. The response was enthusiastic. “They wanted their cultural plant knowledge — especially elders’ knowledge — to be documented,” she says. “They also wanted to learn more about the plants that grow in the places families use for fishing and hunting.”

With guidance from local cultural expert Carol Gear and from Todd Broomfield, who has intimate knowledge of the land around Makkovik, Oberndorfer spent nearly two years building a strong relationship with the community, visiting homes and listening to peoples’ stories about plants. Then she travelled by boat with Broomfield to investigate sites he recommended.

“After a lifetime of being out on the land you know where to look,” says Broomfield, “like where there’s a good harbour on an outside island, or fresh water — the things that brought humans there way before us. We know where all the sites are because we still use the land the same way.”

“The evidence that people used a place many years ago — their footprints on the land — is often hard to find,” continues Broomfield. “But if a site has a lot of hemlock [purple-stemmed angelica] that’s a dead giveaway — it’s a tent or a sod house site.”

“Those plants are usually only found on the mainland, often in areas with high calcium,” Oberndorfer says. “But we’re finding them on offshore islands where seal bones and mussel shells, discarded over generations, have enriched the soil with calcium, magnesium and phosphorous.”

In other places, luxurious clumps of willow stand out from the sparse surrounding vegetation. Growing in soils enriched by rotting wood, they mark the former locations of buildings from two centuries of commercial cod fishing. Rhubarb, introduced to Inuit by Moravian missionaries in the 18th century, still grows on abandoned homestead sites.

While human activity often reduces plant diversity, at these sites it has actually increased, and unique plant communities have formed because of generations of human use.

Oberndorfer is now compiling a book on the relationship between people and plants in Makkovik, and the community is pleased. “Erica tapped into the knowledge that’s in this community right from the start,” says Broomfield, “and brought it together with scientific knowledge. 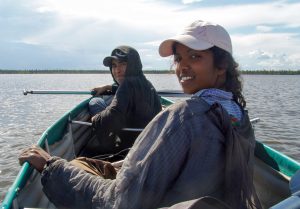