The mystery of the disappearing caribou herd

An entire herd of barren-ground caribou went extinct while another was simultaneously born.

What may seem like an obvious error in judgement actually represents what one researcher calls a kind of willful blindness in terms of our knowledge of caribou movements and migration.

For years, researchers defined the seven migratory barren-ground caribou herds that move around the north of Canada by the calving grounds they thought the animals were loyal to.

And then one day, the Beverly heard didn’t show up to calve near Garry Lake, Nunavut. Some researchers panicked even though people in the communities knew what was going on all along – they’d just moved more than 200 kilometres north to the western Queen Maud Gulf, sometimes overlapping with a nearby non-migratory herd.

But work done by wildlife ecologist and geospatial analyst John Nagy shows that barren-ground caribou aren’t necessarily as loyal to calving grounds as once thought. In fact, they can act a lot like humans. They can get romantically involved with the wrong crowd and adopt a new herd. When the time seems right, they pick up and move en masse to a more suitable location.

Nagy says the old line of research was based on a more limited ability to track the animals, mostly from people following herds around in airplanes and proclaiming what they do. But the beauty of satellite collars is that they provide a much clearer picture of what individuals actually do.

Much of this should be obvious when looking back over massive climate changes throughout history. “If caribou were that fixed in what they do, they wouldn’t have expanded to recolonize virtually all of North America,” Nagy says of the caribou after the last ice age. “They have a much greater ecological plasticity than we believe they’ve had.”

Some of this also makes sense from a genetic viewpoint. Nagy says recent research shows there’s very little genetic difference between all of the barren-ground herds in North America. The herds sometimes overlap during breeding times and researchers are just starting to get a better idea of what they do.

But there’s still a number of lingering questions Nagy hopes to answer with future research. Since most of the tracking they do is on cows, there is very little knowledge about male caribou behaviour and movement.

“You’re limited by the amount of collars you have,” he says. 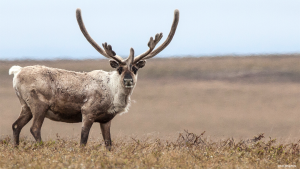