The Embassy of Norway has gifted Canada with the first English translation of Roald Amundsen’s Northwest Passage diaries, reaffirming a shared polar past and future

At noon on June 1, 2017, the bells in the Peace Tower played “Oppå Fjellet” (“Up in the mountains”) by Norwegian composer Edvard Grieg and other songs over Ottawa in honour of explorer Roald Amundsen’s 1903-06 journey through the Northwest Passage. At the same time about 90 metres below, Anne Kari Hansen Ovind, Norway’s Ambassador to Canada, presented the first-ever English translation of Amundsen’s expedition diaries to the speakers of the House of Commons and Senate — a gift to Canada for its 150th anniversary year — and the volumes were placed in a special location in the Library of Parliament.

The same tunes were playing at 50 Sussex later that evening as the Norwegian embassy joined The Royal Canadian Geographical Society in a celebration not just of the Canadian release of the journals, but also of the countries’ historically strong diplomatic ties as pioneers in polar exploration and science, and as modern Arctic nations and policymakers.

“It is essential to understand the past, but also to prepare ourselves for the future,” said Ovind to the 100 people gathered at the Society’s new headquarters. “The Arctic is undergoing immense change. Equally important is engaging with the representatives of local and regional authorities and Indigenous Peoples, and ensuring sustainable economic development.”

In fact, while the fresh translation — a multi-year undertaking that began with the painstaking transcription of the original 1,200-page handwritten record — chronicles Amundsen’s successful three-year expedition to become the first to navigate the Northwest Passage, the most valuable legacy of the voyage is the crew’s friendship with and dependence on the Netsilik Inuit families of the central Arctic.

The translated record of this reciprocal relationship, explained Geir O. Kløver, director of the Fram Museum in Oslo, Norway, means that a truly rare insight into the day-to-day life of the Inuit at the turn of the century is now available to Canadians and a much larger audience. Combined with his scientific background, Amundsen recognized that traditional Inuit knowledge was crucial to his success locating the North Magnetic Pole and transiting the Northwest Passage, and even aided in his survival.

“Amundsen’s strong and respectful relationship with the Netsilik Inuit helped him bring honour to his country,” the Honourable Nellie Kusugak, Commissioner of Nunavut, told the 50 Sussex audience. “I am very proud of the kindness and wisdom showed to him by the Inuit. Just so, when we were small [growing up in Rankin Inlet] and more and more southerners were coming up North, my father used to say to us that we were to welcome them. That they were our responsibility.”

Amundsen did not forget this hospitality — nor the skills he acquired in Canada’s Arctic, which he later applied to his South Pole expedition. “This gift being made by Norway to Canada, then, is a gift of knowledge, much of it transferred by the Inuit to Amundsen and his crew,” said John Geiger, CEO of the RCGS. “It speaks to geography, to exploration and to important lessons that needed to be learned then, and now, from the Inuit.” 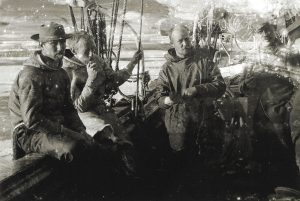