Remembering His Royal Highness The Prince Philip, Duke of Edinburgh

Prince Philip is considered one of the first environmentalists

His Royal Highness The Prince Philip, Duke of Edinburgh, died peacefully at home at age 99 on April 9, 2021 — just two months before his 100th birthday.

The duke was the longest-serving spouse in the monarchy’s history and had recently returned to his royal residence at Windsor Castle after spending a month in hospital and undergoing a procedure for a pre-existing heart condition.

He was revered for his steadfast and constant support of the Queen. He had no constitutional power, as a male consort to a female sovereign, but no one was closer to the monarch. He focused his time on hundreds of projects and programs, ranging on youth, science, the outdoors and sport. He gave more than 60 speeches every year on his numerous interests.

Prince Philip was born on June 10, 1921, on the Greek island of Corfu. As a teenager, with war looming, Prince Philip pursued a career in the military, becoming a cadet at the Britannia Royal Naval College — where he first met 13-year-old then-Princess Elizabeth. They married in 1947, just five years before she became Queen.

Philip served on the battleship HMS Valiant in the Mediterranean fleet after graduating, and by 1942 was one of the youngest First Lieutenants in the Royal Navy, serving on HMS Wallace. He gave up his military career as Queen Elizabeth ascended the throne.

“I was saddened to learn this morning of the death of HRH Prince Philip, Duke of Edinburgh,” said RCGS Fellow Ken Hedges. “He had served in an active capacity as Patron of the British Trans Arctic Expedition of 1968-1969. With respect I join the College of Fellows of the Royal Canadian Geographical Society in extending my heartfelt condolences.”

Notably, Prince Philip is considered one of the first environmentalists — before the term was common. He warned regularly of the “greedy and senseless exploitation of nature,” and spoke about the greenhouse effect as early as 1982.

“The Royal Family joins with people around the world in mourning his loss,” the Palace’s statement said.

“He helped to steer the Royal Family and the monarchy so that it remains an institution indisputably vital to the balance and happiness of our national life,” said prime minister Boris Johnson.

He was a patron, president or member of more than 780 organizations, and he served as chairman of The Duke of Edinburgh’s Award. He retired from royal duties in 2017.

“We are deeply saddened by news of the passing of His Royal Highness The Prince Philip, Duke of Edinburgh, and join Canadians and people throughout the Commonwealth in remembering with gratitude his life of service, and loyalty,” said RCGS CEO John Geiger 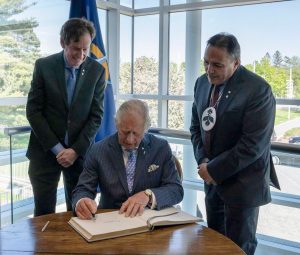