The renowned Arctic landscape painter and Fellow of the Royal Canadian Geographical Society lost his battle with cancer on Nov. 5, 2021
By Bob Ramsay

I didn’t know Cory long or well. But I knew him intensely.

He spoke this past summer at a RamsayTalk following the screening of his latest film, Into the Arctic, about the top two-thirds of Canada.

We had the usual back and forth around producing a Zoom talk for 600 guests, all fans of Canada’s North or of painting and exploring.

What was unusual was how we moved from professional strangers to great friends during the course of an hour. He was friendly, funny and up for any idea to make the show better. He lacked the pedestal that often distances artists and explorers, making it feel that anyone could traverse thousands of kilometres of Canada’s Arctic and capture its grandeur in oil and watercolours so memorably.

Cory was that rarest of Canadian creatures — an artist-filmmaker-entrepreneur-explorer. And when he was done introducing his documentary to us on the day before Canada Day, he’d won legions of new fans.

One reason is that his personal qualities seemed to embody our finest national ones, the way Mark Carney, Louise Arbour and Mary Simon do on the world’s stage.

Just watching him on the screen, I felt, this is the best of what it means to be Canadian.

I was clearly not alone. After the screening, dozens of requests landed in my inbox asking where and when his next exhibition would be. Meeting him and his works for the first time on the screen, these new fans wanted to see them both in person. As it turns out, Science North in Sudbury, Ont., is hosting a show of his latest paintings from Nov. 13 through Feb. 22, 2022. We had planned to take a busload of fans to the opening with Cory onboard. Again, he was up for anything, brimming with ideas to make the trip even more memorable.

On that Zoom call in July, he told us more about his cancer, which he’d decided to reveal nearly a year before.

We all know people who use their optimism to fight their illness. But Cory’s was different. He seemed able to function at an incredibly high level despite his treatments and dire prognosis. He was as “let’s do it” and light-hearted after his illness had spread as before.

Then suddenly, he was gone. I knew him and wanted to know him better — but of course had never actually met him.

It goes to show that for one person new to Cory’s lovely life, happiness makes up in height for what it lacks in length.

More about Cory’s life and legacy:

• Seeing the Arctic through an artist’s eyes (Can Geo Travel) 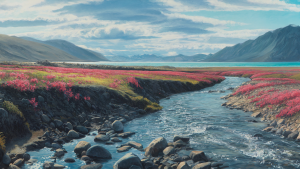 Into the Arctic: The paintings of Cory Trépanier 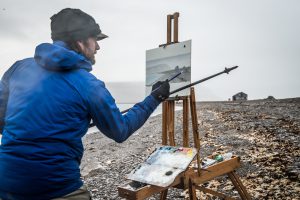 New Cory Trépanier exhibition displays paintings from across the Arctic

A decade in the making, these paintings show most of the northern national parks in all their beautiful variety