“I was hit three times in a row, the last time so hard on the back of my head that I stumbled and almost fell.”

The assailant? A crow.

The particular incident described above is one of many crow attacks that have been documented on CrowTrax—an interactive map created by Langara College GIS instructors Jim O’Leary and Rick Davidson—to track aggressive crow behaviour in Vancouver and Victoria, B.C.

Canadian Geographic spoke to O’Leary to learn more about the map and find out if he himself has yet to fall victim to a crow attack.

How did you come up with the idea to create this map?

Last year our building had a big crow’s nest right out front, and almost every day someone would come in complaining about getting smacked in the back of the head by a crow, so that’s what initially sparked the idea. Rick and I had also just started a GIS program at Langara College and this map is a good example of how GIS can be used.

How many submissions have you had? We’ve had about 1,300 ‘real’ submissions and a few hundred others that we excluded because they were clearly untrue or very exaggerated. Initially people could just go to the website and document their attacks, but we quickly realized that some of these weren’t legitimate, so now Rick and I go through the submitted reports every day before they’re published.

Is the map showing any crow attack hot spots?

Most of the documented attacks are in downtown Vancouver and the west end. This makes sense because crows like the security of tall trees found in the west end and they also love garbage which is plentiful in these areas due to the large population and numerous restaurants.

How does someone document an attack?

The process is pretty simple. You click on the map where you were attacked and a form pops up where you select the severity of the attack (on a scale of one to five) and write a brief description of the incident. These descriptions can be quite funny. For example, we had one claiming a crow attacked a person carrying an entire rotisserie chicken down the street. As a result, they dropped the chicken and more crows flew over to gobble it up.

Have you ever been attacked by a crow?

I’ve never actually been attacked but I’ve certainly been cawed at. Recently I was walking up Rupert Street and I saw a fledgling on the ground. It took me a minute to realize what it was but once I did I almost immediately recognized the sound of cawing in the near distance and turned around to face the mother flying overhead. They attack from behind, so if you turn around there’s a better chance they’ll leave you alone, which it did in this case—after I kept walking for about a block.

Does the map serve a particular purpose?

It’s data that could be useful for research purposes to learn more about crows and their attacks on humans. I know government officials are aware of the map so they’re certainly welcome to use the data in the future if they so wish. It also serves as an example of how GIS can be used. I also think it’s a great outlet for people to vent. We had one person write about being attacked 10 years ago. That’s the thing about crow attacks—they really traumatize people because they’re so unexpected.

Will you make a similar map for other animal attacks?

There are certainly a lot of other animals that might be worth documenting like encounters with racoons or bears. But I’m not sure anything will have the same traction as the crows. It’s really touched a nerve with some people and I’m actually surprised at the amount of submissions we’ve had. Just about everybody I talk to has a crow story. 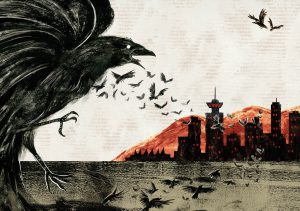 In the company of crows

Our feathered friends are increasingly calling our urban centres home. Why crows in particular are nesting among us.