You may only see Bambi, but the City of Ottawa’s Amy MacPherson cautions white-tailed deer can be dangerous.

As part of the City of Ottawa’s Wildlife Speaker Series, MacPherson, along with other speakers, recently warned of some of the lesser-known fawn facts that many Canadians aren’t aware of.

Not only do these deer carry ticks that can spread Lyme disease, but they are also at the forefront of many car accidents.

While white-tailed deer are typically nocturnal, they can be active any time, and are often spotted along roadways at dusk and dawn. Even for careful drivers, they may be hard to detect, particularly as these deer can reach speeds of up to 58 km/h and jump two-and-a-half metres high and nine metres horizontally.

As part of its Integrated Road Safety Program, Ottawa launched the “Speeding Costs You Deerly” campaign in 2006 to reduce vehicle collisions. Since its inception, deer-vehicle collisions in Ottawa have decreased by 38 per cent, with an estimated social savings of $1.1 million.

Besides causing vehicle collisions and being carriers for disease, white-tailed deer destroy vegetable and flower gardens, agricultural crops and forests. Heavy populations are not only destroying the ecosystem they trample on, but they also make it hard for new plants to grow and thrive.

The Ministry of Natural Resources and Forestry has taken a number of measures, including extended hunting seasons and offering deer removal tags to farmers and airports so they may legally kill or harass deer off their property.

Deer can also learn to avoid high-risk areas or modify their behaviour to avoid being killed.

Another way to create a landscape of fear is developing areas of refuge, where hunting cannot take place, making deer more easily manageable. 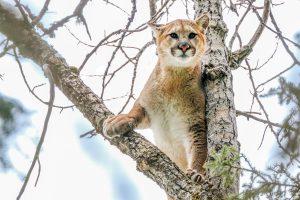