The plight of Lynx canadensis, which is not at risk in Canada but threatened in the United States, highlights the difficulty of conserving species across borders

No wonder one of North America’s most iconic species is called the Canada lynx. The elusive big cat has it pretty good here, with a range that includes every province and territory except Prince Edward Island, and a status as a species that is not at risk.

South of the border, however, where its range is limited to 14 states and it’s listed as threatened, the fate of Lynx canadensis is more precarious — and more controversial. There, it and a host of other iconic wildlife species are at the centre of ongoing legal battles over habitat protection that involve conservationists, the U.S. Forest Service, the U.S. Fish and Wildlife Service and the logging industry.

Perhaps nowhere in the United States is this conflict being played out more frequently than in the courtrooms of Montana, which is said to support one of the healthiest populations of the animal in the lower 48 states and is home to one of two regions the U.S Fish and Wildlife Service has identified as being necessary to support the continued long-term existence of the animal in the contiguous United States (the other is the North Cascades region of Washington state).

In January, the U.S. Forest Service temporarily postponed a 731-hectare logging project in Custer Gallatin National Forest, the bulk of which is located in south-central Montana, northeast of Yellowstone National Park. The agency’s decision came after a federal judge blocked the project in November, citing a lack of the required formal consultation between the U.S. Forest Service and the U.S. Fish and Wildlife Service about how the project would affect Canada lynx habitat. At the time, the Alliance for the Wild Rockies, which had filed an injunction to stop the project, called the decision a victory for the Canada lynx and other species. “The [U.S.] Forest Service wanted to sacrifice lynx, grizzly bear, and elk habitat to subsidize the timber industry to the tune of $588,000 federal taxpayer dollars,” said Mike Garrity, the organization’s executive director, in a statement.

In December, Garrity’s organization and three other conservation groups filed suit in a federal district court to block a 300-hectare logging project in northwestern Montana’s Flathead National Forest, portions of which are prime habitat for the Canada lynx, as well as for species such as fisher, grizzly bears, elk and great grey owls.

None of these legal actions directly involve Canada, of course, but this country’s population of lynx does play a crucial role in the health of the Lynx canadensis population in the United States. Lynx aren’t migratory but do move between states such as Montana and Canada, and research has shown that maintaining habitat connectivity — something that development and logging can disrupt — with lynx in Canada, where the core of the cat’s North American geographic range is, is essential for the recovery of lynx populations in the United States.

Any potential recovery could face serious threats if Republican politicians emboldened by the election of President Donald Trump succeed in curtailing the influence of the Endangered Species Act, which some believe has long been used to slow or stop economic development. “It has never been used for the rehabilitation of species. It’s been used for control of the land,” Rob Bishop, the chairman of the House Natural Resources Committee and a Republican Congressman from Utah, told the Associated Press on Tuesday. “We’ve missed the entire purpose of the Endangered Species Act. It has been hijacked.”

The Associated Press reported that Bishop said he “would love to invalidate” the law and would need other lawmakers’ co-operation. 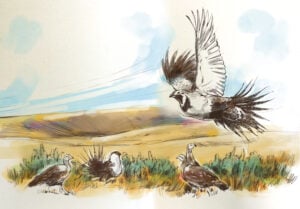