Although much of the live festival programming has been cancelled due to the pandemic, flower fans will still be able to celebrate online

Keep calm and tulip on.

That’s the message organizers of the Canadian Tulip Festival are sending to flower fans in Ottawa and around the world as the festival prepares to celebrate the 75th anniversary of the end of the Second World War in the midst of a pandemic.

The annual 10-day celebration of Canada’s enduring bond with the Netherlands, set to kick off on May 8, will look a bit different this year, as all outdoor programming has been cancelled in accordance with public health guidelines to stop the spread of COVID-19. Instead, many of the activities planned for this year will be presented virtually.

“We’ve gone through and basically taken every piece of the festival that we could mount online,” says Jo Riding, the festival’s general manager. “It’s an important anniversary and it still deserves to be celebrated proudly.”

The festival celebrates the liberation of the Netherlands by Allied forces on May 5, 1945 through a dazzling display of nearly one million tulips, blooming in public gardens and parks across the city. As a sign of her gratitude to Canada for sheltering her family during the war, the future Queen Juliana sent 100,000 tulip bulbs to Ottawa in 1945, promising to send 10,000 more each year thereafter. By the 1950s, Ottawa’s tulips had become famous, and in 1953, photographer Malak Karsh helped organize the first Canadian Tulip Festival honouring Juliana’s gift.

This year, the festival had planned several special activities to mark the 75th anniversary of the end of the war, including a military parade for veterans, interactive exhibits highlighting Canada’s role in the war, and, for the finale on May 18, a vintage Victory Day parade. Princess Margriet of the Netherlands, Juliana’s daughter who was famously born in Canada in 1943 but retained Dutch citizenship when the maternity ward of the Ottawa Civic Hospital was temporarily declared extraterritorial, was also set to visit Ottawa this year, but that visit has been postponed.

Among the exhibits that will be available online is an interactive map, set to an original musical score, of Ottawa’s Glebe neighbourhood and its experience of the war. “It has 472 faces on it who left for the war and didn’t come back,” says Riding. “That’s just a tiny portion of Canada, but we chose the Glebe because it’s right next to where the festival normally lives, so you’re standing in the heart of the story whether you knew it or not.”

Another virtual highlight is Project ’44, a major effort by the Canadian Research and Mapping Association to trace the decisive Battle of Normandy through the daily war diaries of the First Canadian Army.

“If you know your relative’s regiment and division, you can find his unit’s war diary and track how the liberation went for him day by day,” Riding says.

The festival is also launching a YouTube channel, Tulip TV, to share behind-the-scenes videos from its museum partners and the official gardeners at the National Capital Commission, and will roll out daily interactive contests, challenges and tulip-themed activities on social media.

And of course, the tulips will still bloom — but does that mean you should go and see them?

“We don’t recommend it, but we know it will be hard to stop folks,” says Riding. “It’s really important that if they choose to go, they recognize that they’re tuliping at their own risk, and they really need to follow the rules — keep moving, don’t cluster. It’s vital.”

The NCC has closed its Ottawa parks to all activities except walk-throughs in keeping with provincial directives. In a statement to CTV News Ottawa, the commission asked visitors to respect the rules, stay close to home and only visit parks accessible on foot or by bike.

Ultimately, Riding says, the festival will remain a symbol of the triumph of hope over hard times.

“Malak Karsh, the founder of the festival, said that when the tulips bloomed in Ottawa, it was the first time the city had seen colour after such a grey time,” she says. “They’re a reminder that sacrifices happen, but we get through it. We’ve made it through so much worse.”

Check out some spectacular photos of past tulip festivals from members of the Can Geo Photo Club and our staff: 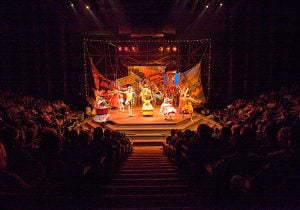