It’s time to listen to the Inuit on climate change

Because temperatures in the Arctic are rising faster than anywhere else in the world, we must look to the experiences of Inuit as a harbinger of what is to come — and seek their guidance on how to live sustainably 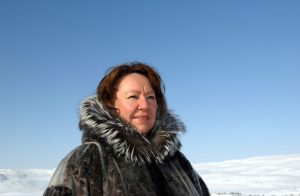 When other regions of Canada and world are struck with major environmental and natural disasters, communities, first responders and the media rush to their aid. Not so for the Inuit and other Indigenous peoples of our country, who have already experienced life-threatening emergencies on many levels, and are now at the front lines of the slow, multifaceted disaster that is climate change. Because temperatures in the Arctic are rising faster than anywhere else in the world, we must look to the experiences of Inuit as a harbinger of what is to come, and seek their guidance on how to live more sustainably.

Virtually every community across the North is now struggling to cope with extreme coastal erosion, thawing permafrost, and rapid destructive runoff, which particularly affects coastal communities in Alaska and in northern and western Canada. Despite our cold northern winters, sea ice remains in rapid decline. Glacial melt, long relied on for drinking water, is now unpredictable. In one stunning case, the Kaskawulsh Glacier in the Yukon has receded so far that its meltwater has changed direction, flowing south toward the Gulf of Alaska and the Pacific Ocean instead of north toward the Bering Sea. Ice that used to serve as our winter highways is giving way and invasive species are travelling much further north than ever before. While the impact and extent of each change varies across the North, the trends are consistent. The change is not just coming, it is already here.

Melting Arctic ice has also attracted the attention of foreign governments, researchers and corporations who see an opportunity to access its wealth of resources. But, this interest has to be better informed by awareness of what is happening to Indigenous communities, who are trying to cope with the grave reality of their changing environment.

Recently, the United Nations Intergovernmental Panel on Climate Change (IPCC) issued a special report on the impacts of global warming 1.5°C above pre-industrial levels. The report paints a stark picture: humans have already caused approximately 1.0°C of global warming and without an immediate and concerted effort to reduce greenhouse gas emissions, the 1.5°C threshold will be reached sometime between 2030 and 2052. In order to arrest this dangerous trajectory, the world has to take note of what is happening in the Arctic — because what happens in the Arctic does not stay in the Arctic. Arctic ice is the planet’s air conditioner; as it melts, that air conditioner is breaking down, creating havoc around the world.

Since then, environmental advocates around the world have sought to protect human rights affected by dangerous climate change through various kinds of legal proceedings. Given that the United States is walking away from the Paris Agreement and other governments have been slow to act, recent cases in the Netherlands, Colombia and the United States suggest that climate litigation may increasingly be seen as an essential tool to protect human rights and to safeguard the environment.

Although it can be hard for individuals to grasp the urgency of the situation, make no mistake: climate change will negatively impact our quality of life. Asserting this human perspective could help to spur action where other approaches—such as highlighting only the impact on wildlife like polar bears and coral reefs—have not yet achieved sufficient results. Inuit have much wisdom to share with the world about living sustainably, in harmony with nature—all while coping with the effects of climate change.

Inuit and Indigenous peoples provided life-saving guidance to early European visitors unfamiliar with the severe conditions of this land, which they ignored at their peril. The whole planet benefits from a frozen Arctic and Inuit still have much to teach the world about the vital importance of Arctic ice, not only to our culture, but to the health of the rest of the planet.

Sheila (Siila) Watt-Cloutier is a senior fellow at the Centre for International Governance Innovation, a 2007 Nobel Peace Prize nominee and author of the acclaimed book The Right to Be Cold, published in 2015. She is Inuk and one of the most widely respected political figures to emerge from the Arctic.
Advertisement
climate change Inuit arctic the north indigenous