Arctic sea ice is unforgiving. It can break apart suddenly, leaving you stranded on a floe. It can crush a conventional ship like an eggshell. And it can wreak havoc on a poorly designed offshore structure.

But as the climate warms, there is less Arctic sea ice. Does this mean the North is becoming an easier place to operate offshore exploration rigs and perhaps wind turbines or tidal power generators? According to Michelle Johnston, a Research Council Officer with the National Research Council, less ice-cover can actually bring more risk. Her research is helping engineers design structures that can withstand the worst punishment ice can throw at them.

Johnston and her team study multi-year “ice hummocks.” But don’t be fooled by the innocuous-sounding name: “These are extreme ice features,” says Johnston. “They can be well over 10 metres thick and are considered the most severe type of sea ice.” It was one of these, in the Beaufort Sea in April 1986, that exerted the greatest pressure ever measured against an offshore exploration rig, as slowly advancing pack ice drove it into the structure with pulverizing force.

Ice hummocks form when sea ice, in perpetual motion due to tides, currents and winds, collides and piles up into steep pressure ridges — the bane of Arctic travellers who have to manoeuvre their snowmobiles or dog teams and sleds over or around them. If a ridge lasts through the summer, the new winter ice, and possibly new pressure ridges, form around it. After ice has survived two summers it becomes multi-year ice, which can be very hard and strong. The most extreme features form when several ridges of multi-year ice combine to form a large, dense mass of hummock fields.

“Ships stay away from multi-year ice where possible,” says Johnston. “Hummocked multi-year ice features can usually be seen from [a ship’s] bridge in good weather, so serious efforts are made to avoid them.”

Immobile offshore structures, of course, don’t have that option. What’s more, when summer ice-cover decreases, there is more space for the ice that remains, including multi-year ice hummocks, to be moved around by wind and currents, colliding with anything in their path.

“We need to understand how extreme [ice] features behave,” says Johnston, “so we can help engineers design structures to withstand the enormous forces they can exert.”

To that end, she and her team have developed new tools to penetrate the depths of multi-year ice and measure its temperature, strength and salinity. “We’ve measured ice thicknesses of up to 21 metres,” she says, “ and we have measured the properties of two 12-metre-thick multi-year ice hummocks from crest to keel — the only two hummocks that have ever been strength-tested to that depth in the field.”

“Those two hummocks were composed entirely of very strong ice,” she continues, “providing an excellent benchmark for what a structure must be able to withstand. Features like this are by no means rare in the Arctic.”

Johnston’s research is unique in the world, and her findings are regularly added to international codes for offshore structures, where they are helping raise the standards for materials and design to increase resistance to ice damage. Although the climate is warming and ice patterns are changing, there will be ice in Arctic waters — including extremely hazardous ice — for the foreseeable future. 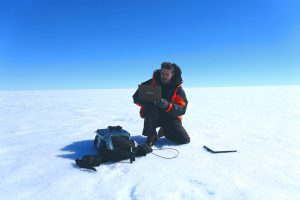