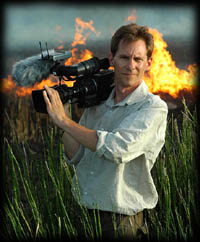 One of the perks of being an “Explorer-in-Residence” with the Royal Canadian Geographical Society is that I occasionally get invited by travel companies to join them on some of their trips, usually to off-the-beaten-path destinations. For almost two years now I’ve been looking forward to joining a voyage with Maple Leaf Adventures aboard their catamaran Cascadia to round the northern tip of Vancouver Island, then head down the west coast to the Brooks Peninsula. Of course, the global pandemic put an abrupt stop to those plans, but as more and more Canadians got vaccinated, the trip was rescheduled, and I recently found myself on a flight to Port Hardy, at the northern end of the island. After a very long lull, adventure was back on the menu!

Of course, safety remains the number one priority when it comes to travel during these times, so I was very pleased that every single person setting foot on the Cascadia received a rapid COVID test. All 15 passengers and 10 crew got a clean bill of health, which put everyone’s mind at ease. It was time to raise the anchor and set sail.

Knowing that I specialize in documenting extreme forces of nature, one very cool and gracious thing that expedition leader (and Maple Leaf CEO) Kevin Smith did specifically for me was take us on a side-quest to Turret Rock in the Slingsby Channel. Here, the Nakwakto Rapids have the strongest tidal current in the world (16-20 knots). Turret Rock is nicknamed “Tremble Island” because it supposedly shakes from the force of the current when the tide shifts from the Pacific Ocean through Seymour Inlet. There are tales of people tying ropes to the trees on Turret Rock and water-skiing in the rapid current.

The Cascadia has two custom-built tenders that are launched by crane and can be used for going ashore or just for cruising around. We all piled into the two smaller boats and timed our arrival at the channel for when the incoming tide was going to be at its peak. The amount of water that flows through the narrow channel is wild. It’s not like being in white-water rapids on a raft; it’s more like surfing on a superhighway of water.

Continuing our voyage, we rounded the northern tip of Vancouver Island, going ashore to hike along the isolated beaches and rocks, and stand at Cape Situl, the northernmost point of the island. Because I’m somewhat prone to seasickness, I was a bit concerned about what the sea conditions would be like as we got to the western side of the island where the protected channels give way to open ocean, with nothing between us and Japan but the waves and weather of the mighty Pacific. Luckily though, we were blessed with a favourable sea state and very good weather. Taking advantage of this opportunity, we cruised down to the Brooks Peninsula, ending up at Kyuquot.

Our naturalist on board, David Pinel, has spent years in the area as an adventure guide and leader in Indigenous ecotourism. His relationship with the community runs deep, to the point that he has been adopted into a Kyuquot family. David’s knowledge of coastal ecology and culture is vast, and we had the great privilege of going ashore to his West Coast Expeditions base camp, where we got to meet his adoptive family (after everyone got another COVID test, just to be 100 per cent sure we weren’t putting the community at risk).

Kyuquot is beautiful, but it is a very remote community, and life here can be difficult. There are no roads in or out, and just getting medical care can often involve a long trip by boat or float plane to one of the larger towns on Vancouver Island.

We spent a wonderful day sharing stories and learning more about Kyuquot culture. We watched as fresh salmon was fileted and cooked on an open fire, and as the fragrant smoked filled the camp, we all go to know each other a little better. I was humbled by the generosity of our hosts, and in reciprocation, everyone was invited to the Cascadia to have dinner. The salmon was brought back to the ship, where the on-board chefs served it up as we all continued to ask each other questions, learn and share the experience.

We spent several days exploring the Brooks Peninsula region, passing endless expanses of mountains and trees, sacred Indigenous burial islands, and plenty of wildlife. The sea otters were a favourite. Sometimes we’d encounter a mother, floating on her back with a pup in her lap, and sometimes “rafts” of up to 60 males floating and drifting together amongst the kelp, occasionally diving for sea urchins. Sea otters have faced tremendous challenges in this part of the world. Hunted to near extinction, their numbers have rebounded in recent years.

Backtracking north, we took advantage of the spectacular weather to spend some time cruising around the Solander Island Ecological Reserve. This tiny group of islands is home to a surprising amount of wildlife. Sea lions bask on the rocks, soaking up the warmth of the sun as puffins, gulls and the occasional albatross fly past. The captain halted our progress when we spotted a pod of orcas. At one point, two of them breached, jumping completely out of the water right at the bow of the ship. I was lucky enough to capture a rapid-fire series of photos of one of these skilled hunters mid-breach. Bucket list photo opportunity achieved!

As the pod of orcas continued to circle, we saw what we initially thought was a humpback whale in the mix. Were we witnessing a predation event? Were these orcas hunting this humpback as a coordinated pack?

As we got closer, we realized that what looked like a humpback from a distance was actually a large male orca with a collapsed dorsal fin. Typically, orcas in the wild have a dorsal fin that sticks straight up; it is very rare for one to droop over. Unfortunately, this condition is common among orcas in captivity, but to see this in the wild was not only rare, but absolutely unique in this part of the world. After I posted a photo online, a marine biologist reached out to me, recognizing the orca as B-13, nicknamed Yaculta. He was born in 1987 and is the only known wild northern orca to have a collapsed fin. Our sighting of B-13 was added to the database of sightings marine biologists use to track the location and health of these animals.

Northern Vancouver Island is a remote part of Canada that I’ve always wanted to see firsthand, and this was undoubtedly the best way to do it. We were able to spot whales, wolves and eagles, explore remote and pristine rainforests, and enjoy the hospitality of the Kyuquot people, as well as the Cascadia, a fine vessel with an amazing crew. Maple Leaf Adventures is second to none if you’re looking to explore the west coast of Canada.

George Kourounis is an award-winning broadcaster and internationally-regarded expert on extreme weather and natural disasters. He has been an Explorer-in-Residence of the Royal Canadian Geographical Society since 2018. 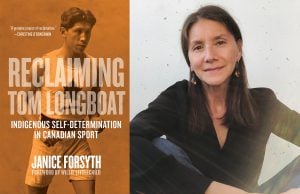 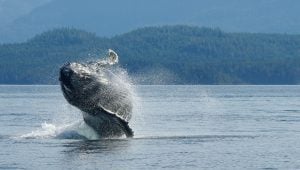