Captain James Cook was a British explorer, cartographer and navigator whose legacy lies soundly in his exploration of the Pacific Ocean. However, many of Cook’s accomplishments are tied to North America, in the polar region. Captain Cook Rediscovered: Voyaging to the Icy Latitudes, a new book from David L. Nicandri, seeks to provide a fresh view on Cook’s legacy from a North American perspective.

The few days of August 14–16, 1778, were truly intoxicating aboard Resolution and Discovery. On August 14, in clearing weather and rapidly approaching the latitudes of Samuel Hearne’s northern reach, Cook noticed land ten miles distant, Alaska’s Cape Lisburne. The hills were still “free from snow.” On August 15, as Cook kept the continent to starboard, “the sun shone out,” and the astronomers “by observation” established their latitude at 68° 18′ N. Only once before had he reached a higher latitude – during the second voyage’s extensive run above the Antarctic Circle southwest of Tierra del Fuego. Now in the extreme North, Cook was sailing freely without any icebergs or loose ice floating about. On August 16, bearing northeast unimpeded, a euphoric King wrote: “All our Sanguine hopes begin to revive, and we already begin to compute the distance of our Situation from known parts of Baffins bay.”

Foggy weather occasionally hid the shore, but birds indicated that land was near. Cook then made a note that would foreshadow future events – his first passing mention of seeing “seahorses” or walruses. On the morning of August 17, he reported: “The weather was now tolerable clear in every direction, except to the Eastward, where lay a fog bank, which was the reason of our not seeing the land.” He veered northeast looking for deeper water. Toward noon, “both the Sun and Moon shone out at intervals,” which allowed the astronomers to conduct “flying observations” that yielded his latitude at 70° 33’N. Passing the seventieth parallel was a noteworthy accomplishment but was otherwise unremarked on. Instead, Cook noted in his journal this portentous observation, clearly retrospective in nature: “Some time before Noon we percieved a brigh[t]ness in the Northern horizon like that reflected from ice, commonly called the blink; it was little noticed from a supposition that it was improbable we should meet with ice so soon.” This explained “the sharpness of the air” for the preceding two or three days, which had been masked by the enchanting work of measuring the distance to Baffin Bay.

Cook continued: “At 1 PM the sight of a large field of ice left us in no longer doubt about the cause of the brightness of the Horizon we had observed,” meaning the blink. The generally fair weather of their months-long Alaskan cruise, and more recently the snowless hills above the Arctic Circle, had lulled Cook and his men into complacency. The officers seem to have expected open water all the way to Samuel Hearne’s 72° N or, since Henry Hudson in 1607 and Constantine Phipps in 1773 had reached 80° N, perhaps higher. How else to explain being surprised by meeting ice “so soon”? Based on his Antarctic voyage or his Newfoundland career, Cook might have expected icebergs or slushy field ice as harbingers of the main pack, but here there were none. This Arctic ice, from its first appearance, “was quite impenetrable and extend[ed] from WBS to EBN as far as the eye could reach.” In tactical response, Cook temporized, plying about the edge of ice, keeping an eye on the walruses.

Cook tried to stand south, but in the face of contrary winds the ships “gained nothing.” At noon on August 18, his latitude was 70° 44’N, eleven minutes farther north than the previous day before the “blink” was observed. This proved to be the expedition’s highest reach, but in the moment, Cook was more concerned about the ice. It was “as compact as a Wall and seemed to be ten or twelve feet high at least, but farther North it appeared much higher, its surface was extremely rugged.” (At the North Pole today, the ice is only six feet thick.) As Cook intimated, flat, smooth ice is rare in the Arctic except in sections proximate to land. Pressure ridges and hummocks abound, formed after a lead opens thermodynamically or mechanically by wind and current, before refreezing causes compression. Unlike Antarctica, in the land-bound Arctic Basin, sea ice has nowhere to go when it is stressed by atmospheric conditions and piles on top of itself. In this situation, Cook saw “low land” to the southeast “3 or 4 miles distant.” This promontory “was much incumbered with ice” and, accordingly, he named it “Icey Cape.” Having lent hundreds of names to places in the Southern Hemisphere and a few on the west coast of North America, this was his only Arctic toponym.

Icy Cape is above 70° N, a degree shy of the better-known Barrow, Alaska, 140 miles to the northeast. Cook was certain this was “a continuation of the Amirica cont[i]nent,” but the larger issue was the four-way juxtaposition of the shore, his ships, the weather, and the ice – a situation that was “more and more critical.” He explained: “We were in shoaled water upon a lee shore and the main body of the ice in sight to wind-ward driving down upon us. It was evident, if we remained much longer between it and the land it would force us ashore unless it should happen to take the ground before us; … the only direction that was open was to the SW.”

Had the series of manoeuvres Cook made over the next eleven days happened on either the first or second voyage, it would be the stuff of nautical legend, but since this occurred during the fatal third voyage, the sequence is little known. First, the ships backed away from both ice and land to avoid becoming marooned. However, the wind-driven ice was also moving, and the next day, August 19, Cook was again “close in with the edge of the main ice.” Its consistency was now closer to what he had customarily seen at the Antarctic ice edge, for it was not as “compact as that which we had seen more to the Northward.” Nevertheless, it was still “too close” to manoeuvre around, and the floes were too large “to force the ships through it.”

On August 20–21, Cook stood southwest along the edge of the “main ice” in a thick fog “partly directed by the roaring” walruses. When the weather cleared, he could see “the Continent of America” about fifteen miles off his port side. Even though Cook had moved toward Cape Lisburne, a degree both south and west from where the blink had been detected,
the ice pack “was at no great distance” from the ships. It seemed as if he were being chased by the ice because the pack “now covered a part of the sea which but a few days before was clear.” Cook was not surprised by this phenomenon. Drawing on his experience with the mobility of the Antarctic ice pack, he explained: “It must not be understood I supposed any part of the ice we had seen fixed, on the contrary I am well assured that the whole was a moveable Mass.” The inquisitive Yorkshireman, now into his tenth year of exploration, conducted an experiment. When the wind stilled, William Bligh was dispatched in a small boat to see if he could detect any current but “found none.” Cook did not expand on this test until late September, by which time he had returned to English Bay at Unalaska Island. There, he concluded that a land connection between Asia and North America or its functional equivalent in the form of a contiguous ice pack running from one side of the Artic Basin to the other lay still farther north. Either would preclude the appearance of surface currents and dampen wave action. Modern studies of the Arctic have demonstrated that the ice shifts principally because of wind.

On August 23, after the fog lifted, Cook “hauled to the Westward.” Now for the first time, he recorded his thinking relative to the strategic import of running into the ice, as he thought of it, prematurely: “finding I could not get to the North near the [American] Coast for the ice, I resolved to try what could be done at a distance from it.” This gambit was right out of his Antarctic playbook. Contrary to the common (mis)understanding about Cook’ssupposedly flagging vigour during this voyage, what ensued was the boldest navigation of his career. A truly exhausted explorer, tired of discovery, would have simply turned for home after striking the ice. But not Cook, now more than two years into his third global expedition. Since
he could not head directly east, he sailed west hoping to turn the flank of the pack which, according to reigning theory, was presumed to be fastened to the continent of North America. Get far enough from land, lose the ice. 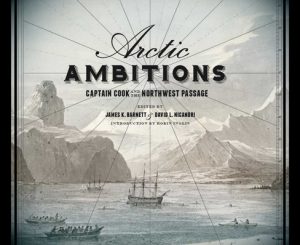 “There has been much myth making about Cook the man and Cook the navigator.”