It ended the way it began: with a bottle of whiskey.

On June 14, representatives of Canada, Denmark and Greenland gathered at 50 Sussex Drive, the Ottawa headquarters of the Royal Canadian Geographical Society to sign a treaty settling a longstanding territorial dispute over Hans Island, a small uninhabited island in the Nares Strait between Ellesmere Island and northern Greenland. The bloodless conflict became known as the “Whiskey War” because, beginning in the 1980s, Canada and Denmark took turns staking their claim to the island by planting flags and bottles of liquor — whiskey from Canada, schnapps from Denmark.

The historic accord divides the 1.2-square-kilometre island roughly in half, creating a land border between Canada and Denmark (Greenland, or Kalaallit Nunaat, is an autonomous country within the Kingdom of Denmark) and the world’s longest maritime boundary at nearly 4,000 kilometres. It also ensures Inuit in both countries will be able to move freely about the island and surrounding ice and waters, an important hunting ground since the 14th century.

“I think it was the friendliest of all wars,” said Joly, praising the diplomatic work that went into resolving the 50-year dispute. The resulting treaty is “a win for Canada, a win for Denmark and Greenland, and a win for Indigenous Peoples,” she added.

It’s also a symbolic rebuke of Russia’s invasion of Ukraine. Both Joly and Kofod said the peaceful resolution of the Hans Island dispute is proof that diplomacy works and that territorial disputes can be resolved through the rule of law instead of violence.

“We see a gross violation of international rules unfolding in another part of the world,” said Kofod. “May this agreement inspire other countries to follow the same path.”

Joly stressed that the Arctic must remain “a low-tension region.”

“We cannot fall into the trap of militarizing the Arctic,” she said. “This is important for Canadians and for the world.”

“A steadfast friend and ally”

The dispute over Hans Island (Tartupaluk in Inuktitut and Greenlandic) began in 1973 when Canada and Denmark attempted to draw a boundary through the Nares Strait and found both countries could credibly lay claim to the island, which is roughly equidistant to both Canada and Greenland. But the question of Canada’s Arctic sovereignty has an even longer history.

A century ago, Denmark was considered by some to be a competitor for sovereignty over the islands of the Arctic Archipelago. The American-Canadian explorer Vilhjalmur Stefansson, in campaigning for Canadian government support for another of his own expeditions, built his case in part on what scholar Shelagh Grant, in her book Polar Imperative, termed “alarmist and exaggerated” claims about Danish threats to Canadian sovereignty. Ellesmere Island, Canada’s large northernmost island, was, Stefansson argued, “valued enough by Denmark for her to question our title.”

As evidence he pointed to the activities of Danish-Greenlandic explorer Knud Rasmussen, who led an ethnographic expedition, known as the Fifth Thule Expedition, across the barrens of Arctic Canada from 1921-24. According to anthropologist Wade Davis, Honorary Vice-President of the Royal Canadian Geographical Society, the expedition was not about territorial acquisition but about “a state of mind, a depth of understanding that would allow Rasmussen to reveal to the world the wonder of Inuit life.”

John Geiger, CEO of the RCGS, said the timing of the Canadian-Danish accord a century after the Fifth Thule Expedition should tidily resolve any question about Danish motives. Far from being a threat to Canadian sovereignty in the north, Denmark has always proven itself a steadfast friend and ally of Canada, he said.

“Canadians should consider themselves doubly blessed that their two land borders are with the United States, and now with Denmark, in the form of Greenland.”

Aluki Kotierk, president of Nunavut Tunngavik, which represented the Inuit of Nunavut in the Hans Island treaty negotiations, congratulated the assembled diplomats on the successful resolution of the dispute, and said it’s important to recognize Inuit contributions to Arctic sovereignty.

A few matters remain to be settled, such as whether Canada’s land border with Europe means it can now enter the Eurovision Song Contest. As for the bottle of schnapps that Kofod presented to Joly? “It’s going straight to the Museum of History,” Joly said. 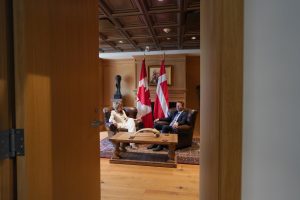 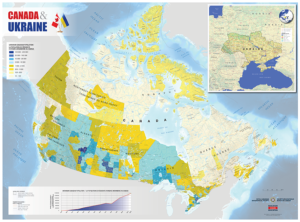 Map shows the distribution of people of Ukrainian descent across Canada, highlighting the deep connection between the two countries