10 birds to look for in Canada this summer | Canadian Geographic

The search for these iconic Canadian birds will take you to some of the most scenic locations the country has to offer
By David M. Bird
April 22, 2019

In celebration of the launch, here are my choices for the top 10 birds you should try to see this summer, from coast to coast. The search for these birds can take you to some of the most scenic places that Canada has to offer. 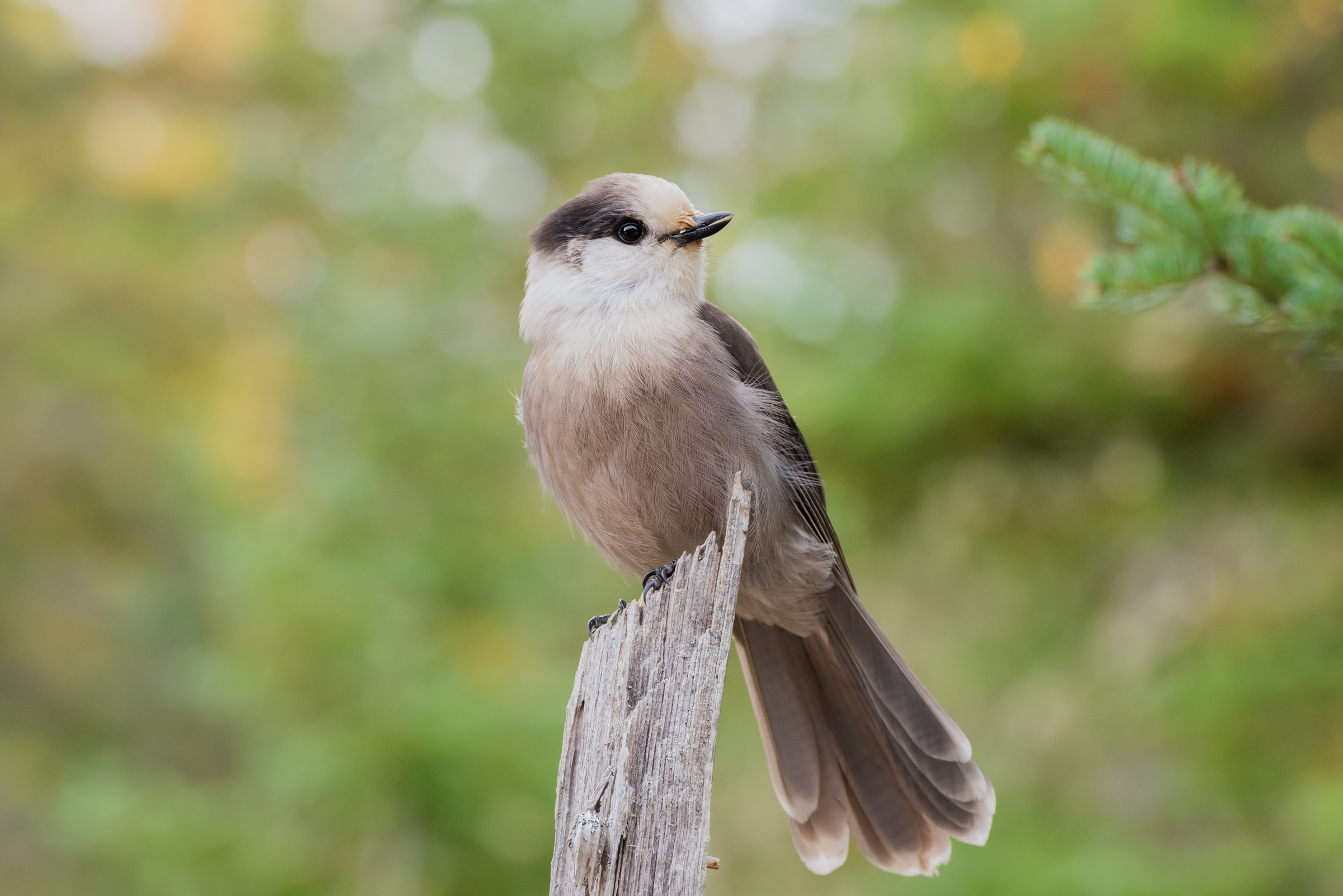 Naturally, I have to start with the Canada jay. Why? Because it’s the species that many of us hope will become the official bird of Canada sometime in the not-too-distant future. You may also know this bird as the grey jay, whiskeyjack, or by the affectionate nickname “camp robber,” inspired by its inquisitive nature and skill at stealing food. Its name was officially changed back to Canada jay last July. This friendly, intelligent bird with an understated plumage is found in every province and territory, but to see it, you will need to hike into the higher elevations of our provincial and national parks containing boreal forest.

Where to find it: Northerly forests from Alaska to Newfoundland, especially areas with firs and spruces.

What to look for: Overall fluffy grey plumage, with a white collar, dark crown, white forehead and a short bill. Its tail and wings are also dark, smoky grey.

Not to be confused with: Clark’s nutcracker, which has a longer bill and a white wing patch, or the northern mockingbird, which has no dark crown and a longer tail. 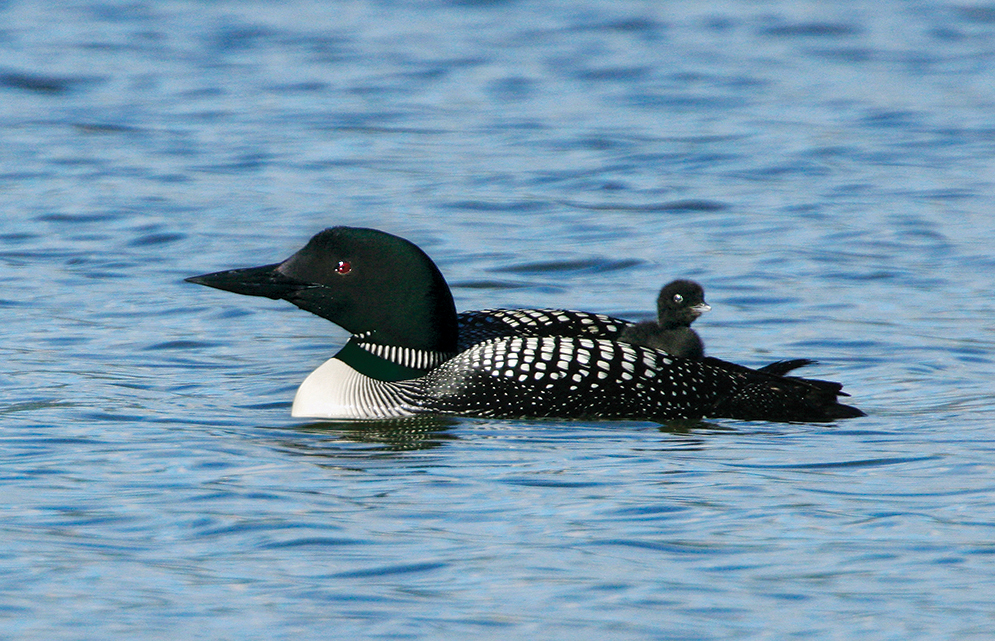 No top 10 list of Canadian birds would be complete without the common loon. While it is the official bird of our largest province, Ontario, it is also found in lakes right across the country. Its iconic soulful wail, sometimes punctuated by maniacal laughter, in the middle of a starry night is known to many in cottage country. With its striking black-and-white coat of feathers contrasting with a demonic red eye, the common loon prefers to nest right along the water’s edge in a concave bed of detritus and grasses. They can stay underwater for several minutes, which helps them to make their living catching various kinds of fish.

Where to find it: Breeds on the shores of lakes across North America. From April to June, watch for downy chicks hitching a ride on their parents’ backs.

What to look for: Iconic black and white checkerboard pattern on back, iridescent green head and neck, white lines on side of neck.

Not to be confused with: Its closest relative, the yellow-billed loon, which has a large, whitish or yellow bill and a larger checkered back pattern. 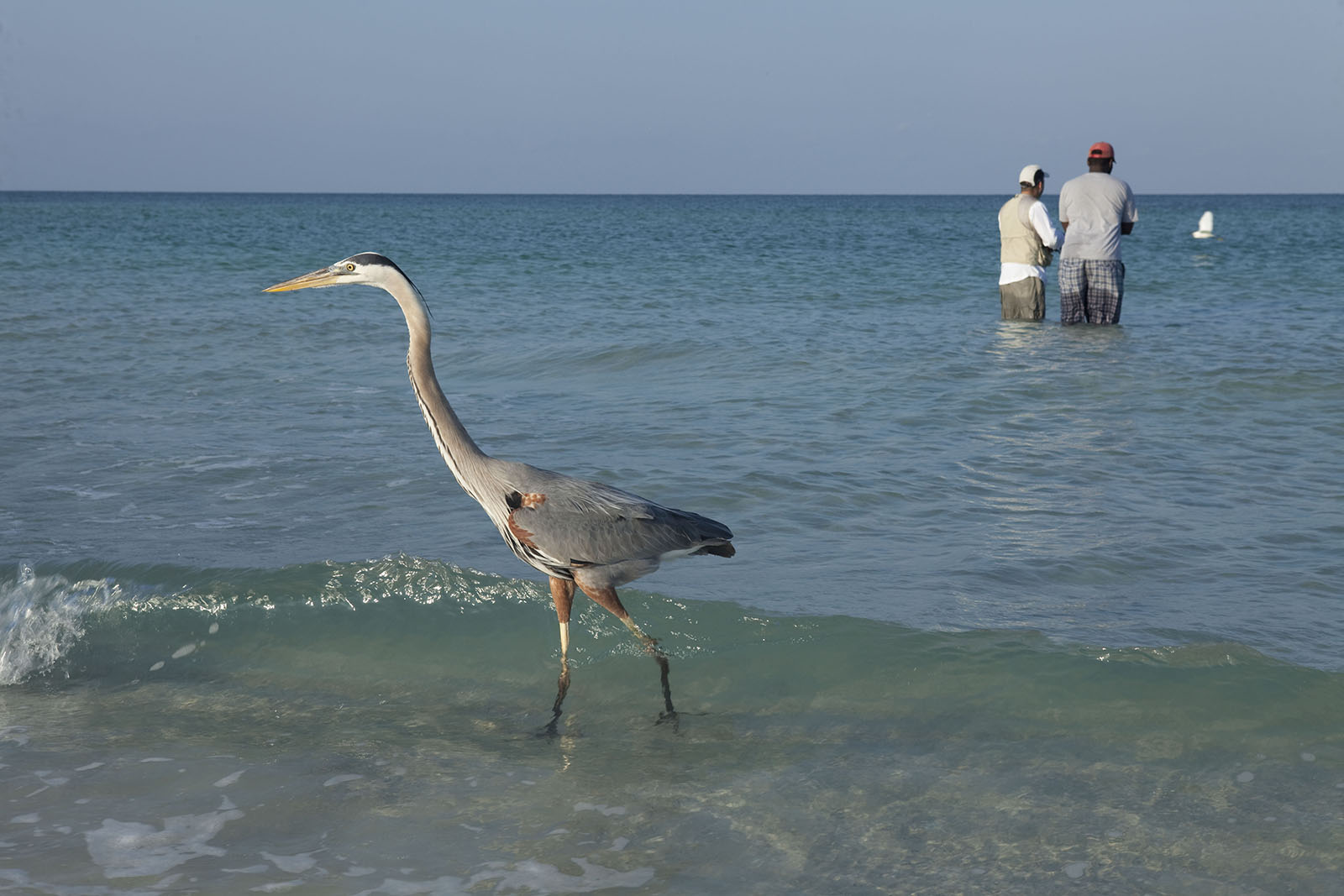 Here is an easy bird to find, not only because it is large and easy to identify, but because it frequents virtually any kind of body of water across southern Canada, ranging from the seaside to sewage lagoons, farmers’ fields to roadside ditches. A long-legged bird with a neck to match, the great blue heron can stand still seemingly for hours watching for unwary prey. In the summer, in coastal provinces like Prince Edward Island and British Columbia, it is not uncommon to see 50 or 60 herons spread out across the tidal flats, hunting for small fish and other aquatic organisms.

Where to find it: Wetlands, marshes, lake and river edges and coastal areas across southern Canada and the U.S.

What to look for: A distinctive blue-grey body, a grey S-shaped neck with shaggy plumes, and a white face with a dark blue blaze above each eye.

Not to be confused with: The tricolored heron, which is smaller overall with a dark bill and white underparts. Normally found in the southern U.S., Mexico, Central and South America, tricolored herons have been known to occasionally find their way to the Canadian Maritimes. 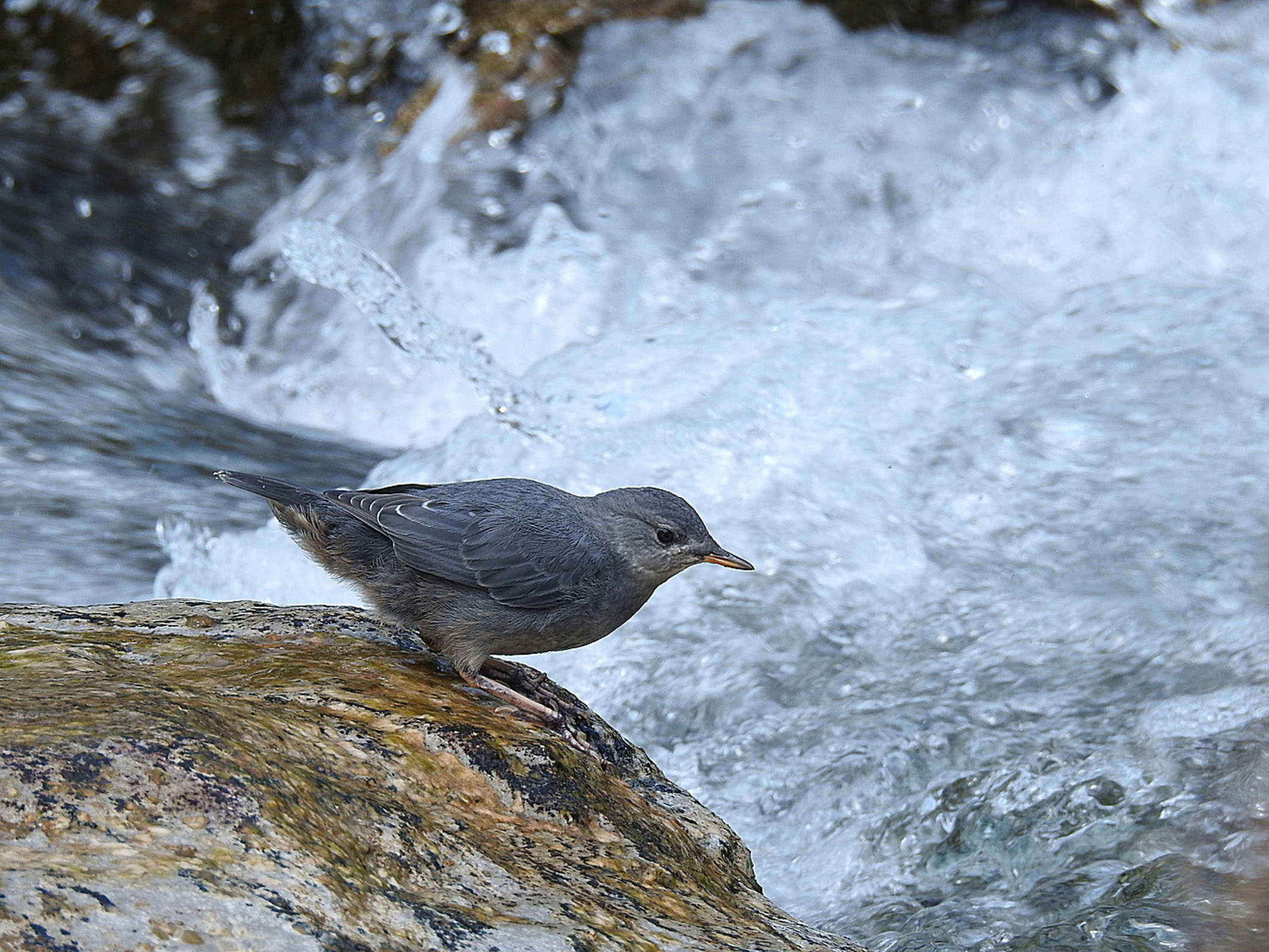 You will have to travel west to see my favourite songbird in Canada. The American dipper is only found in British Columbia, Yukon and southwestern Alberta. It too frequents aquatic habitats, but much different from those of the herons. Fast-flowing, cold trout streams are really the only place you will see a dipper. Often seen bouncing up and down on its two legs while standing on a rock in the stream, this wee grey bird loves to immerse itself under the water in search of stonefly nymphs among the round rocks. They build their nests on ledges on the undersides of bridges spanning rivers, but also in cavities in the riverbanks and even in supplied nest boxes.

Where to find it: Cold, fast-moving streams and rivers in British Columbia, Yukon and the Alberta Rockies.

What to look for: Adults are dark grey overall, with sturdy pink legs, a straight black bill and short, rounded wings.

What to listen for: Their call is a harsh bzzt, given singly or in rapid series; their song is a loud, disorganized series of warbles, whistles and trills. 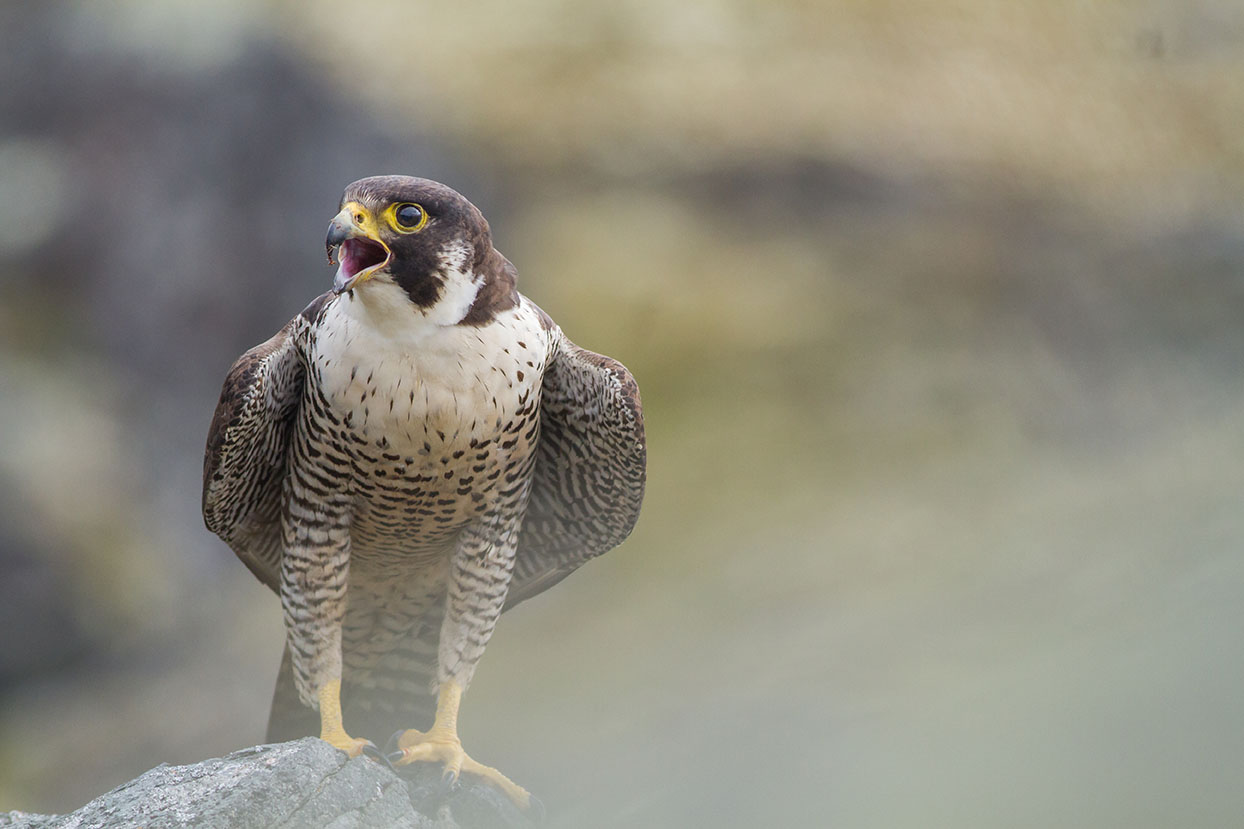 If you want to see this amazing aviator, capable of diving at speeds of up to 320 kilometres an hour, you only have to travel to the nearest large city — Halifax, Montreal, Toronto, Winnipeg, Edmonton, etc. — and look upward onto the ledges and windowsills of skyscrapers, which emulate the natural cliffs that peregrine falcons traditionally nest upon. Hunting mostly pigeons and migratory birds, this falcon was almost lost to the world when its populations were decimated by the rampant use of toxic organochlorine pesticides such as DDT. The banning of those chemicals, coupled with captive breeding and release programs, have brought them back in numbers higher than historical levels. While they often overwinter in large cities, your best time to see them and hear their raucous calls is from May through July.

Where to find it: In large cities, nesting on and hunting from the ledges of tall buildings, or in the steep cliffs of seacoasts.

What to look for: Adults have bluish-grey wings and light underparts with dark horizontal barring. Like all true falcons, they have a pointed “tooth” on their upper beak, which they use to bite their prey.

Not to be confused with: The gyrfalcon, which is larger and stockier, with a longer tail, or the prairie falcon, which has a lighter head colour and sandy brown underparts. 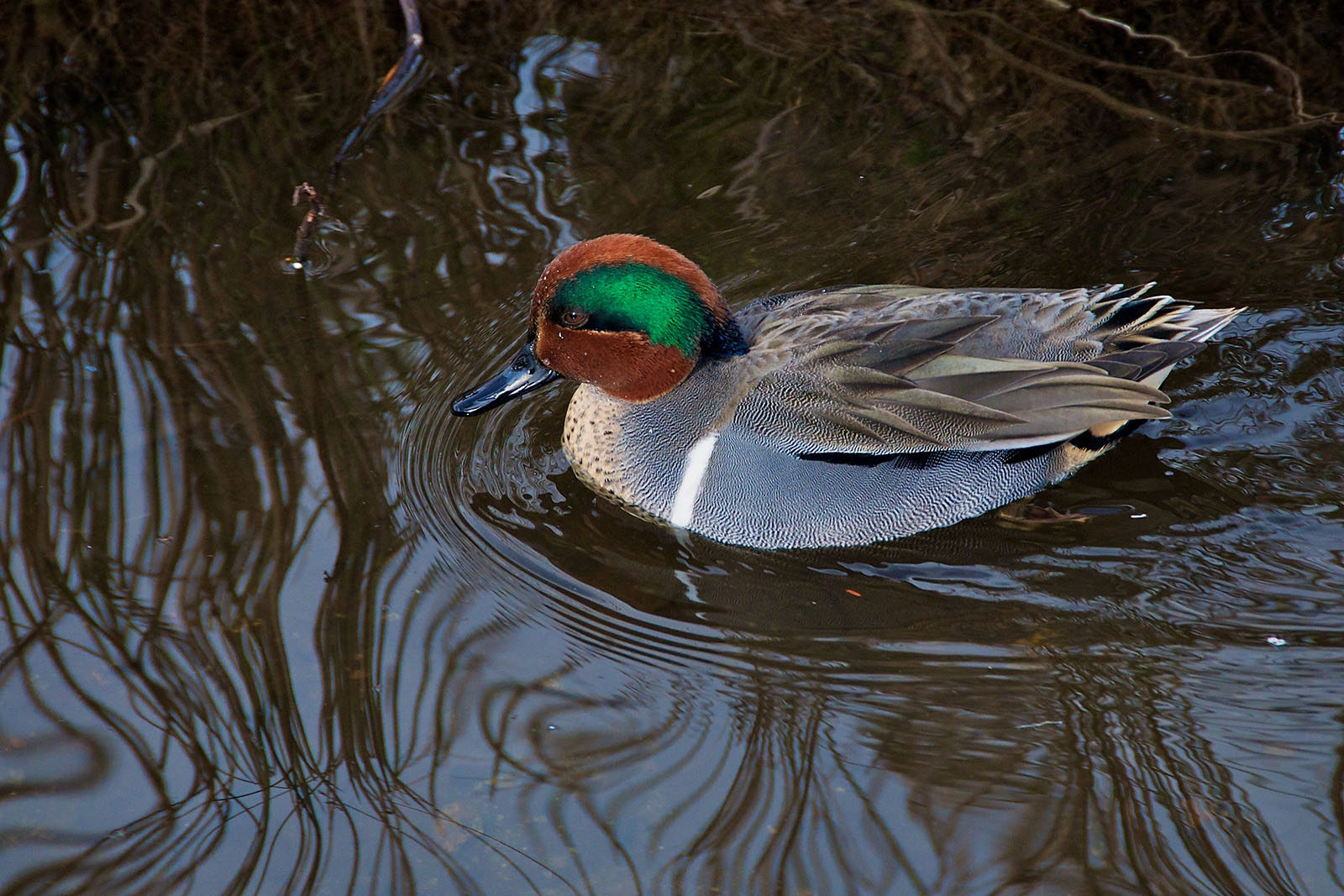 I have two favourite duck species, but you will have a much better chance of seeing a green-winged teal than a harlequin duck. Also, green-winged teals are easily as breathtaking to see as harlequins, especially males with their contrasting deep rust and forest green plumage. Found in marshy wetlands and mudflats in every province and belonging to the group of ducks known as dabblers, these little ducks love to tip over into the water with their rumps in the air, feeding upon aquatic invertebrates and seeds. They are exceedingly fast fliers, especially when a peregrine falcon is chasing them!

Where to find it: Around ponds in deciduous woodlands or shallow wetlands with plenty of vegetation.

Not to be confused with: The blue-winged teal, which is larger overall and has a different wing pattern. 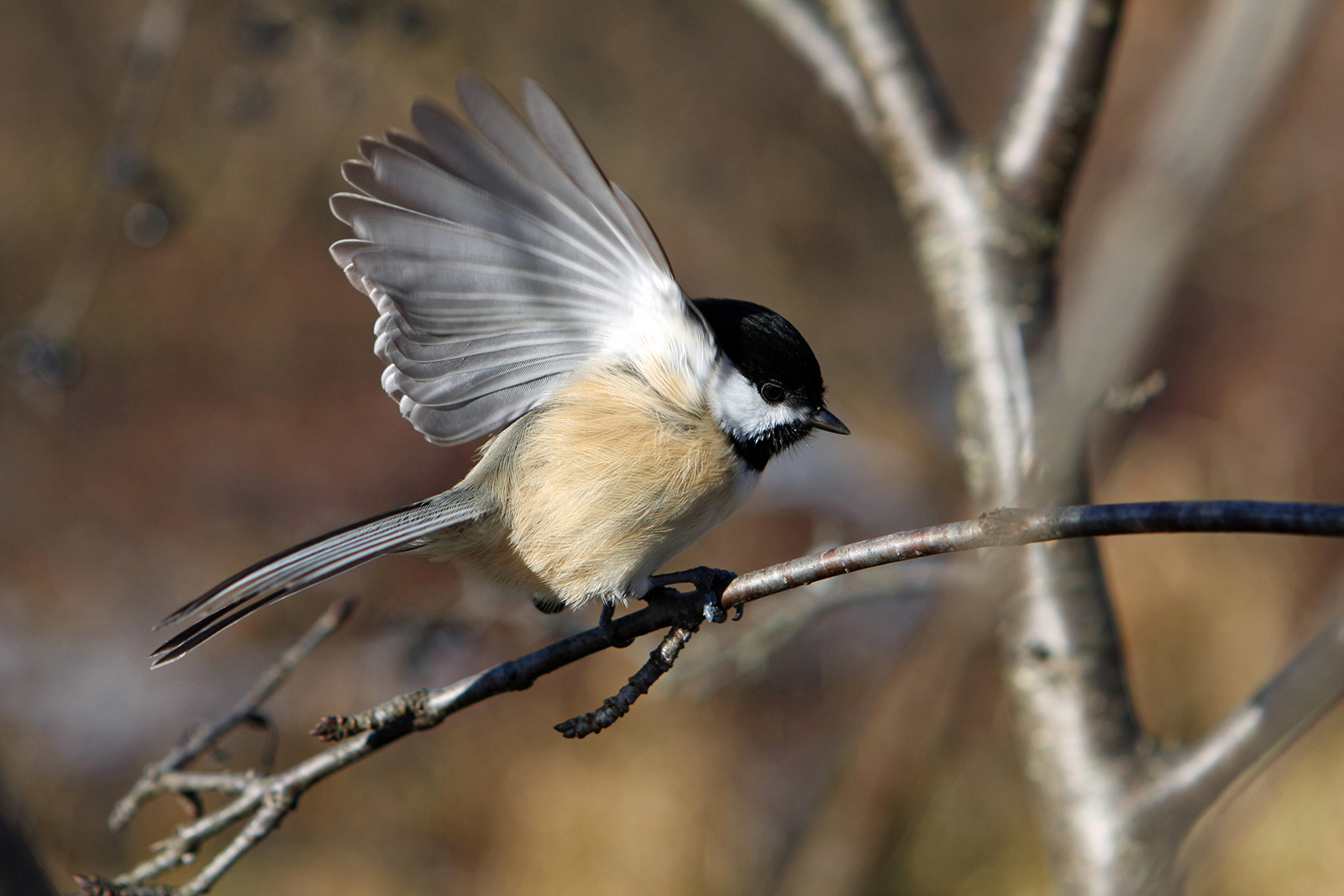 Another top entry on anyone’s Canadian birding list has to be the black-capped chickadee. Found from coast to coast in all kinds of forest habitat but also highly prevalent at our backyard feeders, the official bird of New Brunswick is a friendly, trusting little tyke that will actually land on your hand to take a sunflower seed or piece of dog kibble. They are known not only for their ability to store seeds for the winter, but also their remarkable memories, which can recall the locations of their cached food items.

Where to find it: A wide variety of wooded habitats, from wild forests to suburban parkland.

What to look for: A tiny bird with faded buff-coloured flanks, white-edged wing feathers, bright white cheeks and a distinctive black cap and bib.

What to listen for: Their call is a raspy tsick-a-dee-dee-dee that will be familiar to anyone who’s spent time outdoors in the summer. Their song is a loud, clear bee-bee-be with the first note higher in pitch (also sounds a bit like cheese-burger). 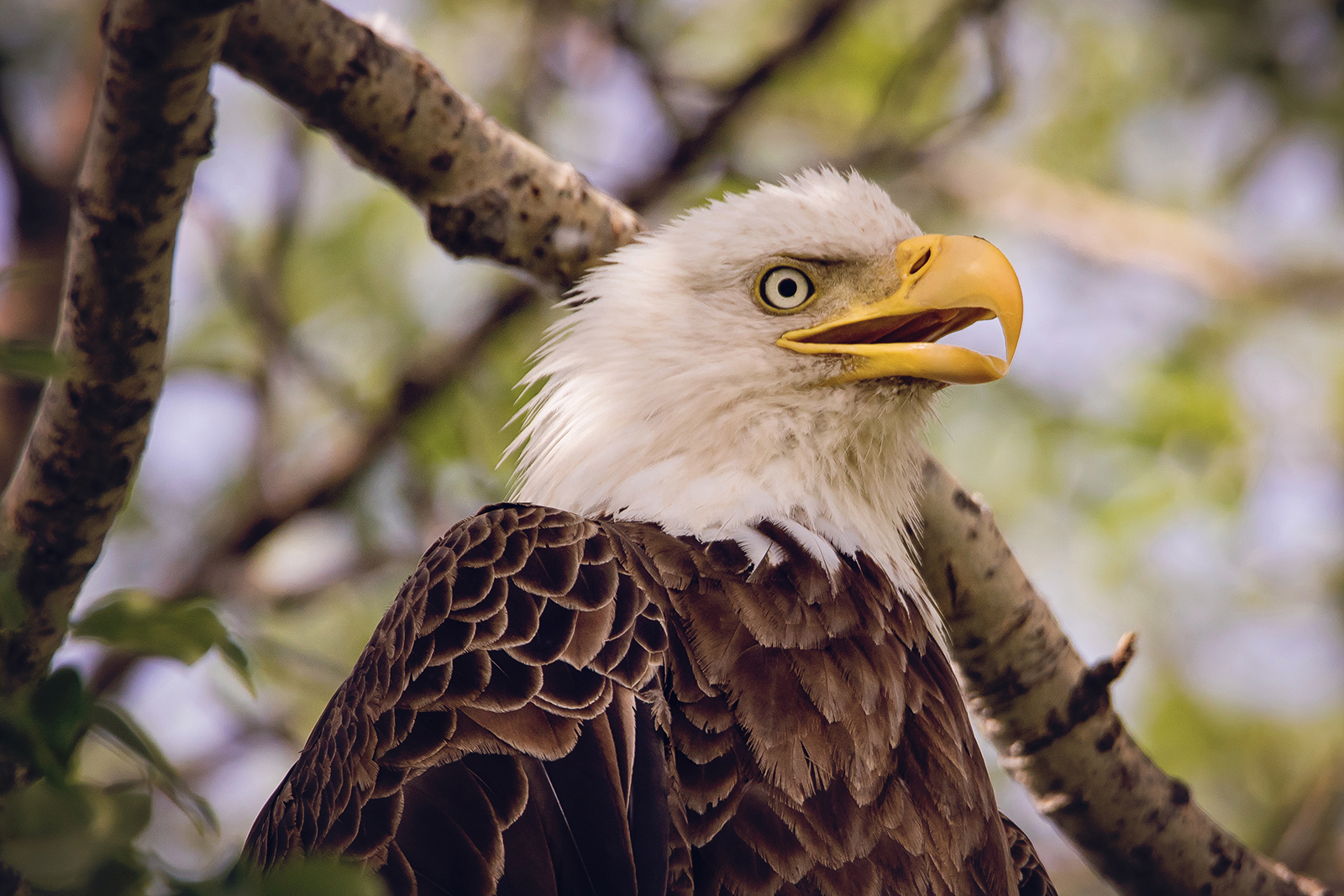 Back to the big birds. The bald eagle, which can be seen from coast to coast in Canada, is another bird that we almost lost to organochlorine chemicals. However, they are now back in great numbers in some parts of the country, particularly the east and west coasts. Often found near large bodies of water, but also nesting in tall trees even in suburban neighbourhoods, it takes these dark brown eagles about five years to develop the distinctive white heads and tails that signal sexual maturity. These consumers of primarily carrion are not shy and are known to steal fish from ospreys.

Where to find it: Breeds in forested areas near water and along shorelines, even with human activity nearby.

What to look for: Very young juveniles (one year or less) are dark brown all over; by four years of age, they have begun to develop white heads. Adults have a pure white head, a long, wedge-shaped white tail, yellow feet and legs, and a yellow, hooked bill.

Not to be confused with: Golden eagles, which are found primarily in northwestern Canada and have golden brown feathers on their long necks. 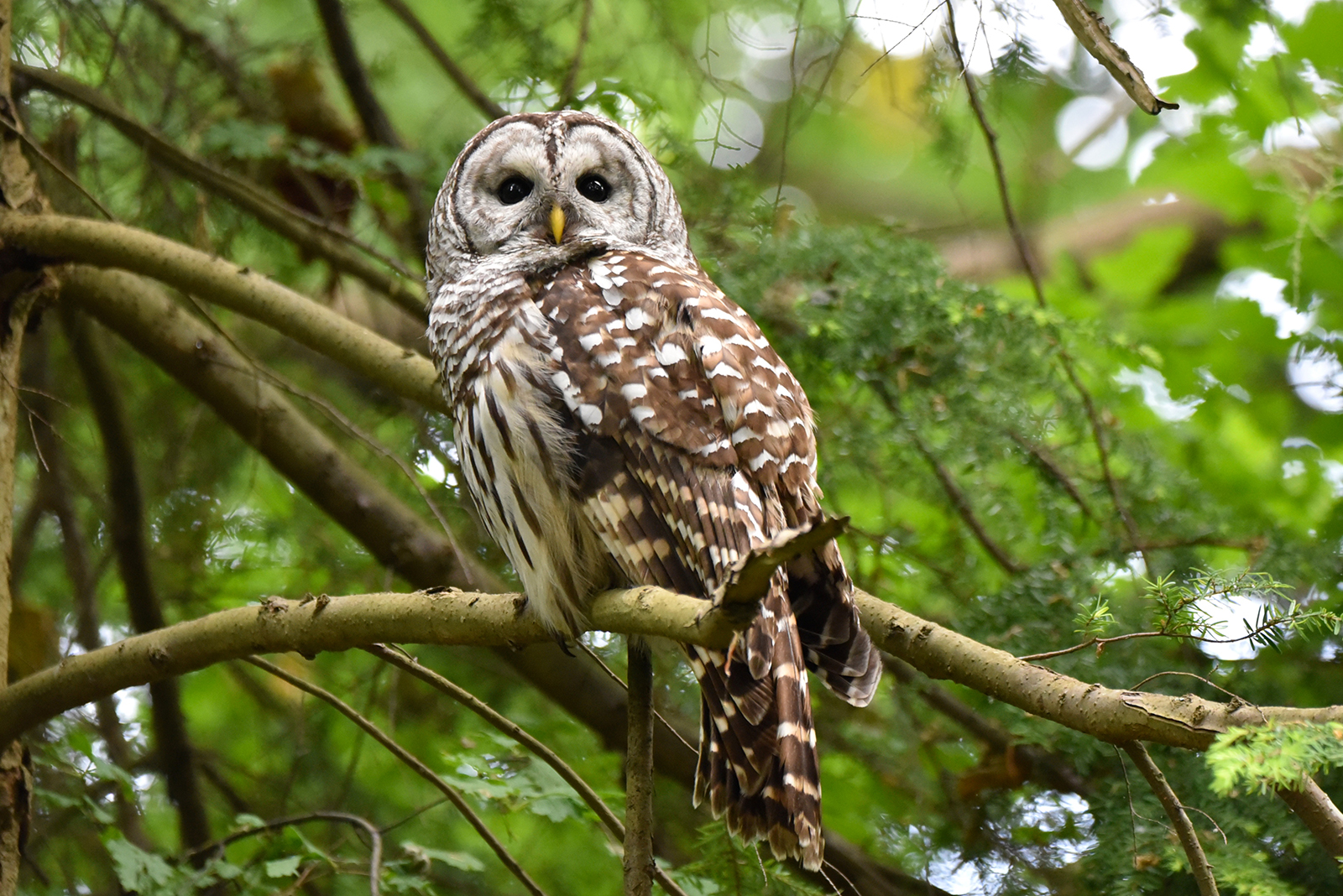 I have simply got to include a “bird of the night” in my list, if only to induce you to try looking and listening for birds in the dark evenings. I could choose one of several owls, big and small, but the easiest one for you to hear and recognize is the barred owl. Standing just over a foot high, with barring on its chest and streaking on its belly, this greyish-brown owl lacks the feathery ear tufts seen on the similarly-sized great horned owls. Found in suburban environments in most provinces, barred owls can be identified by their hooting calls in early summer.

Where to find it: A variety of wooded habitats across North America. Widespread in British Columbia and the Maritimes.

What to look for: Brown barring on breast and tail, brown streaking on belly, dark eyes and a conspicuously yellowish bill. 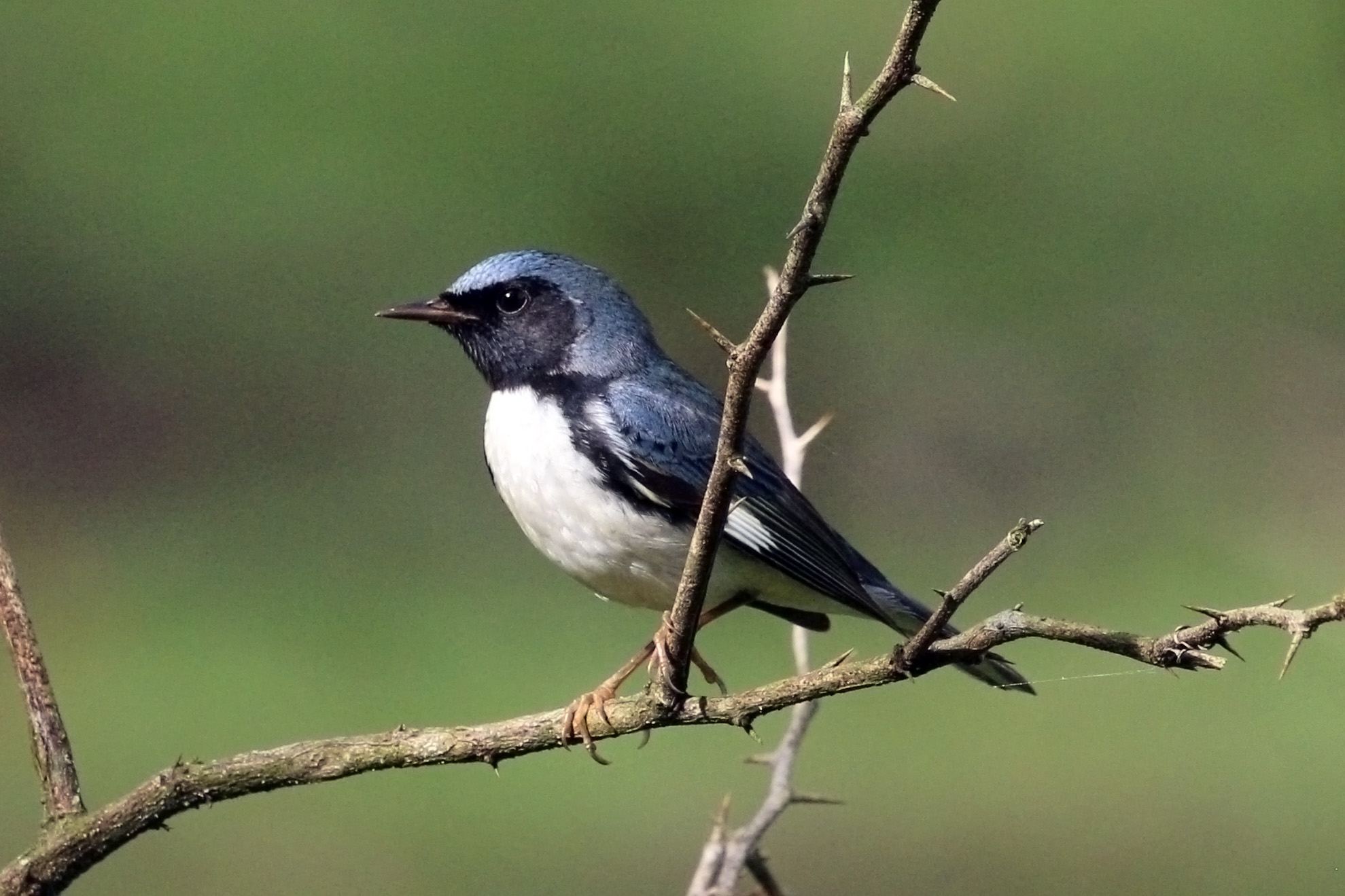 Last but not least, my favourite warbler of all is the black-throated blue warbler, mainly because I love the slate-blue colour contrasting with the white underparts and extended black mask on the males. You will have to look a little harder for this small bird in its breeding habitat of deciduous and mixed forests, but the good news is that they often can be seen foraging for insects in the lower canopy and in shrubs. The black-throated blue warbler was among the first of the songbirds to demonstrate that sometimes birds can “divorce” and be seen breeding with a new mate not far from the previous year’s one.

Where to find it: In relatively undisturbed deciduous and mixed forests from southern Ontario and Quebec to the Maritimes.

What to look for: Males have distinctive dark blue upperparts, which contrast with their white belly and black mask and throat. Females are olive-coloured with a pale eyebrow and partial eye ring (undereye only). 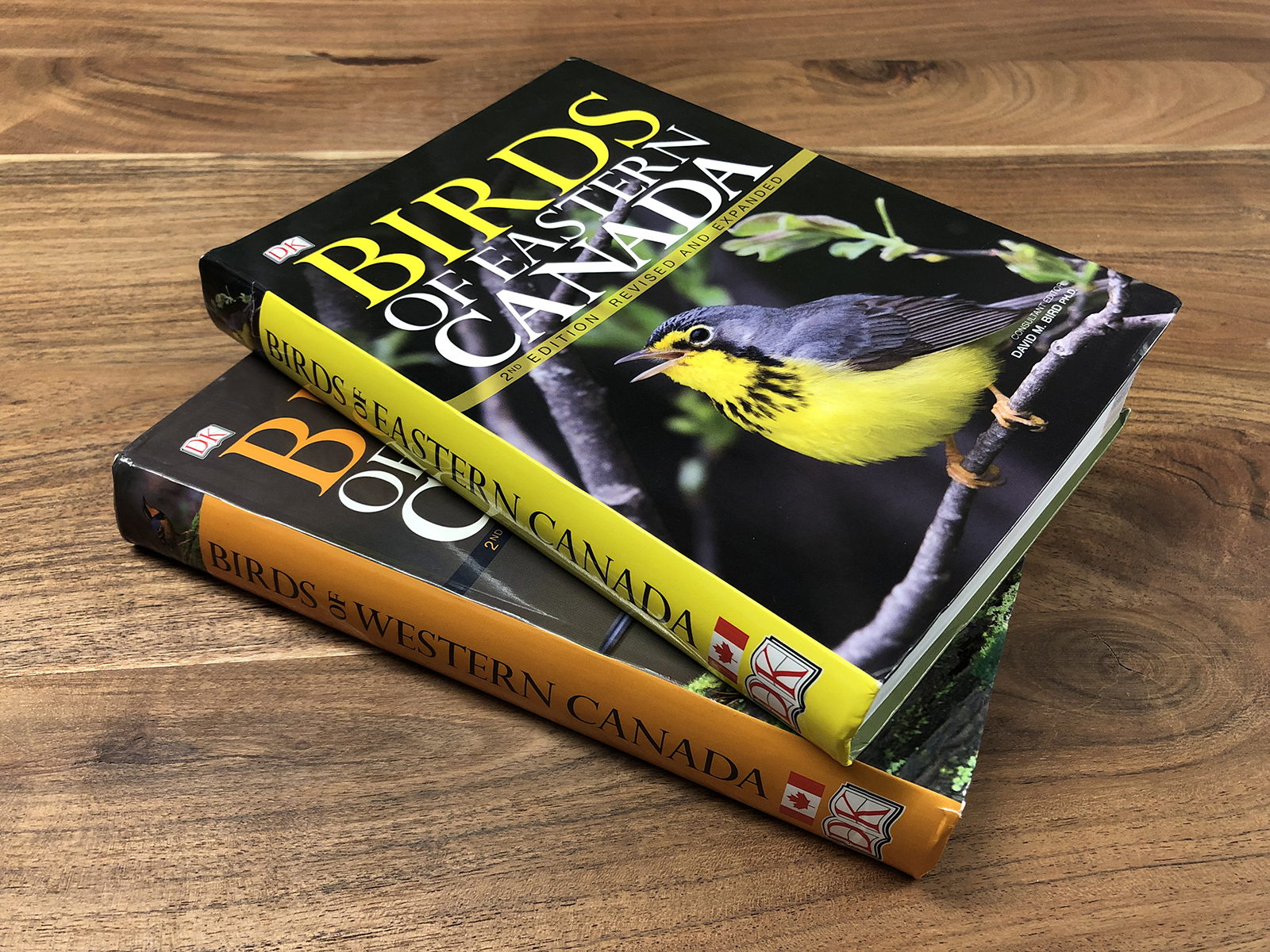 Want to win a set of Birds of Canada reference books? Like Canadian Geographic on Facebook and watch for a giveaway coming soon!

David M. Bird is Emeritus Professor of Wildlife Biology and former director of the Avian Science and Conservation Centre at McGill University in Montreal. Dr. Bird is a regular columnist for both Bird Watcher’s Digest and Canadian Wildlife. He is the author of several books and over 200 scientific publications. He is the consultant editor for DK’s Pocket Birds of Canada, Birds of Eastern Canada and Birds of Western Canada.