With plumes of soot billowing from exhaust pipes and a torrent of brown wastewater left in their wake, ships haven’t always had the greatest reputations regarding the health of the world’s oceans. But not the Yersin. The Monaco Explorations yacht takes environmental friendliness to new heights.

In July, the ship departed on a three-year journey around the globe to conduct marine research while raising awareness for oceanic plights. For this round-the-world journey, the 76-meter vessel is outfitted with six research laboratories and the latest in technological equipment.

The Monaco Explorations expedition was initiated by Prince Albert II of Monaco who carries on a strong family legacy of oceanography, and from its inception, Francois Fiat, the ship’s owner, required the vessel to be an environmental champion.

Jean Dumarais, the captain of the Yersin, says that the ship reduces its environmental impact in as many ways possible. Not only is the ship on a global mission to “reconnect humanity with the sea,” the vessel itself integrates the most innovative of eco-friendly technology. The ship’s motto is “Leave an imprint without leaving a trace.”

Here’s some of the features that make the Yersin the greenest ship in the sea:

Read an interview with Prince Albert II of Monaco in the September/October issue of Canadian Geographic.
Advertisement 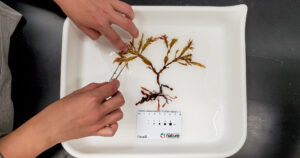