Where is the solar max?

This year’s solar maximum may be the minimum maximum of the century.

Every 11 years or so, there is a peak in solar activity, such as sun spots, flares and solar winds. For the past eight years, scientists have predicted 2013 to be the maximum of the current solar cycle, but the number of sunspots during these peaks can vary.

New evidence suggests this solar maximum could actually have two split peaks, both of which are less intense than average. In that case, a NASA scientist has predicted that the next peak will occur in about two years. But as Ljubomir Nikolic — a research scientist at Natural Resources Canada’s Geomagnetic Laboratory — explains, it is impossible to predict the sun’s behaviour.

“What actually happens depends on the sun, not on our prediction,” he says.

According to Nikolic, the frequency of sunspots is somewhat irrelevant anyway. It’s not the number of sunspots that matters, he says, but how big they are, where they are and their magnetic complexity that really counts.

“The frequency of the solar storms could be lower, but this does not mean that their potential impact on Earth is lower,” Nikolic says.

It’s “geoeffectiveness,” or how the sunspots affect our planet, that really matters for scientists like Nikolic. Sunspots are manifested on Earth in a few ways; the blasts of radiation they give off can interfere with satellites or even knock out power grids as they rush past our planet. But their bursts of energy are best known for their most welcome effect: the aurora borealis, or northern lights. In years of a solar maximum, the northern lights are usually at their most frequent and most spectacular, and sky-watchers flock to remote polar areas to enjoy the show.

This year’s predicted maximum, according to a NASA report released on May 1st, is 66, or just slightly more than the 1906 maximum. It’s the 1906 number that NASA scientists have based the double-peak scenario on (solar cycles have sometimes mirrored previous patterns). In the new report, NASA has predicted that the current maximum will come this fall, and another weak maximum could occur in 2015.

As Nikolic stresses, however, solar cycles are not an easy thing to predict. And even if we have passed the peak, it isn’t necessarily bad news for aurora viewers.

“Solar flares can happen at any time in the solar cycle. In fact some of the most geoeffective solar storms have occurred after the solar maximum.” 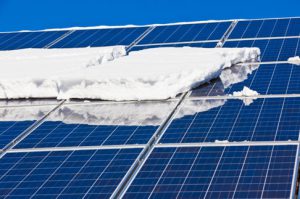 Solar panels for all seasons

Do solar panels work in places that get cold weather and snow? Absolutely.