I want to go back in time so that I can court Mary Dyer!” proclaims tour guide Brian Burgess, sounding like Sid, the goofball sloth from the Ice Age movies. Dyer, the Quaker who refused to accept the Puritan decree that men’s souls were more valuable than women’s, was hanged from the Great Elm in Boston Common in 1660.

My Boston tour began at the Common, where the wiry young Irish-Catholic Burgess sang for his supper. Actually, it was closer to shouting, but in a good way. He was being theatrical, informative and amusing for a gaggle of tourists following his city’s fabled Freedom Trail, which I had never explored before. I’d been to Boston several times for business or social reasons, but never just to soak up its history. In light of the city’s resilience after the marathon bombing, exploring the city’s past is worth a trip.

From the Common itself, founded in 1634 as a place to gather, graze sheep, stage militia drills, bury paupers and hang heretics from the Great Elm, to the Old State House a few blocks away where Samuel Adams and his fellow Sons of Liberty incited the Tea Party in 1773, the trail reminds you of what made American democracy so daring and principled.

“I love Sam Adams!” shouts Burgess as we stand near Adams’ faded tomb in a centuries-old cemetery hemmed in by modern office buildings. “He was wicked genius! He was the agitator, the propagandist, the spin doctor, the mouth of the Revolution!”

After walking us around the historic soul of Boston for two hours, Burgess more than earns his tips, which is what he works solely for — with an innovative American collective of storytellers called “Free Tours by Foot.” (You can also join them in New York, New Orleans and Washington, D.C., among other cities.) The tour ends at Faneuil Hall — now home to a cornucopia of innovative food stalls (see “Street eats” sidebar) — built by Peter Faneuil, Boston’s wealthiest bachelor in 1742.

Following the tour, I stop at another wealthy Bostonian’s landmark building, famed art collector Isabella Gardner’s stunning museum, which has just been revamped. The Isabella Stewart Gardner Museum sits a stone’s throw from Boston’s sprawling and impressive Museum of Fine Arts, but proves a much more powerful art-going experience. This was Gardner’s personal assemblage of Titians, Raphaels, Vermeers, even Rembrandts, which she acquired travelling across the world after the death of her only son in the 1860s. Rather poignantly, images of Madonna and child abound in her collection. On the ground floor of the four-storey museum, which Gardner modelled after a Venetian palace with a serene interior courtyard, is a chapel featuring a dead knight. Gardner asked to be laid in state just outside the chapel when she died at the age of 84. Grief infuses this collection of wonderful art; it speaks to the wounded soul.

I also visit the library bearing the name of another great female of Boston’s past, Mary Baker Eddy, who founded the medicine-averse sect Christian Science, its reading rooms and, at the age of 87, its excellent newspaper. The library — a quick cab ride from the Gardner and the Museum of Fine Arts — includes the Mapparium, a three-storey stained glass globe, which you can stand inside, agape, as if at the centre of the world.

Having walked to the point of exhaustion, I check into the Copley Square Hotel, which dates back to 1891. It was the first hotel to open in Boston’s Back Bay neighbourhood. Now being refurbished, the Copley Square is sleek yet comfortable, and central to the city’s bustle. At the time, they were in the process of resurrecting their legendary basement jazz club, Storyville, which once hosted Billie Holiday and Ella Fitzgerald, and will now also feature excellent food. Or, so goes the plan. In the meantime I die and go to heaven at a Zagat-rated Boston venue called the Franklin Café, which features mouth-watering American cuisine. I sit at the bar, savouring confit of chicken thigh with corn bread while reading Moby Dick.

This oldest of American cities has a talent for keeping things fresh without losing sight of beginnings.

There’s a bit of adventure in getting to Nantucket, the famed 19th-century island whaling community turned well-heeled resort town off Massachusetts’ coast, by air. From Boston’s Logan Airport you board a plane that’s roughly the size of a Cinnabon, and judder out across the Atlantic for 45 minutes before landing at Nantucket’s cedarshingled airport.

When I see Cape Air’s tarmac personnel fit a fellow passenger’s suit bag into a pocket on the plane’s wing, I almost bolt for a car rental agency so that I can drive down to Hyannis and board a ferry, but expediency overcomes cowardice. I keep my eyes shut for the duration, and miss seeing the crescent-shaped island, as well as its cousins, Martha’s Vineyard and Cape Cod. I also miss any chance of spying a sperm whale heaving out of the deep.

What I don’t see upon arrival are hordes of tourists, for Nantucket quiets dramatically in autumn, leaving you to enjoy beach walks and 48 kilometres of cycling paths with scarcely a soul in sight, but for the odd playful grey seal. The “year-rounders,” as Nantucket residents call themselves, largely inhabit the mid-island, virtually shuttering the elegant, cobblestoned downtown near the ferry harbour just after Halloween. When merchants amassed fortunes in the early 19th century by harvesting and refining whale oil, they built the gorgeous town core.

For a time, Nantucket’s wealth was extraordinary, but its ticket to affluence also engendered a unique culture. Most men went whaling for three to five years at a time, leaving behind them an island of women who ran all the businesses and conducted the governance. Meanwhile, because the men had so much downtime while they bobbed up and down at sea in pursuit of their quarry, they became the basket weavers and embroiderers, decorating whalebone corsets and other parlour trinkets for their ladies.

You can explore Nantucket’s rich history at the Whaling Museum, which is by far the most interesting destination in town if you don’t feel like shopping for cashmere, candy and antiques. Regardless, Nantucket’s past and present are an interesting contrast: its culture, so well-preserved in its museum and in hundreds of cedar-shingled houses all over the island with names such as Abi-Gale and Nickanoose, has otherwise been displaced by resort culture. When the whaling industry collapsed in the 1850s, the town population shrank from 10,000 to 4,000. After that, it was gradually built up again by affluent Bostonians seeking summer homes and has, in recent years, become a destination of the very rich.

What remains constant is the sheer beauty of the island, with its sweeping seagrass and flourishing bird life. The Wauwinet, a 32-room hotel 13 kilometres out of town, offers a glimpse of the island’s natural environment. A getaway made in heaven, for honeymoons or anniversaries or just time away from toil, the beautifully appointed yet cosy inn lies on a narrow peninsula between Nantucket Sound and the open Atlantic, with views of the sunset from its grassy lawns.

In the autumn, after a long walk in windy silence, you can sit in the fire-warmed library decorated with charming Americana antiques, and sample complimentary port and cheese. There’s a low-key spa, free bicycles and shuttles to town and a splendid restaurant named Topper’s, after the owner’s dog. It serves some of the best food I’ve ever had — an appetizer of foie gras on savoury French toast, followed by sous vide short ribs with pears and traditional Nantucket “brown bread” made with molasses.

Nantucket is the Wampanoag American Indian name for “the faraway land,” and when you sit on the Atlantic shore, between cranberry bogs and scalloping boats, watching seals beneath a searingly blue October sky, you feel dreamily faraway indeed. It makes the nerve-racking voyage to the island getaway well worth the effort.

If Boston’s vibrancy once lay in its politics, now you’ll also find it in its amazing street food. I ordered Mac and Cheese with a custom topping — lobster — but could as easily have ordered from one of the city’s more gourmet food trucks, which are substituting hot dogs for haddock with red pepper aioli, global fusion barbecue and organic vegetarian soups. The weekend I visited, there’d been a food-truck smackdown between Boston and New York vendors. You could eat from trucks throughout your stay without feeling malnourished. If you prefer to sit down and soak up ambiance, however, the Union Oyster House — Boston’s oldest restaurant — would be a fitting destination after the Freedom Trail, as it’s only a block away from Faneuil Hall. 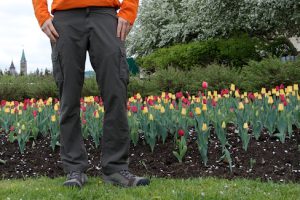 What’s the price of peace of mind? A look at a pair of Pickpocket Proof Pants