The kelp forests rippling beneath the ocean surface off the coast of Nova Scotia were once among the world’s most productive ecosystems. But over the past three decades warming waters have decimated this crucial underwater habitat, threatening the many species that depend on it.

Once-luxurious kelp beds have shrunk by 85 to 99 per cent along more than 100 kilometres of Nova Scotia coastline over approximately the last half century, says Karen Filbee-Dexter, a researcher at Dalhousie University. These coral-reefs-of-the-North been replaced by sprawling mats of turf-forming and invasive algae.

Kelp needs cold water to flourish and is particularly susceptible to temperature change. Unfortunately for the kelp, the Atlantic coast of Nova Scotia is one of 24 globally-identified ocean warming hotspots; for the past 35 years the sea water’s been warming .06 degrees celsius each summer. The worst kelp losses have been recorded in protected areas like St. Margaret’s Bay and Mahone Bay.

“A healthy kelp bed is one of the most beautiful things in the world. And when something like this is happening in your backyard, it’s sad,” says Filbee-Dexter, who grew up in St. Margaret’s Bay. “Especially when a lot of people never even bother to look below the water’s surface.”

Although Filbee-Dexter concedes that local anthropogenic stressors (e.g. overfishing, pollution and species introduction) could be playing a small part in the decline, she notes in the study (published this year in the Marine Ecology Progress Series) that unlike other more populated coastlines, Nova Scotia is largely undeveloped and that the culprit is most likely warming waters.

This is what the kelp has become in the warmest parts of the Nova Scotia coast. The turf-dominated reef is less 3 dimensional, so provides much less habitat for fish and small invertebrates. Photo taken in St. Margarets Bay, Nova Scotia by Filbee-Dexter’s supervisor Robert Scheibling in 2013. (Photo: Robert Scheibling) 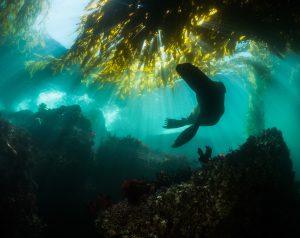