Though the lynx is often referred to as one of Canada’s most elusive creatures, a family that resides in Banff National Park is leading the public to think otherwise. Alex Taylor, a human-wildlife conflict specialist in Banff, Yoho and Kootenay national parks, was recently called out to Deer Lodge in the Lake Louise area when park visitors spotted the mother and her kitten yet again.

The pair has made news across Canada and has already drawn in thousands of views on YouTube following their last appearance in January, along the highway in Banff National Park. The park is known for its picturesque landscapes and variety of wildlife, such as the fearless elk that wander about town grazing.

“This is a great example of Parks Canada working with the public to help keep our wildlife safe while also sharing a really neat story,” said Rick Kubian, Parks Canada Resource Conservation Manager for the Lake Louise area. “We received a call from Deer Lodge saying that a lynx was acting strangely next to their building, which prompted a quick response from our staff member.”

The mother lynx sat unmoving in front of Deer Lodge’s ground floor windows, staring at her own reflection for nearly thirty minutes. Guests inside the lodge were instructed to remain indoors until Taylor could arrive on site to determine a course of action. Upon arriving, Taylor observed the mother for some time to assess whether her strange behavior was due to injury — it was not.

“I’m pretty sure we all had an incredible and rare viewing experience. It is possible the adult lynx saw in her own reflection another lynx that she thought may have presented some sort of a threat to her kitten and she wanted to keep an eye on it,” Taylor said.

Parks Canada actively protects wildlife across the country everyday with the help of their human-wildlife conflict specialists like Taylor. While you enjoy the video below, please keep in mind that wildlife are not meant to be fed or approached when exploring the many parks of Canada. If you do stumble upon an animal in its habitat, Parks Canada advises keeping a distance of at least 100 metres or staying in your car.

Though they might not be Lily the bear, or the Keiko the orca, these Canadian wildcats are well on their way to becoming virtual celebrities. Stay tuned to our blog, as we are sure this won’t be the last we see of this Canada lynx family. 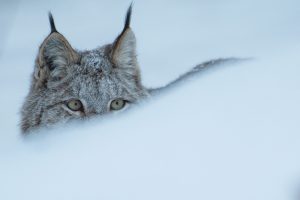