Using local knowledge to improve food security in the Arctic

It’s expensive to feed a family in the Arctic. The high cost of transporting goods from southern Canada means high prices in northern grocery stores, where a two-litre container of orange juice can cost $16. In regions where average incomes are low that’s a major problem. It’s also an intractable one. For decades, federal northern subsidy programs have devoted great effort and expense to making food affordable; but each day many northerners still struggle to provide their families with healthy, nutritious food.

Tiff-Annie Kenny, a University of Ottawa doctoral student who studies food security, is convinced that a solution can be found and that local knowledge is the key. Her partners in the Inuvialuit Settlement Region of the Northwest Territories concur. “Our goal is to find the easiest way to meet people’s nutritional needs in an affordable and culturally acceptable manner,” says Kenny. “First, we need to understand the real cost of food in the Arctic, and the best source is the people themselves. Usually, food-costing research takes an idealized basket of nutritious food and prices it. Instead, we’re doing participatory food-costing — finding out what people actually eat, how much they pay for it, and its quality.”

Kenny works with the Inuvialuit regional dietician and research assistants in the six Inuvialuit communities. In November 2014, she travelled to each community to train the assistants and accompany them while they visited stores to record prices. “Our community research assistants are often mothers of large families,” she says. “Not only are they experts on market [store-bought] food, they also know what equipment and supplies hunters need to harvest traditional food such as fish and caribou.”

“Market foods,” observes Kenny, “are a reality of day-to-day Arctic life, and the federal government spends a great deal of money subsidizing them. But local foods are also part of the equation. The quality of the meat in the stores can’t compare with the fresh, nutritious traditional food that hunters provide — and which cost a lot in terms of hunting equipment and supplies.”

In each community there are local factors that influence price. When the annual supply barge arrives, for instance, the prices of non-perishable foods drop. Then, as the supply diminishes and food has to be flown in, prices rise. In Inuvik, which is supplied by road, the opening and closing of the Dempster Highway during thaw and freeze-up has an effect. “Community research assistants decide when to check prices based on these local factors,” says Kenny.

The research assistants will be back in the stores in March 2015 for a second round of food costing, this time on their own. Working with these Inuvialuit mothers is a highlight for Kenny. “It’s impressive how much knowledge they hold,” she says, “and our research builds on that knowledge.”

The information Kenny and her Inuvialuit partners are gathering is an important contribution to the effort to build better food security and health in the north by improving food subsidy programs. It’s inspiring work, says Kenny: “This topic is important — it affects people every day. That’s an excellent motivator for doing a good job.” 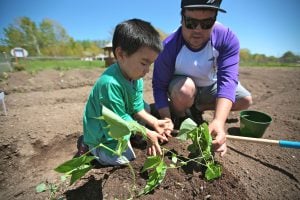