Let’s say you live in Flin Flon, Man. Or maybe Fort Vermilion, Alta. Or maybe even Whitehorse, Yukon. Would it surprise you to learn that you don’t actually live in the North? Well, not according to Chuck McNiven and Henry Puderer, anyway.

Instead, you live in an area called “North transition,” one of four regions the Statistics Canada geographers created (the others being “North,” “South transition” and “South”) in an attempt to determine exactly where Canada’s North is.

“To solve this cartographic brain teaser,” Mary Vincent wrote in the September/October 2000 Canadian Geographic story that explained McNiven and Puderer’s work, the two men “defined ‘northness’ using 16 characteristics, such as how often you have to flick on the furnace; the limits of permafrost, boreal forest, railways and all-season roads; number of agricultural growing days; climate; and accessibility to urban centres.”

The conclusion Vincent draws might cheer those who live in the North but discourage North transitioners, to coin an appellation for residents of that region. “And in Canada, it seems, it’s better to be on top of the country than in the middle. The North has huge hydroelectric facilities in Labrador and Quebec, extensive mining and jobs in territorial capitals and is less reliant on government sources of personal income than is any other part of the country. The North transition zone, on the other hand, emerges as Canada’s hidden have-not region, an area with few resources or urban centres.” 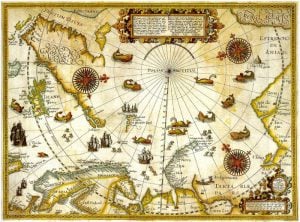 10 fascinating historic maps of the Arctic