The Canadian innovation that pulls drinking water out of thin air

And it was inspired by a lizard
By Dexter McMillan
Advertisement

More than two billion people live in countries affected by a lack of drinking water. Soon, a Canadian innovation — inspired by a biological adaptation found in certain lizard species — will make it possible for some of them to pull a glass of water right out of the air.

The company’s founder, Richard Boudreault, is a biochemistry professor at École Polytechnique in Montreal and a Fellow of The Royal Canadian Geographical Society. He says his product offers a solution to water shortages in countries around the world. His inspiration came from observing the Mediterranean nation of Malta, one of the most water-scarce countries in the world.

“It’s an island surrounded by water, but it’s sea water,” he says. “To generate potable water from it costs a lot of energy.”

The “awn” in the company’s name refers to tiny hairs found on some species of cactus that condense and collect water molecules in the air. The company’s high-tech cloth fibre (the integral component of their AWG), meanwhile, is specifically engineered to mimic absorption capabilities of the skin of thorny devil lizards, which pulls moisture from the environment into the lizard’s mouth. Each square metre of Boudreault’s textile can convert up to 12 litres of water per hour, depending on humidity.

Left to right: AWN Nanotech’s flexible nanotech textile absorbs water vapour from the atmosphere and converts it to liquid fresh water, which is collected in the device; an electron microscope image showing the carbon fibres attached to the “nano-treated” material; cactus awns (the company’s name inspiration), use a similar water-condensing adaptation to thrive in desert environments. (Photos: AWN Nanotech)

“We are mimicking — or biomimicking — techniques from different beings,” says Boudreault. “Cacti and lizards and other types of animals that have adapted to living in a very dry environment.”

Although Boudreault’s device is not the first to convert moisture in the air to water, he says his product is more energy efficient than that of competitors. Boudreault’s technology uses only 0.01 kWh of solar energy (about 15 per cent of what a standard lightbulb uses) to produce one litre of water, and the absorption process itself requires no energy at all. Overall, the process uses 20 to 70 times less energy than the next best condensation solutions on the market.

“We have a small fan that is propelled by solar energy,” explains Boudreault, “just to keep the amount of air flowing to a maximum on the membrane.”

This month, two AWG machines built by another Canadian company, SEI Logistics, were installed in First Nations communities in northern Canada, many of which are struggling with well-documented crises related to water quality and availability. True North Aid, a non-profit dedicated to improving life on First Nations communities, bought and installed the machines, which run on grid electricity.

“As a small charity, I can’t provide the big treatment plant that they ultimately need and should have,” says Ken Smid, national director of True North Aid. “This is just one small step in the direction of water security for northern community members.”

Smid admits that the energy costs associated with running their machines can be prohibitive. “The plan is that they’ll operate on solar power eventually, so they have been designed ultimately with that in mind.”

The minimal power required to operate AWN’s product addresses this problem, and Boudreault says the applications are extensive. He has had interest from countries such as Vietnam and Australia, who are looking to solve a variety of water crises, and potential clients in Saskatchewan are hoping his nanotextile can be used to clean water in the oil sands. He also says that like True North Aid, Indigenous Services Canada is interested in exploring his product as a way of improving access to clean water in First Nations communities across Canada.

Smid says that here in Canada, the technology is a stopgap measure until the government can fix the problem. “At the end of the day, everyone needs water,” he says. “The AWG unit really is there to restore not just dignity but to provide that basic human right.” 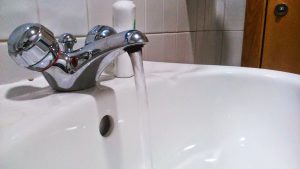