For nearly 80 years, a Second World War-era B-24 Liberator Bomber has rested at the bottom of Gander Lake, Newfoundland, where it crashed upon takeoff on Sept. 4, 1943, taking with it the four souls aboard. Seventy-nine years and one day later, an international team of divers supported by the Royal Canadian Geographical Society, the Shipwreck Preservation Society of Newfoundland and Labrador and Ocean Quest Adventures located and positively identified the wreck.

Dubbed “Liberator 589D,” the aircraft lies on a steep ledge nearly 50 metres below the surface in near-freezing temperatures (six degrees Celsius). At the time of the crash in 1943, search and salvage missions were conducted by military divers in hard hats but abandoned after the wreck slipped into deeper water.

“This is a very technical scuba dive because it’s deep and it’s in very dark water,” says Jill Heinerth, a diver on the expedition team and Explorer-in-Residence with the Royal Canadian Geographical Society. “We went down with cameras in really tough conditions to see if we could find anything that would give us positive confirmation.”

3D sonar scans made in July helped the team pinpoint the location of the aircraft. In a series of six dives, divers descended two at a time in dry suits while breathing Nitrox (enriched air) to search for markings that would confirm it was Liberator 589D. Some of the items located amid the wreckage included a turret gun with ammunition, landing gear and instruments from the aircraft. Covered in silt, the wreck itself was found upside-down on a slope in the tannic (dark, tea-coloured) water, which made the dive even more difficult.

Comprising more than a dozen divers and researchers, the effort to locate Liberator 589D is part of a broader RCGS-flagged project, the Great Island Expedition, which takes divers to various locations across Newfoundland to learn more about the island’s history and share stories of exploration.

Aboard the plane in 1943 were Wing Commander J.M. Young, who flew the aircraft, Squadron Leader John G. MacKenzie, Flying Officer V.E. Bill and Leading Aircraftman G. Ward. After an engine failed on takeoff, the aircraft made a slow turn and barrel rolled into Gander Lake, taking the four airmen to their deaths. The body of Squadron Leader MacKenzie was recovered in 1943, but the remaining three bodies stayed inside the aircraft as it slipped deeper into the lake.

Upon locating the aircraft, Heinerth says she experienced a mix of emotions. “It was exciting but also sobering,” she says. “It’s a war grave and so it’s sobering when you’re in a place like that and you realize this is where a very tragic accident occurred. We tried to be completely respectful and give the families, the descendants some comfort in knowing that the wreck is finally found.”

All images and video of the aircraft will be donated to the Shipwreck Preservation Society of Newfoundland and Labrador and to the Virtual Museum of Canada with the hope that deeper, meaningful outreach and education about the war era can occur.

“I think it’s really important to not forget these stories, for people to really dwell on the fact of what happened in those days,” says Heinerth, adding she has explored Second World War-era wrecks across the world. “The discoveries can shed some light on Canadian culture and history.”

Go with the tides, Acadian Coast & Bay of Fundy Isles with Jill Heinerth

Experience New Brunswick’s most fascinating natural phenomenon from the coastline at its highest and lowest tides with RCGS Explorer-in-Residence Jill Heinerth. “The Picture Province” boasts exceptional biodiversity and plenty of hidden gems waiting to be discovered. 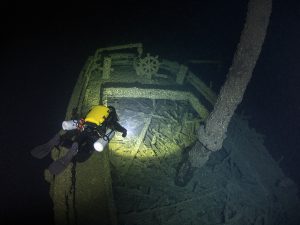 Exclusive photos: A first detailed look at the wreck of Canadian schooner Queen of the Lakes