Dr. Molly Shoichet is an expert in regenerative medicine, holds the Tier 1 Canada Research Chair in Tissue Engineering, teaches at the University of Toronto and is now Ontario’s first Chief Scientist. Appointed in November 2017, Dr. Shoichet is tasked with helping to better inform government decision-making, restore the public’s trust in government science and work to promote Ontario’s innovation economy, among other mandates. It’s a tall order, but here, the Toronto native discusses her vision for the future of science in Ontario.

On the public’s trust in science

There’s been a real erosion in the public’s trust in science. I think there is a little bit of a vacuum in terms of public engagement in science, and people jump into that vacuum who have very little understanding of science. An example of this is what I call “celebrity science.”  There are a number of celebrities who have large voices and a large audience, but who aren’t necessarily representing the best interests of the public. Part of the challenge too, is that science isn’t always black and white. As scientists, we’re trained to question. But I think for the general public, that is confusing. They can be highly educated people, but still have a hard time discerning between the good science and the not-so-good science.

I think people have a really hard time trusting something that they don’t understand. So, in my role at the University of Toronto, I started a social media initiative called Research 2 Reality. The whole mandate is to use social media and create very short videos that explain what research is and why it’s important. We can let people know what Canadian scientists are doing and how their work impacts the public’s present and future.

Another thing that I’m working on relates to the intersection of art and science. In some of my research at the university, I work with beautiful images of biological cells and tissues. And across the country, researchers work with beautiful images of icicles, lakes and oceans, to name just a few examples. So as another way to reach people, I’m working on getting this kind of art in public spaces. As part of the CONTACT Photography Festival in May, we’re going to have an exhibit of images at the Ontario Science Centre. Hopefully, that will inspire curiosity, and get kids and adults excited about science.

On promoting Ontario as a research hub

I’m working on enhancing Ontario’s international reputation around innovation. Simply put, I’m letting the world know how fantastic Ontario is in terms of research. At this point, so early in my new role, I haven’t quite figured out how to do that, but I see great opportunities to work with my colleagues who are co-located with high commissions in various places around the world. We already have these relationships and connections, so it’s not like I’m starting from zero. Now, I need to figure out how to build on our already excellent international reputation, and extend that more broadly to the innovation economy.

I am also working on enhancing the government’s ability to make better decisions based on scientific evidence. Again, it’s not like I’m starting from zero. Of course, there are many ministries in the Ontario government that have access to data. What I’ve learned over the past couple of weeks is that some of our ministries have better practices than others. It’s really a great time to be Ontario’s Chief Scientist because I think there is a desire to work collaboratively and in partnership across government.

On pursuing science as a career

My parents really encouraged me to pursue excellence and the things that I’m interested in. I had some really great teachers in high school, too. I think that sometimes, society discourages girls from going into hard science, but that wasn’t my experience. I also had a great pediatrician, who happened to be a woman. So, in a sense, she was a role model for me. I was always interested in medicine and I ended up getting really excited about research, because with it, I felt like I could help invent the future. That’s something that’s really stayed with me. I hope I can inspire more girls, and also more boys, to pursue science as a career, because I believe it really incites curiosity and imagination.

Related: Kirsty Duncan on the future of Arctic research 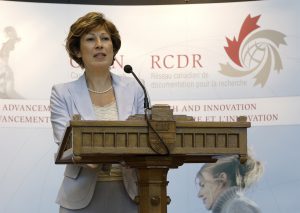 Dr. Mona Nemer, formerly of the University of Ottawa, steps into the highly-anticipated role