Though beloved for her books featuring plucky heroines, the celebrated novelist privately battled depression and the sexist attitudes of the early 20th century

Emily of New Moon, Sara Stanley, and of course, Anne of Green Gables: Canadian novelist Lucy Maud Montgomery is known and loved the world over for her strong female heroines. Spunky, ambitious, imaginative and enthralled with the natural world, they were imbued with many qualities Montgomery herself shared, but fought to express against the strict social conventions of her time.

A new Heritage Minute released today reveals the complexity and determination of the woman who brought those charming girls to life and, in so doing, achieved what few women at the turn of the 20th century could: a career as a bestselling author.

Based on Montgomery’s own journals, the Minute, produced by Historica Canada and Route Eleven, shows the author’s initial struggle to find a publisher for Anne of Green Gables and her lifelong battle with depression. But it also highlights her enduring love for her childhood home, Prince Edward Island, which serves as the setting for many of her 20 novels and more than 500 short stories.

“While millions are familiar with Anne of Green Gables, the obstacles she had to overcome to become a successful author aren’t nearly as well known or understood,” says Anthony Wilson-Smith, President and CEO of Historica Canada. “We hope this new Heritage Minute will change that.” 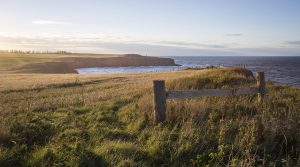 The landscapes that inspired “Anne of Green Gables”

In giving Anne Shirley her own deep love of and connection to Prince Edward Island, Lucy Maud Montgomery reveals the way place can fire the imagination