New book looks at economic solutions for the climate crisis

“We cannot sit on the sidelines anymore,” says Tom Rand, author of The Case for Climate Capitalism

A new book from author Tom Rand is looking at economic solutions for a planet in crisis.

The Case for Climate Capitalism investigates the cultural and political divide of the discussion around how to handle the climate crisis.

“This is not a political debate,” says Rand. “It’s a pragmatic debate about what tools can put a cork in emissions fast enough to get us out of this mess.”

Rand says his book is a challenge to both groups — both anti-market critics and climate-savvy business leaders.

“Lets not pretend we’re going to throw out capitalism, but at the same time business leaders need to stand up,” he says. “To those leaders, the business elite, they look to be on the wrong side of history unless they stand up and are forceful about the changes we need to make to get out of this trap that we’re in.”

The main themes of the book, out this week from ECW Press, include that pricing carbon is a given but only a starting point, that investors prioritize solutions that work with carbon pricing and can be implemented quickly, that the low-carbon sector is great for industry, and above all, that we do have the financial power to slow climate change.

Rand says that while individuals have to contribute to the solution, incremental change without systemic change will “take us off the climate cliff.”

“You can’t rebuild our economy in such a radical way without everybody being involved,” he says. “Democracy is a contact sport and we cannot sit on the sidelines anymore.”

An excerpt from The Case for Climate Capitalism

You don’t have to be a card-carrying socialist, or even an environmentalist, to want radical action on climate. That’s just good sense. Nor must you be a greed-is-good Wall Street titan to believe market forces, profit, and capital are critical pieces of that action. That, too, is good sense. Rewiring existing economic systems to lower climate risk could not be a more centrist notion. Yet it’s increasingly seen as radical: by the new left because it fails to reject capitalism outright, and by the new right because it implies massive market interventions. Our respective dogmas prevent the consensus needed to build a new economy that will get us safely through the century. These entrenched positions preclude finding workable solutions. But there is no contradiction between capitalism and forceful public action. This book is a plea to reengage on that centrist idea: Climate Capitalism as a radical rethinking of ideas as old as industrial civilization itself.

There are many conflicting positions on climate disruption. Getting bogged down in them isn’t getting us to a collective solution. That much is clear. But by exploring the key — and often opposing — positions, we can take what’s true and sensible from each to show us a new way forward. Climate Capitalism is a set of pragmatic solutions to mitigate the single greatest risk we face this century. It’s also a plea to put the bickering behind us and put those solutions in place quickly and aggressively. There’s no single perfect answer or magic bullet — but there is a clear path to the radical action we need. When your house is on fire, it does no good to argue about who started it, how hot it might get, or whether the insurance will pay; what you need is a good, fat fire hose. Climate Capitalism is that hose.

We need to move on from lobbing salvos from our preferred ideological camp. Adhering to a kind of moral purity on this issue is a liability, not an asset, and undermining others’ position is wasted energy, time, and social capital. If we don’t come together on this urgently to find solutions, everything we know will go up in smoke. Each view has merit, and each has flaws. Climate Capitalism urges us to find common ground to tackle this most pressing and confounding problem for good — our good.

Capitalism is neither good nor bad. It is shaped by local culture and politics. Far from being a single economic system, it comes in many flavors: Wall Street’s finance capitalism; Russia’s rough-and-tumble anarcho-capitalism; Indonesia’s crony capitalism; China’s state capitalism; the protectionism that dominated trade in the middle part of the twentieth century and the globalized markets of the twenty-first century; activist public sectors like Roosevelt’s New Deal; the unfettered markets of neoconservatives.

Capitalism is how we’ve done business since feudal times — an ongoing attempt to use markets as an organizing principle of our daily transactions. As economies have become more complex, the role of distributed decision-making in the form of market forces has become more crucial. The few ill-fated exceptions prove the rule that market forces will always play a critical organizing role in complex economic activity. The battle between left and right is mainly about the degree of freedom under which those market forces operate. Climate Capitalism is no more than a new set of rules, borrowing from both the left and the right, to make our economic system responsive to the climate threat.

The tide is turning. Technology is unstoppable once it gets going. Its sweeping changes are clear in hindsight: the engines of the industrial revolution; the microchips of the data revolution; the genetic and stem cell manipulations that herald a new era of human health. Similarly, clean energy technology, or cleantech, is igniting an energy revolution. Instead of digging up and burning stuff buried in the ground, technology will harness and store endless supplies of renewable energy. Cars will not use internal combustion engines for much longer. The economic dynamism at the dawn of the twenty-first century feels unstoppable. The potential of the creative class seems unbound. The human spirit runs hot.

But so does the planet. Lurking behind today’s technological optimism is the biggest, baddest dragon of modern times. Climate disruption threatens our civilization in ways the public is only just beginning to understand. Already we’re seeing waters rise, storms grow, rainfall patterns change, and droughts intensify as the atmosphere heats up. The greenhouse gases we’ve already emitted trap the energy equivalent of hundreds of thousands of atomic bombs in the atmosphere every single day. It’s not so much about heat, but energy. We’re destabilizing the atmosphere, shifting it into a new state.
These are the early stages of a very risky experiment, one that may already be spinning out of our control. The precautionary principle says we have a duty to prevent harm even when all the evidence isn’t in. Climate risk is more perilous than the subprime financial turmoil, China debt crises, terrorism, or the Middle East’s ongoing oil and religious wars. Global food security, the gift of the last Green Revolution, is no longer a given. A more turbulent atmosphere is the ultimate creative destruction, wrought by an economy seemingly unable to curb its excesses. Unchecked emissions guarantee a catastrophic outcome, even if the timing and details are uncertain. We’re way past the precautionary principle now.

Climate risk is qualitatively different from other threats. Once it spins out of control, there is no coming back, no second chance. Economic crises, security breaches, and terrorist activity are frightening and destabilizing. But they’re temporary. Humanity always bounces back, often quickly. A climate crisis is effectively permanent. The ongoing instability of an overheated planet will last longer than we’ve had an industrial civilization. As a threat multiplier, it exacerbates all other crises: food, security, economic, social. The only risks comparable in outcome are those of a nuclear winter or an aberrant asteroid. This really is our endgame. We have to get it right. Failure is forever.

Excerpted from The Case for Climate Capitalism: Economic Solutions for a Planet in Crisis by Tom Rand.
© 2020 by Tom Rand. All rights reserved. Published by ECW Press Ltd. www.ecwpress.com 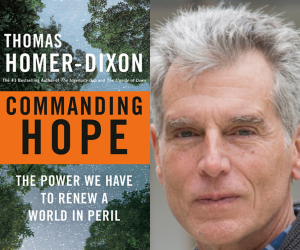