The celebrated Canadian novelist's first foray into comics is for the birds. But also the cats.

Cats everywhere finally have the superhero they deserve. But wait: he’s also part bird. How does that work?

That fundamental conflict of interest is explored in Angel Catbird, the forthcoming first comic book from acclaimed novelist Margaret Atwood, with art by Johnnie Christmas and colours by Tamra Bonvillain, published by Dark Horse Comics. The comic follows the adventures of a young genius who accidentally gets a dose of his own gene-splicing serum and winds up with superpowers derived from both a cat and an owl. ‘Angel Catbird,’ as he comes to be known, is recruited by the mysterious Cate Leone to help stop their villainous and decidedly rat-like boss, Dr. Muroid, from obtaining the serum for his own nefarious purposes. What ensues makes for a darkly hilarious read loaded with cat puns — and an important conservation message.

Atwood partnered with Nature Canada to tie the comic to the conservation group’s Safe Cat Safe Bird campaign, which asks cat owners to pledge to keep their pets indoors. Scattered throughout the pages of Angel Catbird are facts about the hazards faced by free-roaming cats, which include cars, disease and predation by larger animals. Readers will also learn that cats, whether feral or well-fed, kill an estimated 200 million birds per year in Canada, which is contributing to the precipitous decline in songbird populations across the country.

Canadian Geographic spoke to Atwood about the process of creating Angel Catbird and its lessons for cat and bird lovers.

How did Angel Catbird come to be?

I’d had this idea probably dating back to when I was six, when I would draw flying cats with wings. In more recent years I had made some preliminary sketches but it was obvious to me that I couldn’t draw the comic I wanted. I wanted something along the lines of superhero comics, but I needed to put it together somehow. As fate would have it, a person on Twitter, Hope Nicholson, was raising funds to resurrect forgotten Canadian comics of the 1940s. I told her about Angel Catbird and she connected me with Johnnie Christmas and Daniel Chabon, the editor at Dark Horse Comics.

It’s all just been a lot of fun. It’s a lot like writing a film script in that it’s a collaborative activity; we go back and forth on what things should look like. [Cate Leone’s] nightclub outfit is based on some of my preliminary sketches.

Why did you choose an owl to be part of Angel’s genetic mix?

The Owl and the Pussycat! It also made the mix more interesting. I needed something with big wings and talons. In a fight or flight situation, an owl would be more likely to fight than, say, a robin. Of course, if I were to be absolutely true to nature I’d have to make it a red-winged blackbird. They’re quite scrappy.

Have you had many cats in your life? What do you admire about them?

I got my first cat when I was eight, and I had cats really up until the latest two got old and died. We decided we were getting a bit too old to have more because they do lurk on the stairs and can be a tripping hazard. What do I admire about them? They like to help me write, usually by getting on the keyboard. They each have a personality, no question.

What do you hope people take away from Angel Catbird?

I hope they will have a good time, because of course if it’s not entertaining, you don’t turn the page. But comics have always had a potential educational dimension; Wonder Woman started in the Second World War as a fighter on the side of the Allies. I always wanted to do Angel Catbird in partnership with somebody in bird conservation, and I felt it should be a Canadian conservation partner. Nature Canada happened to be doing this campaign and had all the statistics to back up their message.

Angel Catbird will be available Sept. 6. 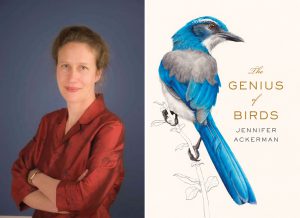 Jennifer Ackerman on new book The Genius of Birds

Ask Jennifer Ackerman whether being called a birdbrain is an insult or a compliment, and she’ll tell you that there’s no question it’s the latter