An intricate network of trails and water routes overlays the northern Yukon’s Old Crow Flats, the ancestral homeland of the Van Tat Gwich’in. These are the pathways the people of this northern First Nation have used for millennia to move around their territory, hunting, fishing, trapping, gathering berries and plants, coming together in gatherings and travelling into the Northwest Territories and Alaska to visit relatives and trade. Until recently, the maps of most of these routes existed only in the minds of those familiar with them, but the Van Tat Gwich’in — who for years have been making meticulous records of their own cultural heritage — have changed that. The ambitious Van Tat Gwich’in Navigation Systems Project, now in its final stages, makes an enormous amount of knowledge about the routes readily available.

Anthropologist Shirleen Smith has been working for the Van Tat Gwich’in for more than 15 years. “People’s patterns and modes of travel have changed over time,” she explains. “The trails and routes are important because they give access to the places people still need to go. The elders could see that the knowledge of many of the routes was in danger of being lost, because most young people don’t know them.”

Directed by a local heritage committee, Smith and Van Tat Gwich’in researchers began in 2011 by talking with the experts. “We interviewed older people who remembered the routes that are no longer used, and active hunters who regularly use trails. Middle-aged and younger people who had been raised by their grandparents were a good source; their grandparents had passed on the knowledge to them.”

Then the researchers travelled each route from one end to the other — by foot, boat, snowmobile or helicopter — noting the GPS coordinates, taking photographs and videos, and listing place names and important features such as burial sites.

Four years later, 37 routes have been mapped and there are hundreds of photos, a long list of place names and videos of the trails. Gwich’in and English signs and trail markers now identify important places and mark the head and foot of portages.

Some abandoned trails will be reopened, a task which “shrubification,” an effect of climate change, has made more difficult. “There are more shrubs now,” says Smith. “The less-used trails grow over quickly. On trails that follow creeks the willows and alders get very dense, making it hard to travel. Reopening a trail is much more work than it used to be.” Other trails will remain overgrown, she explains. “Many of the old dog-team trails aren’t practical today, because they’re difficult for snow machines. They’re narrow and have steep climbs and drops, especially near creeks. Dogs can handle that kind of terrain more easily than snow machines.”

The success of the Van Tat Gwich’in projects, says Smith, is a testament to the people on the heritage committee and the elders who preceded them. “They want accurate information for themselves and are determined to get it. They’re recording their heritage, not as an academic exercise, but as living knowledge that people can use.” 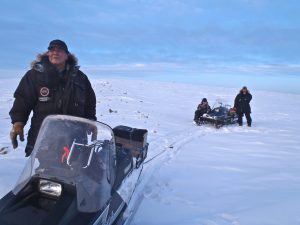 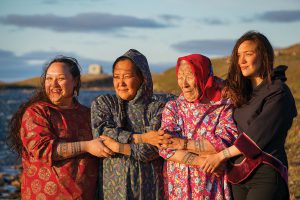 Kakiniit: The art of Inuit tattooing

Inuit tattoos, or kakiniit, were once banned. Now they are worn with pride.