Last Tuesday's lunar eclipse was the beginning of a tetrad

If a cloudy sky or want of sleep kept you from seeing the “blood moon” early Tuesday morning, you’ll have three more chances to see red in the sky.

This week’s lunar eclipse was the first of a tetrad, which is when four consecutive total eclipses occur at about six-month intervals.

“It’s a very cool time to be looking up at things in the sky,” says science journalist and author Peter McMahon. “Folks in most of Canada will have the chance to see a lunar eclipse every couple of seasons for the next couple of years.”

But while these events are suddenly popping up regularly, they are still very rare.

In terms of viewing experiences for Canadians, McMahon says these are four solid ones. Those on the West Coast will be able to see the whole eclipse from start to finish, but the more east you go, the less you will see.

A lunar eclipse occurs when the Earth blocks most of the light from the sun, causing a shadow over the moon. The bit of light that bends around the earth’s atmosphere is refracted and hits the moon, causing it to glow red.

Conveniently, stargazers don’t have to leave the city to get a good view.

“A lunar eclipse doesn’t fall prey to light pollution troubles that deep space phenomenon fall prey to,” McMahon says. “But there are some subtleties you will miss if you are not in a rural area.”

The moon will also appear a different colour — from light orange to a pinky red, or even brown — depending on your exact location and the time of year. For instance, if a recent volcanic eruption has occurred in close proximity to the stargazer, the ash in the atmosphere would be enough to make a difference.

“It’s not the moon changing,” McMahon says. “We’re seeing a filter of our own atmosphere.”

There are other sightings to look out for on Oct. 8 while waiting for the lunar eclipse. Jupiter will be southeast as one of the brightest stars in the sky. The constellation Orion will also be in full view, with the Orion Nebula appearing to the naked eye as a gray-green rose-shaped cloud. To those with telescopes, it will resemble a long-exposure photo. 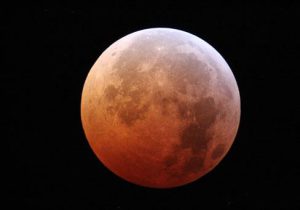 A ‘Super Blood Wolf Moon’ will appear over Canada this Sunday

There is only one total lunar eclipse to be seen in 2019, and it's set to colour the moon red tonight