Inside the Toronto Zoo's bison breakthrough

For the first time ever, a Canadian zoo has successfully produced a calf from an embryo sent from another province. Here's what that could mean for species conservation.
By Hannah James
Advertisement

Gabriela Mastromonaco has seen many babies born at the Toronto Zoo, but when her zoo colleagues called her on July 11, 2017 to say that a new wood bison calf had arrived, she felt a mixture of excitement and disbelief.

The event marked the first time a Canadian zoo had successfully produced a wood bison calf from an embryo sent from another province and transferred into a surrogate dam.

“I must admit, I checked the records ten times to make sure it was the right calf from the right embryo transfer and not just an artificial insemination calf,” says Mastromonaco, a reproductive physiologist and curator of the Toronto Zoo’s reproductive research program.

The zoo’s embryo transfer is a huge step forward for conservationists. While the Toronto Zoo has been freezing living cells such as sperm and embryos in biobanks for years, researchers now know that it’s possible to send frozen, healthy embryos to places where they are needed most. In this case, the embryo came from a lab at the University of Saskatchewan.

The Toronto Zoo has been working to revitalize threatened wood bison herds since 1977 by breeding animals and introducing them into herds in the wild in places like Manitoba.

It’s estimated that 168,000 wood bison once roamed and grazed in Canada’s boreal and aspen forests, but a combination of overhunting and diseases such as brucellosis and tuberculosis had decimated the animals by the mid-1800s. Today, only a few thousand wild wood bison remain in Alberta, Manitoba, British Columbia, Yukon and the southwestern region of the Northwest Territories.

The challenging thing about keeping wood bison populations alive, says Mastromonaco, is that disease can live on in herds subliminally and present in phenomena such as spontaneous abortions, low reproductive rates and infection in calves.

Gregg Adams, a reproductive biologist and professor at the Western College of Veterinary Medicine at the University of Saskatchewan has been working on a solution to this problem for years. In 2006, Parks Canada shipped a herd of 50 wood bison from Alberta’s Elk Island National Park to Saskatchewan and the Wood Bison Research Group was formed.

“We decided that we could solve this through reproductive technologies, and the reason we can do that is because we can move semen, eggs and embryos far easier than we can move live animals,” says Adams. “It’s a much more bio-secure way. We can actually wash the embryos and the semen free of these infectious organisms and produce disease-free babies — at least, this was the theory,” he says.

The evidence that Adams’ theory works can now be seen frolicking around the Toronto Zoo’s wood bison enclosures.

Mastromonaco says if it’s possible to move genetic material from the wild into captivity and back again, it might mean that there’s hope of storing genetic material to draw on in cases of epidemics, natural disasters and other extinction threats.

“It’s long term preservation,” she says. “You have the insurance material available to you so that you’re able to work with populations globally instead of regionally and that you’re able to move without barriers. The wild, captivity, et cetera — it all becomes one.” 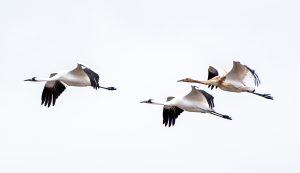