How often do whales attack ships?

Whales attacking ships are rare (Moby Dick notwithstanding), but a few incidents have been documented through history. Here's why.

Moby Dick, arguably the most famous whale ever, was never real. But the vindictive fictional cetacean was inspired by the tale of a real-life sperm whale, which attacked and sunk the whaling boat Essex in the southern Pacific Ocean on Nov. 20, 1820.

Now, Hollywood is recreating that unusual tragedy. Chris Hemsworth stars in the Ron Howard-directed In the Heart of the Sea, which opens Dec. 11, 2015.

Whales attacking ships are rare — indeed, just a handful of such incidents have ever been documented. Here, two Canadian scientists — Stephen L. Cumbaa, emeritus research scientist, paleobiology at Ottawa’s Canadian Museum of Nature and Lance Barrett-Lennard, senior scientist and head of the marine mammal research program at the Vancouver Aquarium — explain the history of whale attacks and what might provoke them.

On the frequency of whale attacks

Barrett-Lennard: The really good, well-substantiated accounts of whales attacking ships date back to whaling days, and there are a couple of classic attacks, one of which is the attack on the Essex that inspired Moby-Dick. What’s amazing to me is that these accounts of attacks are so few and far between. Given all the contact between boats and whales and people and whales, collisions are relatively rare and attacks are extremely rare.
Cumbaa: For the most part, whales are docile creatures and they want to be left alone to pursue their own mating and hunting. Whaling was usually a cold, wet, smelly and dangerous — albeit lucrative — occupation, and fatalities from harpooners getting tangled in lines, or when a whale turned or sounded and came up to smash the small hand-rowed pursuit boats were common. Stories about incidents such as that which befell Essex and similar large ships are very rare. But they are very interesting and compelling.

Barrett-Lennard: Being poked by a harpoon is a pretty good incentive to turn on whatever is attacking you. Grey whales can be quite feisty. Male sperm whales can be quite feisty with each other, too, so it’s in their nature, in a sense, to understand and be able to aggressively intimidate rivals. So it’s not really a surprise that if either species was being attacked by humans, by whalers in particular, that from time to time they would turn on their harassers. The surprising thing is that during the commercial whaling era they didn’t do it more often.
Cumbaa: A completely unprovoked attack would be out of the nature of a whale. So I don’t know whether it was mating time or there had been some injury done. For whatever reason, in the case of the whale that attacked the Essex something had gone wrong in the brain. It’s pretty clear it did attack, and it doesn’t appear to have been a result of a direct provocation at that moment.

Cumbaa: Sperm whales are pretty unique. They grew to very large sizes and they’re certainly aggressive. They’re the largest toothed whale. They’re not as sharp, but their teeth are Tyrannosaurus Rex-sized. They dive down to the real depths of the ocean and hunt giant squid, and there are many, many instances of these whales coming up with big sucker marks on them. These are the largest whales that directly attack big prey.
Barrett-Lennard: Scientists have been struggling to figure out what evolutionary pressure drove their unusually large head shape. One of the theories is that their heads are battering rams, that males in particular use them in contests. I guess we would call these head-butting episodes fighting. It would kind of go along that there’s this pre-adaptation in the case of sperm whales to attack.

Cumbaa: It’s an awfully big ocean out there. While there are thousands, and sometimes tens of thousands, of any one species of whale, when you spread that over the entirety of a whale’s range, even a seasonal range, that’s not a lot of whale per unit of surface area. Today, most ships go in commercial shipping lanes. They try to follow a kind of path, which whales tend to avoid. If they frequently encounter things that are large, noisy and smelly, they’re going to steer clear.
Barrett-Lennard: I don’t really have a good answer for that. What I can say is that whales generally are pretty conservative animals. These incidents of whales being harassed by something on the surface like a boat are really something that’s come up recently in evolutionary history, and it was relatively infrequent, even during the heyday of whaling, for any given whale. Our encounters are infrequent enough that whales haven’t had an opportunity to develop the kind of aggressive responses to human that might actually be appropriate in a lot of situations. 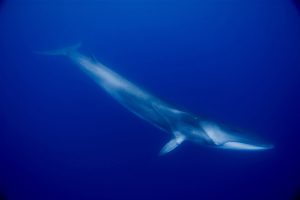