Thirty-five years after North America’s most infamous volcano erupted, only one organization is allowed to lead you into its crater

“We take you right in there,” says Amy Tanska, Development Director for the Washington-based Mount St. Helens Institute (MSHI). “The volcano’s crater is [two kilometres] wide and almost [three kilometres] long — it’s enormous. And we’re still the only organization guiding people on these trips.”

That’s because the U.S. Forest Service will only grant the permits strictly required to lead visitors down into North America’s youngest volcano to the MSHI. There are tour groups based out of Seattle, Wash., or Portland, Oreg., that also offer volcano visits, but they provide vantages of the crater — not the chance to tread into it. The MSHI, meanwhile, receives 36 of the special visitor permits for its “Into the Crater Hike” each year, with the rest going to researchers who have been monitoring seismic activity, reclamation of the devastated landscape and more since Mount St. Helens blew its top in 1980.

The non-profit MSHI has been around since 1996. And while they offer this and other guided hiking adventures in the Mount St. Helens area (always with high ratios of guides, naturalists, geologists and other staff to participants), their real mission is “advancing stewardship of the Earth through science, education and exploration of volcanic landscapes” — with a special focus on North America’s youngest and most active volcano. So when you pay $600 for the Into the Crater Hike, which includes two overnights at a base camp, a full day of guided hiking and spectacular meals, the MSHI turns that revenue into opportunities for young students to visit the camp and blast site, where they get to work with scientists conducting research in the area.

That way we can make the kids’ trips inexpensive or free,” says Tanska. “We want to inspire our future ‘ologists’ — geologists, ecologists and so on.”

The adventure begins with an overnight stay at the rather luxurious MSHI base camp, at around 1,200 metres elevation. Before 1980, the treeline would have been 240 metres higher still, but because the camp is inside the blast zone, most of the surrounding area is still slowly returning to life after obliteration. “The vegetation is at most 35 years old,” explains Tanska, “small growth and micro-growth, even — one little leaf here and there in some places. The recovery is happening, but at a pace that’s based on what the environment can give it. The soils are not quite ready for large trees.”

The hike itself is nearly 20 kilometres round trip, with a pair of stream crossings and a few kilometres of fairly challenging, uneven terrain on the way to the crater. The group scrambles over the remnants of the largest landslide in recorded history — the collapsed northern flank of the mountain — and traverses the barren pumice plain on the same side, which was piled up to 40 metres deep as the volcano continued to flow after the initial explosion.

The MSHI team splits up to match pace with the different hiking speeds in the group. “Our focus has to be safety first,” says Tanska. “We know the route, we understand the protocols and the seriousness of being in such a remote area.” And rather than hiking in a line, everyone is instructed to fan out in places to minimize repeated damage on ground that has never had boot prints on it before. “There are so many tiny plant and animals here, all trying to get a purchase,” says Tanska. “You really have to watch every step so you don’t smush the tiny lupins, but also because it’s never been tamped down into a solid trail.”

And what about visitors who might be nervous to step into a gaping, high-walled crater that a mere 3½ decades ago was covered by 400 metres of mountain full of furious volcanic activity? “There are always questions about the possibility of an eruption,” says Tanska, who recalls watching the colossal ash column as a child growing up in Washington, east of Mount St. Helens.

But the night before the hike (after a hearty meal along the lines of grilled Washington salmon, homemade sourdough rounds and caprezi salad), a geologist primes the group with a campfire presentation about the crater and Crater Glacier [which formed after the 1980 eruption]. Visitors hear about the decades since 1980, but also about the past 4,000, 40,000 and 100,000 years. “And they also learn that this is the most heavily monitored volcano in North America, if not the world,” adds Tanska. “One of the monitoring stations that we take hikers by can pick up elk walking a mile away.”

“There comes a point when you absorb the enormity of the fact that you get to stand somewhere that did not exist 35 years ago, that was not accessible because it was the interior of a strata volcano,” says Tanska. “And coming to that realization just floors them.” 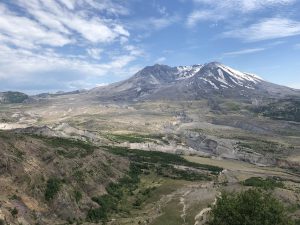 What Canada can learn from the eruption of Mount St. Helens

On May 18, 1980, Mount St. Helens exploded in the largest volcanic disaster ever recorded in the United States. Forty years later, work continues to understand the eruption and its aftermath — with some surprising Canadian connections.