Excerpt from Sweet in Tooth and Claw: Stories of Generosity and Cooperation in the Natural World 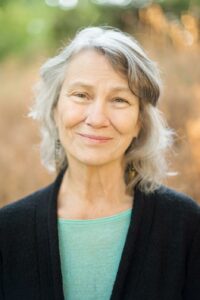 Years ago, I joined a group of women and a few men at an art gallery in the Murray Hill neighbourhood of Cleveland, Ohio. It was supposed to be an evening of journaling and shared feelings and uplifting conversation—stuff that makes me a little skittish, then more than now—and I can’t even imagine now what convinced me to go. I remember so little about the event—was the Lego-like brick street outside slick with ice, as it so often was? Did I still have young children waiting for my return at home? But one trick of the convener stays with me still. We were all sitting on the floor, knee to knee, and she asked us to look around and make a mental list of all the blue things in the room. There were quite a few of them, and I quickly jotted them down in my brain. Then we closed our eyes, and one by one, the convener asked us an unexpected question. Name one of the yellow things in the room! As I recall, no one—and certainly not I—could remember anything yellow because we were all so intently focused on blue. The yellows had faded into the background along with the greens and purples and reds, erased by our inattention.

The exercise buttressed one of the themes the convener would pursue that day, that what we decide to focus on not only informs our view of the world, but will also guide our path through it. I found that idea valuable as my life went on its twists and turns, especially during times of fear or despair. During the recent pandemic, for instance, our walks with the dogs offered many small distracting wonders if I remembered to look for them: moss growing in old lettering on the sidewalk, clouds of excitable bushtits settling into an overgrown shrub, bark peeling like ringlets off a birch tree. All the couples walking hand in hand around the neighbourhood, keeping a respectful six-foot distance from everyone else. Neighbours having tiny, candlelit parties on their lawns throughout the summer and fall. The young musicians who brought a bass and a violin to the small park across the street from my house and played for an hour. People who went into a frenzy of giving, as much as they were able, to others harder hit by the disaster. As the wonderful Fred Rogers (Mr. Rogers) said on the first anniversary of 9/11, “Look for the helpers.” There were so many helpers.

I’m naturally drawn to optimism, which is a gift from my sweet father. I actually worried that I might just be soft-headed until I read this quote from activist and professor Angela Davis: “I don’t think we have any alternative other than remaining optimistic. Optimism is an absolute necessity, even if it’s only optimism of the will … and pessimism of the intellect.” But it’s hard to hang on to optimism. Like others—probably you—I panic at the growing, undeniable evidence of humanity’s damage to the natural world around us, and fear we’ll never get our shit together to do anything about it as our politics and cultures continue to clash in the nastiest of ways. When I wrote my previous book, The Soil Will Save Us, I discovered a wellspring of optimism as I met farmers, ranchers, scientists, and others figuring out how to restore damaged agricultural landscapes. But if the world is characterized by greed and grasping and selfishness, as so many people believe, would the growing numbers of ordinary ecological heroes be enough?

Then I heard Canadian forest ecologist Suzanne Simard speak at the 2015 Urban Soil conference in Los Angeles. For the last thirty years, she’s been uncovering the hidden cooperation among trees and other living things in the forest. In the process of writing The Soil Will Save Us, I was thrilled to learn about the life-giving partnership between plants and soil microorganisms. Really, it was the greatest of revelations to find out that plants don’t just suck nutrients from the soil and leave it as barren of goodness as a Twinkie, but are engaged in a constant give-and-take with the billions of tiny organisms there. At the conference, Simard talked about this kind of fertile partnership spread out across the forest landscape, powered by a vast underground skein of fungi. I almost levitated from my seat with excitement.

I drove from Portland to Vancouver that year to talk to Simard and her students, but it took me a few years to find other researchers and landscapes yielding similar insights. As they accrued, I felt as if I was really on to something worth writing about. Most of us have forgotten much of what we learned in science class, but a few concepts persevere—and “survival of the fittest” is certainly one of them. Charles Darwin posited that the species we see around us today are the winners of a challenge that’s been going on for nearly four billion years; all living things are the culmination of changes passed on from ancient forebears that made them more successful at harvesting resources, avoiding predation and other dangers, and reproducing. Other thinkers pounced on Darwin’s findings and enshrined the concept of competition as biology’s brutal architect. The idea that competition rules has been lodged in our collective brains ever since. Even if people reject the theory of evolution or can’t quite recall how it works, they still think of nature as “red in tooth and claw,” as the poet Tennyson wailed—a vicious and never-ending battle of survival for meager resources. Even many scientists don’t grasp how pervasive cooperative interactions are in nature. “Today’s ecologists grew up with the paradigm of organisms primarily competing with each other,” biologist Richard Karban told me. “A lot of ecologists are surprised by how much cooperation exists among plants and other organisms. They’re not looking for it in their research.” Consequently, we seem to have developed a zero-sum-game view of nature, suggesting that whatever we take—we humans, or those ravens, cypresses, invasive garlic mustard, or any living thing—comes at the expense of other living things and the overall shared environment. As we humans keep growing in number, this view suggests, it must regrettably follow that the rest of the world will suffer.

But what if we’re applying Darwin’s insights wrongly to the world and thus missing the generosity and cooperation that exist in the natural world? That’s what Simard’s research suggested to me. And if we are missing the generosity and cooperation in the greater world, we are likely also missing these harmonious connections in ourselves. Because we are part of nature, of course. We exist because of complex, vibrant, creative relationships with the rest of nature and are as much a part of it as the raccoon lounging in the tree near my front door or the grasses growing along the highway. How might our behaviour change if we understood the extent to which cooperation within and among species undergirds the natural world and makes it thrive? If we looked for that cooperation, just as I was instructed to look for the blue things in that gallery? Could we begin to see ourselves as partners and helpers, part of a greater fabric of giving, instead of exploiters and colonizers and wreckers?

It seems to me that the best and highest use of science these days is to figure out how nature works—as many of the brilliant scientists I interviewed in this book are doing—and then to help humans change our behaviour so that we can roll back the damage we’ve already done and avoid further damage. So that we encourage and bolster the world’s hunger to thrive. And not just because that would benefit us, although it certainly would, but because other life-forms have as much right to flourish as we do and don’t exist for our use. Many scientists are learning from the ways in which older cultures understood their place within nature and how they balanced human needs with the needs of the other living things. I’m convinced that if we can learn to respect, not ravage, the rest of nature, we’ll also become more generous and nurturing with each other. “What you do to the people, you do to the land,” says Gopal Dayaneni, an activist with the Movement Generation Justice and Ecology Project. “And what you do to the land, you do to the people. This is a common concept across many Indigenous and land-based traditions.”

The person who might best articulate this respectful bond with the rest of nature—at least, I’m smitten with her writings and recordings—is the Native American botanist and writer Robin Wall Kimmerer. Humans must take from nature to survive, she says, but we have to make sure it’s an honourable harvest. Never take the first plant or animal or the last. Ask permission: the world is generous and creative, but sometimes the answer is no, and science is a powerful tool for understanding that limit. Do as little harm as possible. Practice gratitude. Share. And reciprocate—we need to learn how to give back.

We humans are engaged in so many harvests, and they are often not honourable. When we take fish from the ocean or grow tomatoes in a field; when we seize land from the prairies or forests to make a home or a city; when we divert water for our urban areas or for agriculture; when we take the labor or the confidence of other humans … all are an opportunity for honour. Parts of this book look at the cooperation and mutually beneficial connections that hold together the creatures and ecosystems in and around us; I find that to be thrilling science. But for me, the most thrilling parts of the book look at how people are acting on new understandings of what the rest of nature needs from us. They are deciding to be partners with the living world, partners with each other in this mission, and showing that bleakness does not have to be our shared fate.

Excerpted from Sweet in Tooth and Claw: Stories of Generosity and Cooperation in the Natural World ©2022 by Kristin Ohlson. Reprinted with permission by Patagonia.

For those readers interested in the sources this book draws from, please visit the book’s page on patagonia.com