Taking a closer look at Kingston's museums below the surface

It’s deep, dark, cold and murky, but there is nothing else I would rather be doing than exploring Kingston’s shipwrecks 30 metres below the surface.

If you have ever visited the city of Kingston, Ont., you are probably aware of popular tourist attractions like Fort Henry, the Penitentiary Museum and the numerous heritage buildings and houses that make up the “limestone city.” But if you venture out a little further (and a little deeper), you will encounter some of the best freshwater shipwreck diving in the world.

Located where Lake Ontario meets the St. Lawrence River, Kingston stood as a strategic military centre during the 1800s when ship traffic was heavy. Roads of the time were poor, so most products and materials had to be carried by ship — imagine Highway 401, but on the water. Vessels converged on Kingston carrying all manner of goods — from coal to building supplies to Canada’s short-lived capital (1841-1844). Many ships didn’t make it to their destination and the surrounding waters today hold a graveyard of shipwrecks just waiting to be explored.

The Great Lakes were notorious for sudden storms and high winds, often taking captains by surprise. The most dangerous section was between Kingston and Niagara around Picton, which is located on a peninsula of rolling farmland. There are thought to be more than 50 shipwrecks in this area — each with its own story to tell.

These shipwrecks stand as capsules of time, frozen in near-pristine conditions by the frigid waters. And what remains creates a unique underwater museum of artifacts that shines a light on Kingston’s past while also creating magnificent scenes for underwater explorers.

The dive community in Kingston claims this area holds the best freshwater shipwreck diving in the world. An avid diver, I decided to explore these underwater museums for myself.

Decked from head to toe in a seven-millimetre wetsuit and nearly 45 kilos of gear, I headed out on Lake Ontario for the chance to experience some of the most unique dives of my life. Over two days, I embarked on three dives of varying depths and saw first-hand just how spectacular these underwater artifacts really are.

Dive one: The George A. Marsh

In the dark of night on Aug. 8, 1917, the George A. Marsh met its fate after a near 10-hour battle with a summer gale. A three-masted schooner (a type of sailing vessel), the George A. Marsh was carrying 14 men, women and children, 12 of whom perished. Winds caused the waves to get so big that the timbers on the ship’s side ripped apart as water flowed in. The vessel got heavier and heavier until it ultimately sank to the bottom, where it lies approximately 25 metres below the surface.

The Marsh was built in Michigan City in 1882 and was a lumber carrier until 1914, when it was sold to a man from Belleville, Ont., who used it to transport coal. From bow to stern, the Marsh is about 40 metres and lies nearly fully intact. While diving this wreck (which has been explored by Jacques Cousteau), you can find deadeyes, tools, pottery and even a stove.

Diving this wreck was definitely a surreal experience. I had not dived in Lake Ontario since May 2015 and this first dive was a bit of an adjustment — getting acclimatized to the cold water as I found my bearings below the surface. The descent took several minutes as I clung to the mooring line connecting the buoy on the surface to the ship dozens of feet below. Guillaume Courcy, co-owner of Neptune & Salacia Diving, described the water as “pea soup” — it felt “thick” and was green as the result of an algal bloom. It wasn’t until we reached a depth of about 15 metres that the water cleared up, just barely.

The ship came into view, and I released my grip from the mooring line to follow Courcy around the vessel. The visibility was weak and the water was darker than I expected but the experience of exploring this shipwreck only made me want to see more. We made several trips around the boat using underwater flashlights, observing goby (a bottom-dwelling fish) and even an endangered American eel. The bottom time for this dive was 32 minutes.

Resting at a depth of about 35 metres, the Eureka is a double-masted schooner that sank on Nov. 1, 1883. The vessel was coming from New York with a load of coal and was carrying a crew of six. The ship was caught by the high winds and began taking on water in the middle of the night. Thankfully, the crew was able to remove the lifeboat and make their way off of the quickly sinking ship. They drifted for eight hours, bailing frantically, before landing ashore and seeking refuge in a farmer’s home. According to Pat Cayne of Pat’s Dive Charters, the captain lost a new jacket with $30 in the pocket during the sinking — a hefty amount of cash at the time.

Diving this wreck was deep, dark, cold and incredible. I have experienced diving at depths of more than 30 metres in the past but never at this temperature (10 degrees Celsius at the bottom). I was warned about the cold front that would hit during the descent but was surprised by just how cold it was. As the ship came into sight, so did the frigid water. For this dive specifically, I was provided with another layer for my wetsuit, something that I was very thankful for.

On this dive, I was able to see the anchor, the ship’s wheel, some crew cabins and even the crow’s nest. On the stern of the Eureka, a brass porthole can also be seen alongside a space where another used to be.

Because of the temperature and depth of this dive, our bottom time was only about 10 minutes compared to our other dives, which would be closer to 40.

A beautiful side-wheel steamer, the Comet was built in Kingston in 1848 and sank on May 14, 1861, after colliding with another ship. The most notable features of this wreck are the twin paddle wheelers on either side of the vessel that remain fully intact. The Comet is about 53 metres long and lies about 25 metres below the surface. Although much of the ship has collapsed, the intact wheels on either side create an almost other-worldly effect.

Although the visibility of this wreck was the weakest (about 2-3 metres), it was definitely my favourite. The paddle wheelers and masts create an underwater playground for divers to explore and manoeuvre through. Looking up while at about eye-level with the ship, I noted that the wooden structure was contrasting with the light from the surface, creating a scene straight from a movie.

Who to dive with: Neptune & Salacia Diving

“In Kingston, museums are not all located on dry land…” This is one of the phrases co-owner Guillaume Courcy uses to describe the incredible diving in the Kingston area. A treasure trove of sunken artifacts, the shipwrecks around Kingston are truly capsules of time and should be on the bucket list of any underwater explorer.

Neptune & Salacia Diving began offering charters on Sept. 1, 2020, and opened a dive shop in September 2022. The shop is run by Martine Roux and Courcy, both experienced divers who purchased Dorothy J, a tug-style boat that is the first PADI dive boat in Canada.

Other popular dive locations include Brockville and Tobermory in Ontario and Barkley Sound in B.C.. But Courcy believes Kingston tops the list due to the concentration of shipwrecks in such a small area. “In all honesty, I believe we have more to see and more beautiful shipwrecks here in Kingston than anywhere else,” he says. “Kingston used to be the first capital of Canada. I think it could become the capital of diving for Canada.” 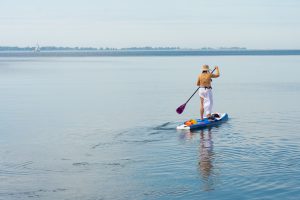